How to get the money to quit work and travel

“How do you afford to travel?”

This is by far the question I get asked the most, in real life, on the internet, politely and not so politely. We have been travelling for just shy of eight months: four and a half in the US and Canada and three in South America. We don’t aim to go home before July 2016. So it’s a valid question, but with a very boring answer. So let’s get started.

All my prices are in Australian dollars unless otherwise specified.

Coming up with a budget

It was really difficult to figure out how much money we would need because; we didn’t know exactly how long we would be gone for and because we are travelling to multiple countries of varying expense. When researching how much we would need, Andrew frequently read that $100 (about $73 American when we left, sadly the Aussie dollar is worth less now) a day would be adequate. So that’s what we aimed to raise each, knowing that some places we would spend less and some days more.

Not having an end date made budgeting hard. So I really just aimed to save as much money as I possibly could. At one point I managed to save about $10,000 in 2.5 months, which I was proud of.

In the end I saved $35, 000. Add the cost of my flight to LA, 3 other domestic flights, visa costs, the yellow fever vaccine and the Inca Trail trek cost on top of that.

We paid for the Inca Trail 6 months before we left home, so it felt free!

First up, make travelling your priority. If you’re not prepared to stop upgrading your iPhone and television, or buying clothes on a whim then maybe long term travelling isn’t for you.

I got completely addicted to saving money. I put a chart on my cubicle at work with a big ‘$30,000’ at the top and loved adding to the tally whenever I could. I used to transfer about half of my pay into my savings account the day I got paid. And then at the end of my two week pay period I would transfer whatever was left in my everyday account over to savings as well.

I have a high interest savings account with a different bank to my everyday bank. That means that it takes about 3 days to move money from one to the other. Three days is annoying but it’s more than enough to stop impulse transactions for impulse purchases. I could never be on a night out, or out shopping and think ‘I’ll just transfer $100 out of savings for this, it won’t hurt!’.

So I went out less, stopped buying clothes, makeup, coffees. I housesat at the beach for three weeks for free instead of taking a holiday or going home at Christmas. Really when you have a goal it’s easy to say no to things.

I literally sold everything that I wasn’t planning to take with me, except for some boxes Mum is kindly storing for me. Selling and purging stuff also became addictive.

I sold clothes, furniture, accessories and lots of random stuff. It’s kind of amazing what people will buy. I had someone buy two old bottles of perfume from me for $10. My biggest sale was my car for $3700. I sold things on facebook, at a market and at a consignment store and I wrote a blog post all about it called 5 tips for successfully selling your old stuff.

WHEN YOU GET THERE

First and foremost, we are extremely fortunate that Andrew’s grandfather leant us his car for our USA/Canada road trip. There is no way we would have been able to cover 10,000 miles in a hire car due to the cost. I know people sometimes buy cars for their road trip but aside from the obvious cost of the car itself, there are probably added costs of insurance and registration and the chance of ending up with a dud. We are extremely grateful.

Fuel was usually around $US40 when we fill up.

Over 3 months in South America we’ve only taken 3 flights and the cost of each of those was comparable to a bus ticket. We’ve taken many buses, including overnight buses which are horrible (I can never sleep) but they mean you save a night’s accommodation as well. Within cities we walk everywhere and take the occasional taxis which are pretty cheap anyway. 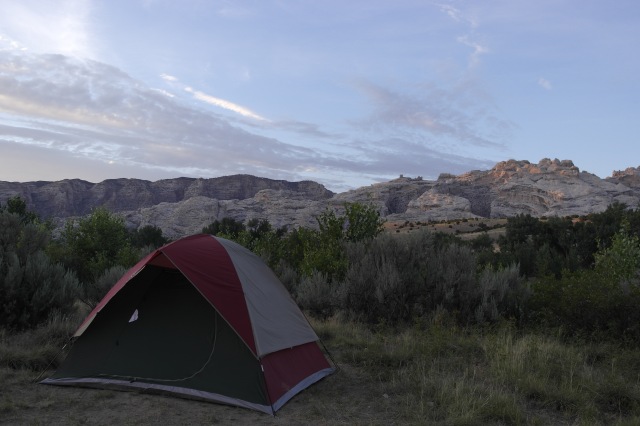 Part of the reason for travelling to America was to visit Andrew’s family and again, we are so lucky and grateful that we have been able to stay with them and that they have been so very generous. It’s safe to say we wouldn’t have been staying on the Malibu beachfront otherwise. Thanks Eric and Adrienne!

Other than staying with family and friends wherever possible, we have camped and stayed in motels and hostels. Not a single hotel.

The most expensive night we’ve had was $US85 for a motel in Steamboat Springs, Colorado. The cheapest we’ve had was a $US6 campsite. Speaking of campsites, we camped 50 nights out of 103 during the first leg of our USA road trip. Fifty. With the average campsite costing $25. That is insanely cheap.

We probably spent about $US100 on camping equipment like a stove, air mattress, chairs etc from Walmart. Our tent and esky/cooler were borrowed. Commercial campsites in America are very easy to come by on the west coast and have excellent facilities such as wifi, showers, laundry and sometimes even pools. Campsites in the National Parks often only have toilets, but are fine. We also camped in the backyard of a hostel to save money. It can be done!

In South America we’ve mostly stayed in dorm rooms at hostels, which are really cheap. Occasionally we splurge on a private room to get away from other people. 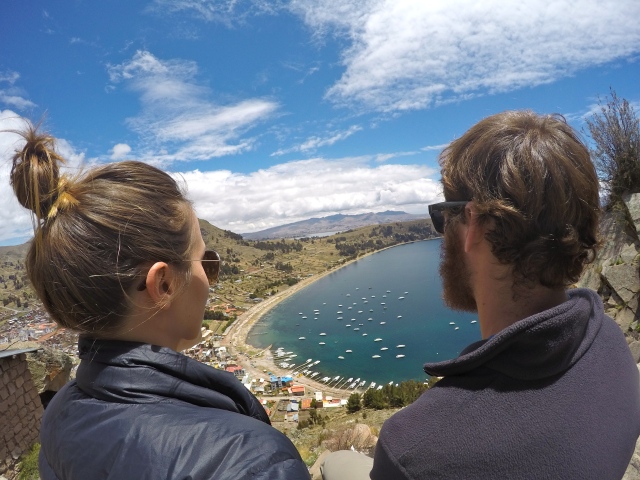 Really the only major thing we forked out money for in the US was our rafting trip in Stanley, Idaho, which was a big budget blowout at $US200. But that was also when we had a $US6 campsite.

Our other sources of entertainment include walking around cities checking out the parks and architecture, seeing the odd movie, sitting in a cafe for far too long people watching, reading by lakes and beaches.

In South America we’ve done many ‘pay what you want’ walking tours and spent a lot of time on beaches, next to lakes and doing other free stuff. We’ve also done some paid tours such as the Salt Flats and Bolivian Amazon tours, but these have worked out to be less than $100 per day with meals and everything included. Our biggest expense was the Inca Trail trek, which we paid for before we left. The camper van trip across Chile wasn’t very cheap but it was our transport and accommodation for two weeks. Plus we cooked all our own meals over this time. 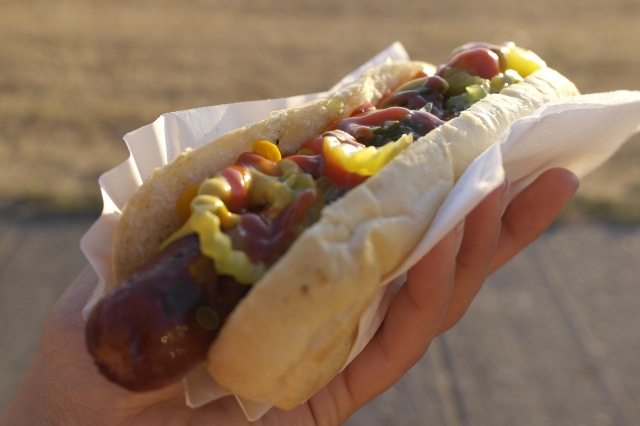 Food is such an important part of travelling to me, it’s the way I like to experience different cultures and I could never spend 8 months living on baked beans just to save money. That said, we’ve had far more homemade meals than bought ones.

Breakfast most mornings in the US was a bowl of oats, half a banana, some almonds and milk. Lunch was a roll with cheese, ham & tomato (or pastrami and sauerkraut when I finally cracked and couldn’t take cheese and ham anymore). Dinner is often a tofu sausage (those things are packed with protein, make you really full and are less gross than cheap meat sausages) and salad or vegetables. We’ve also made spaghetti bolognese, stir fries and chilli.  Sriracha goes on everything. Snacks are mostly fruit and muesli bars.

We often find a $US40 grocery shop lasts four days. That’s $US10 per day or $5US each for food. Yes it is a complete pain in the arse to maintain the esky/cooler, to keep buying ice and emptying the water and more than a few things have died in there. But the savings are well worth it.

When we do decide to splash out we take advantage of happy hour prices for food and drinks, we buy delicious food from food trucks and we use Yelp to find cheap restaurants.

Cook your own food at the hostel! Or seek out cheap street food and market food, in La Paz we managed to eat for $5 a day. In Peru we had two course market lunches for $2.50. Even in the more expensive South American countries (Chile and Argentina), the supermarkets and street food is pretty damn cheap. Get used to eating empanadas everywhere! 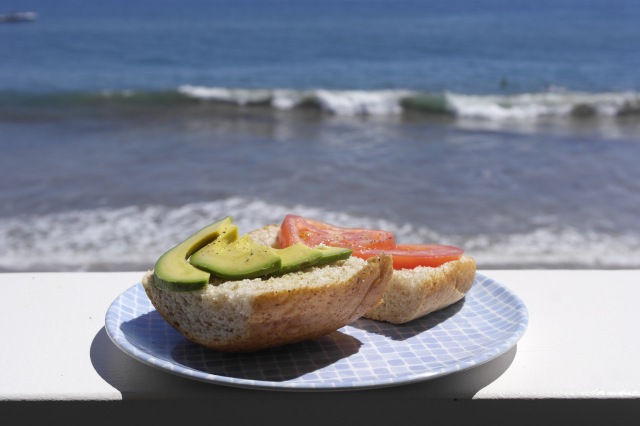 Say in the US we filled up the car for $US40, camped for the night $US25, made our own meals $US10 and grabbed a treat like coffees or frozen yoghurts for $US15. That’s a total of $US85 (or 120 Australian dollars at the current exchange rate) for both of us and on a petrol day.

When you travel like this it’s actually cheaper than being at home paying rent, electricity/water/gas/phone bills, car repayments, insurance etc. Andrew has calculated that in a week living in Kalgoorlie he would spend over $300 a week on living costs, not including drinking (the pastime of choice in Kal) or eating out.

We have definitely splurged while we’ve been away. Tickets to see Taylor Swift (my birthday present, thanks Andrew!), the Argentine Experience, the camper-vanning in Chile, most of our meals in New Orleans etc. It’s fine to occasionally splash out and if you’ve been really tight with your money its affordable.

Save as much money as you can before you go, stay in hostel dorm rooms/camp where possible, make your own meals as much as you can. The boring truth.

Some people aim to work while they’re away or volunteer but we haven’t done that yet. I have just started some freelance blogging though.

Happy travels! Are you planning a trip?

This entry was posted in Travel and tagged How to afford travel, Money, Travel. Bookmark the permalink.