Hiking the Inca Trail: days 1 and 2

Well, we did it! We hiked the 45km from Chillca along the Inca Trail to Machu Picchu. You may recall I was pretty anxious ahead of the hike and it turns out my anxiety wasn’t entirely unfounded, it was tough. The trail peaks at 4,215 metres above sea level (13,776ft) at a place charmingly known as ‘Dead Woman’s Pass’. There are steep inclines and declines, stone steps and rocky paths. It is freezing one minute and stiflingly hot the next.

But we packed our bags with everything we thought we could possibly need and waited nervously for a bus to pick us up on Friday morning.

We stopped for breakfast before heading to the drop off zone, a short way before the official trail starts. It was kind of chaotic as we plus many other hikers and groups assembled ourselves and our packs, fending off women selling everything from bandanas to hiking pole accessories.

Our fearless leader and guide Saul from Peru Treks gave us instructions and we walked towards the official starting point. 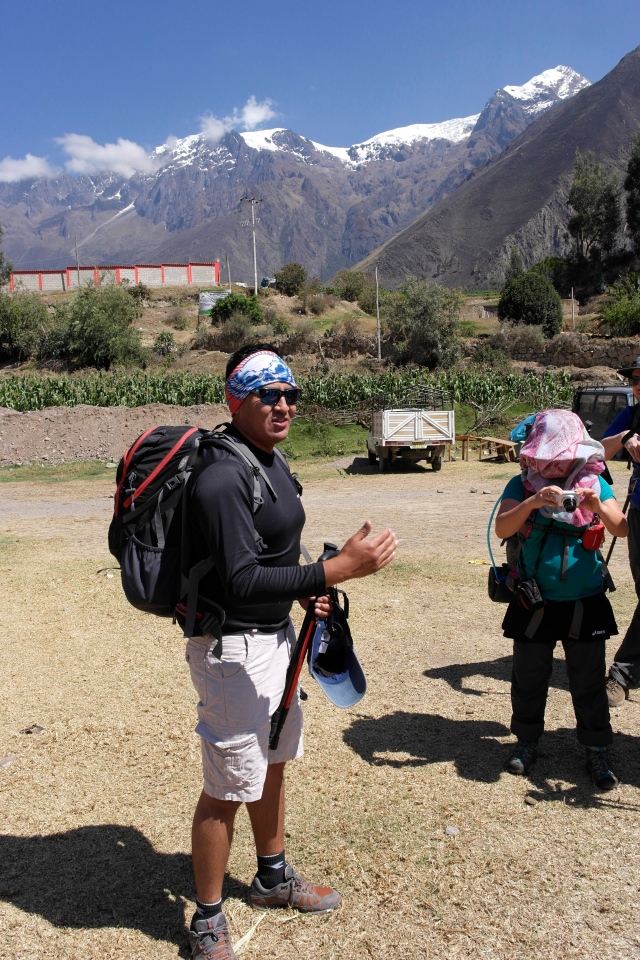 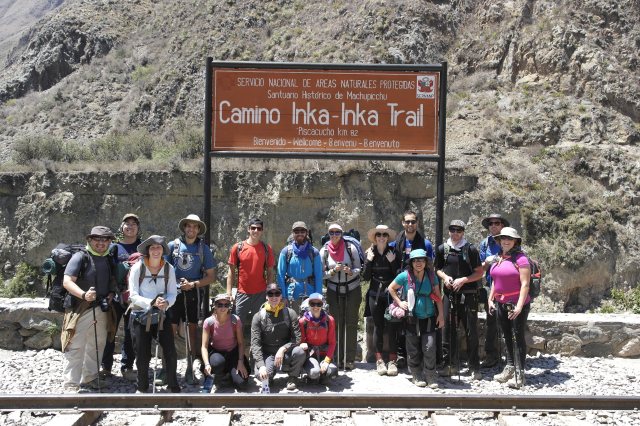 We really could not have been in a better group of people. I was nervous we’d end up with a bunch of jerks and know-it-alls but everyone in our gang of Americans, Canadians and Australians was lovely.

And so it began.

The scenery on the first day was grossly different to what I had imagined. It was quite dry and hot. Snow capped mountains sat regally in the distance, but close to us were cactuses and dusty paths. 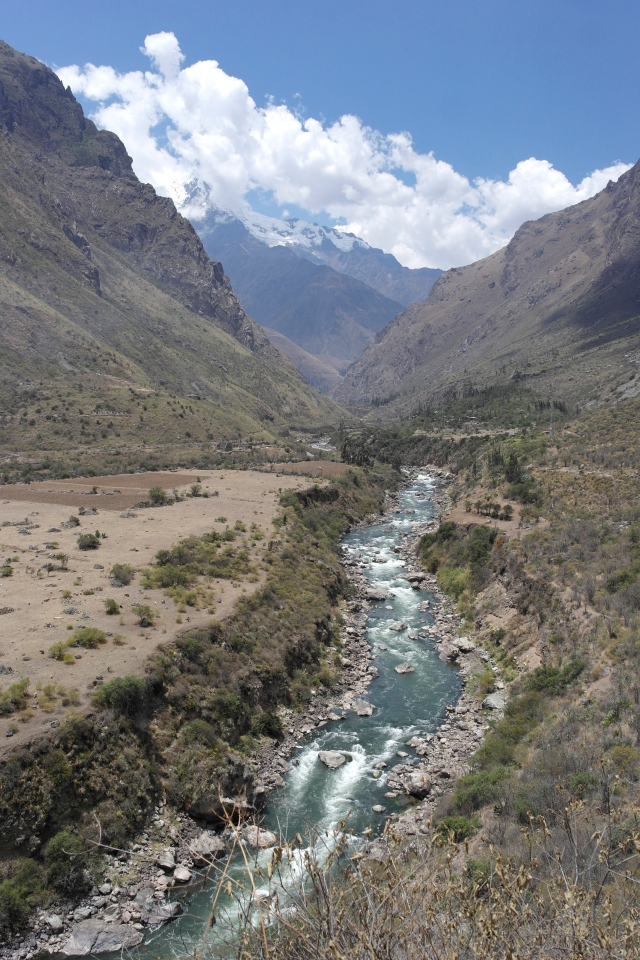 The trail was busy with horses and donkeys and it wasn’t long before we encountered our first equine traffic jam.

Our first day was a 16km day. We made the very naive mistake of not hiring a porter to carry some of our stuff and having never really hiked with more than water and a camera, this was challenging.

About half way in we caught sight of our first Inca ruins, Llactapata: 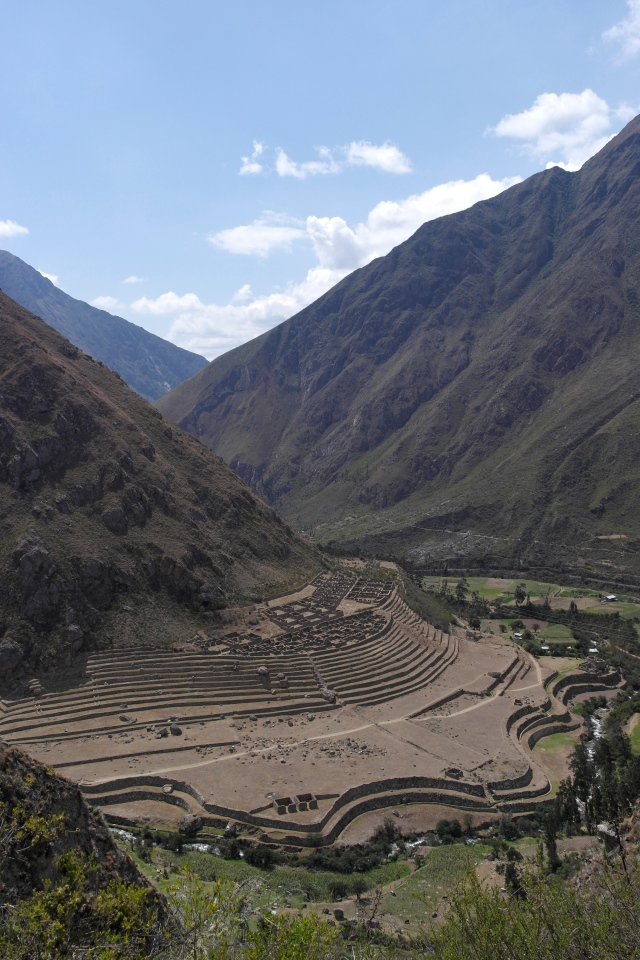 Those Incas knew how to build them strong. 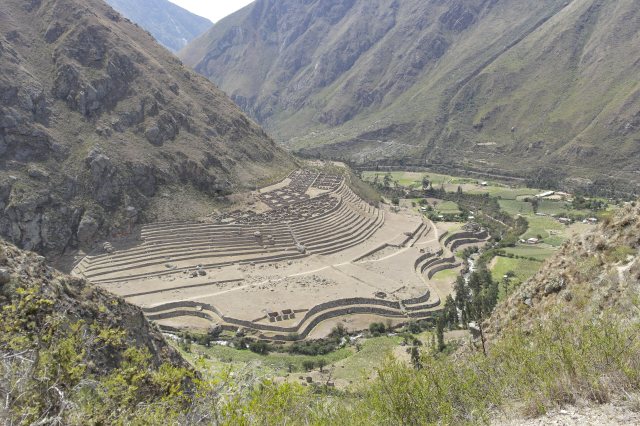 Shortly after Llactapata we stopped for lunch. The porters, whose strength and agility is nothing short of magic, had of course beaten us there and set up our dining tent.

These guys carry all our food, cutlery, dishes, mugs, cups, tables, chairs, tents plus much more in huge 20kg packs. Then they practically run past you without breaking a sweat. Seeing them work was definitely a highlight of the entire trip.

How do I begin to describe the food? Each meal we sat down to had multiple courses, each of them more delicious than the last.

Lunch on the first day comprised: 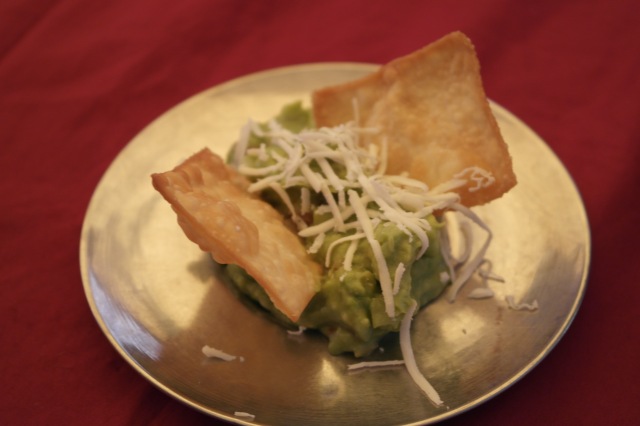 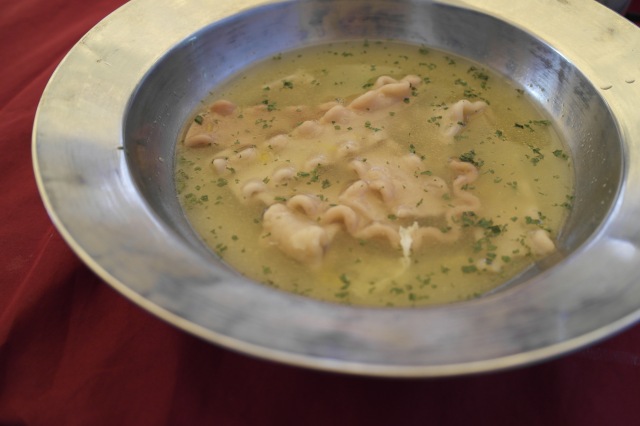 The most garlicy garlic bread I’ve ever had

I learnt the hard way that stuffing yourself before resuming hiking is a really bad idea. I felt full and sleepy and the rest of the day was far tougher than the first half. It was a slow and steady incline for most of the way, which I find more difficult and annoying to hike than a steep incline. 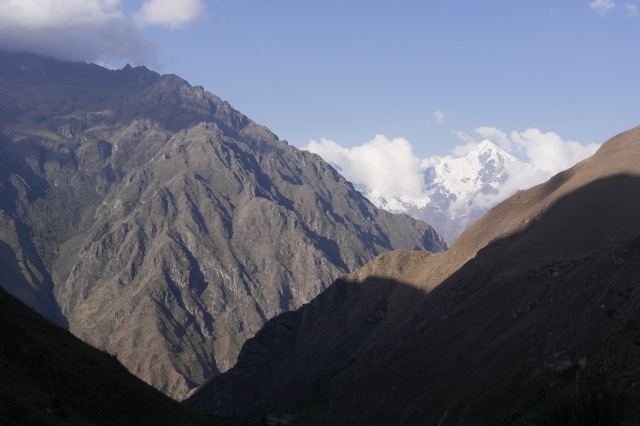 Wayllambamba, the last community on the Inca Trail, was where we camped for the night. We arrived tired and completely drenched in sweat. I had an unsatisfying wet wipe ‘shower’ and rugged up in my thermals. My mood lifted over dinner as we got to know our fellow hikers.

We went to ‘bed’ on very thin mattresses not worth their weight and I struggled to sleep with the loud snores coming from a nearby tent.

Honestly, my first thought when I woke and realised where I was and what I had to do that day was “oh shit”. Day 2 is the famed ‘hardest day’ that takes you up steep inclines to the highest point of the trail, Dead Woman’s Pass. It is also the shortest day, being 12km.

But Day 2 wouldn’t be so bad, because this time we had an ‘unofficial porter’ carry Andrew’s large backpack. This meant that Andrew carried my smaller backpack with only the things we would need for the hike and I carried nothing at all (bliss).

‘Unofficial porters’ are meant to be independent guys working along the trail that take up to 10kg for about $44 a day. But we didn’t see anyone and I have a terrible feeling that one of our group porters took the bag for a bit of extra cash. I have absolutely no proof of this however. There are very strict weight restrictions on how much a porter can carry and good treatment of porters is taken very seriously by the trekking companies. 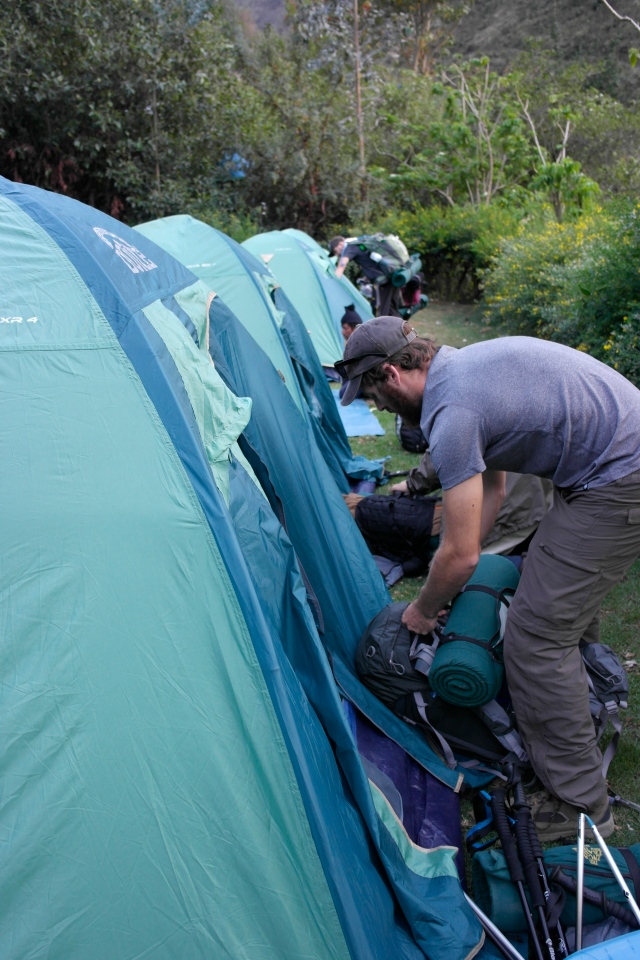 Speaking of porters, on the morning of Day 2 each porter introduced themselves to us and we reciprocated, which was really nice and helped make us all feel like a team. Team Yellow. Our oldest porter was 60, amazing.

We headed onwards and upwards.

With nothing on my back and tunes in my ears, I got into a really good zone, putting one foot in front of the other.

The guides and porters swear by chewing coca leaves (which come from the same plant as cocaine) to help with altitude and keep energy levels up. I wasn’t a fan of sticking dry leaves in my mouth, so had to spit them out before they could do anything for me. 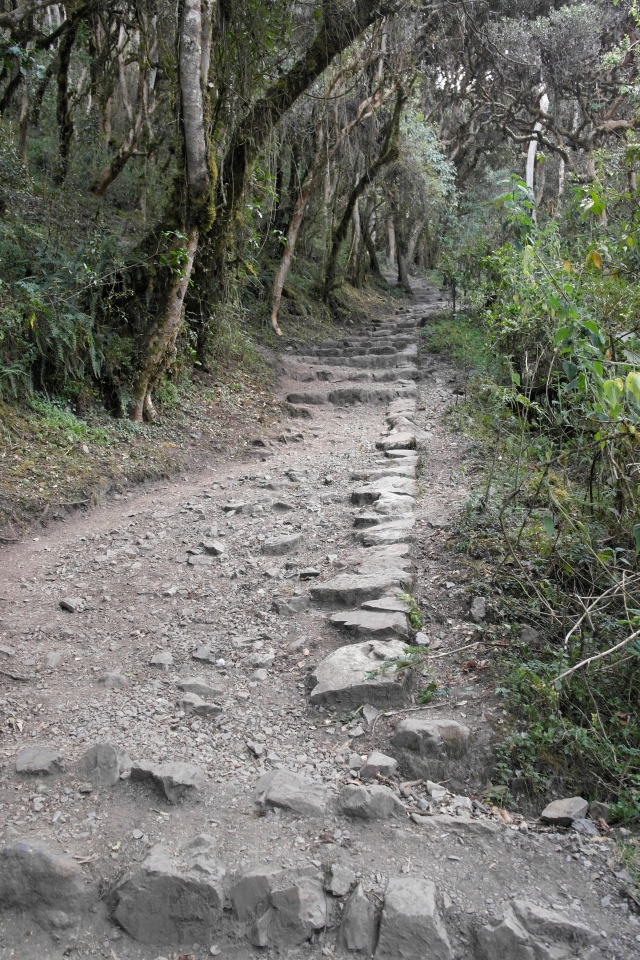 This does not show how steep it was

Llama! Or Alpaca? Not sure

Before too long it was time to stop for lunch. Our lunch spot was really windy and cold, but the view was great.

It was a relief to get inside the dining tent and away from the wind. 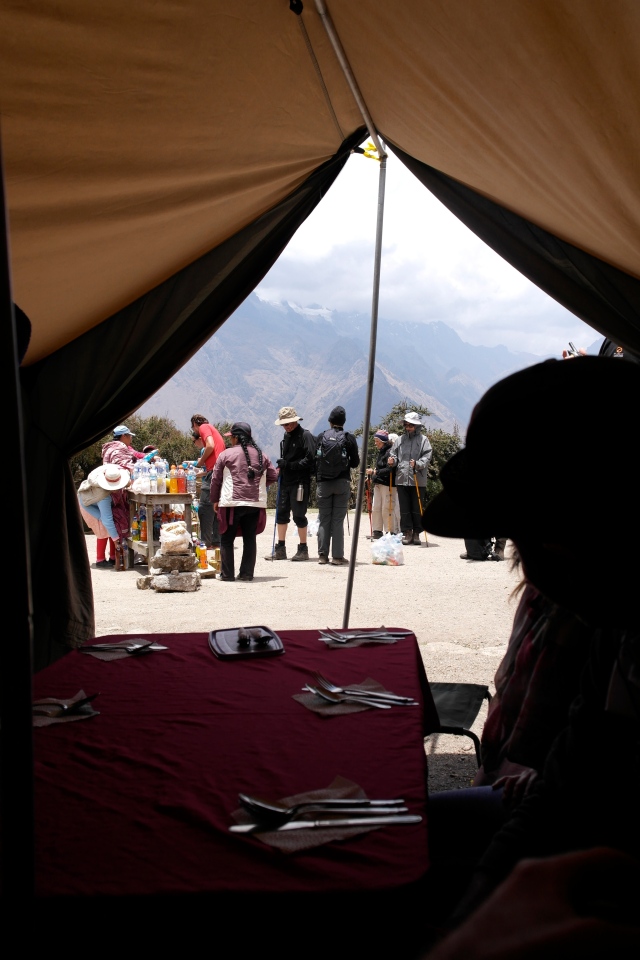 I didn’t photograph each course this time.

But it was still delicious.

We stocked up on super expensive bottled water (worse than Australian prices) and continued on our way.

We had our sights set on the peak and the only way was up. 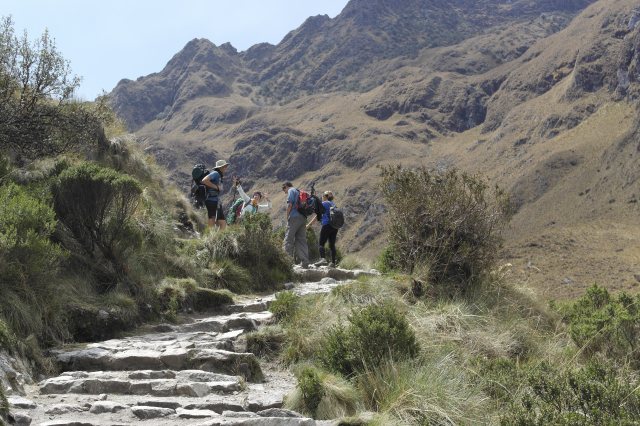 Llamas from very far away

We made it to the top, to Dead Woman’s Pass at 4,215 metres above sea level (13,776ft) without too much trouble at all. I had read blog posts that told accounts of vomiting every couple of steps from the altitude at this point, so compared to that we were just fine!

All smiles at the top 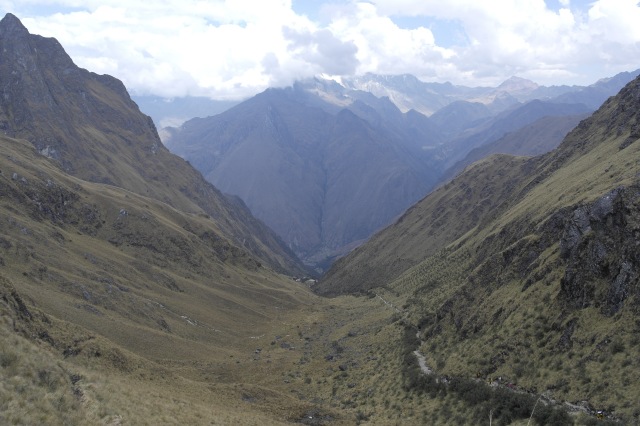 Can you see the tiny people on the trail?

Of course after reaching the peak the only way to go is down again, which is great for the lungs, not so great for my particularly average knees.

But it wasn’t actually that bad at all and we made pretty good time.

We arrived at our campsite a bit earlier than the previous day and were served tea, popcorn and biscuits at about 5pm ahead of dinner at 6:30pm. Obviously.

What was meant to be the worst day turned out to be my best. More to come.

9 Responses to Hiking the Inca Trail: days 1 and 2