In between leaving Kalgoorlie and leaving for this amazing trip I spent three weeks at home in Melbourne catching up with family and friends. During that small three week window, a terrifying video did the rounds on tv and online news about a Melbourne man who fell off the side of Bolivia’s death road, survived and captured it all on his GoPro.

I think I was sitting on my mum’s couch with a cup of tea, probably a biscuit too, when they played the footage on the news. “I hope you’re not planning on doing that!” Mum said quickly. “Ummm I don’t know…” was my answer. “Well if you are doing it don’t tell me until afterwards!” she replied. Fair enough.

At that point I really had no idea if we would be cycling down Bolivia’s most notorious road, it seemed so far away and I was only thinking about the American leg of our trip at the time.

Fast forward 5 months and Andrew and I are in La Paz, Bolivia, and booked in to cycle down Death Road. The night before I start to massively freak out, imagining skidding on the gravel and tumbling over the edge down one of the 600m drops. I was really regretting having booked the ride but didn’t want to back out due to cost.

Some facts about Death Road:

I think part of my anxiety was due to feeling extremely out of my comfort zone and really not enjoying the Inca Trail in Peru. Also there is definitely a risk of falling off one’s bike and falling off the side, which greatly increases one’s risk of death (what a surprise!).

Having hardly slept we were picked up early from our hostel by a company called Ride On and were driven out of La Paz to the starting point. We were given shin and knee guards, arm and elbow pads, gloves and motorcycle helmets which was pleasing.

The first leg of the ride is along a sealed, modern road. We were effectively riding in a cloud, so it was absolutely freezing and in minutes we were drenched. But so much fun! Because the road is so smooth you can fly down, dodging the odd car or truck.

We then arrived at the old, notorious part of the road. Please excuse these terrible photos, Ride On were meant to email us all the photos that were taken as part of the tour but never did (classic Bolivia!) so all I have are GoPro screen shots. 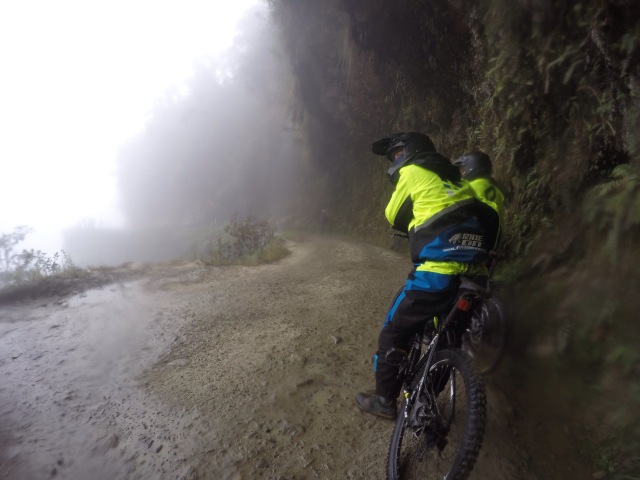 This exactly where the Melbourne man fell off

It was not scary at all. This is largely because the fog prevented us from seeing over the cliff edges. But the danger was always present, especially as we stopped every 20 minutes or so and our guides would point out  the roadside memorials. A bus of 90 people once went over the edge, some who survived the initial fall died because they weren’t reached by paramedics in time. Horrible. 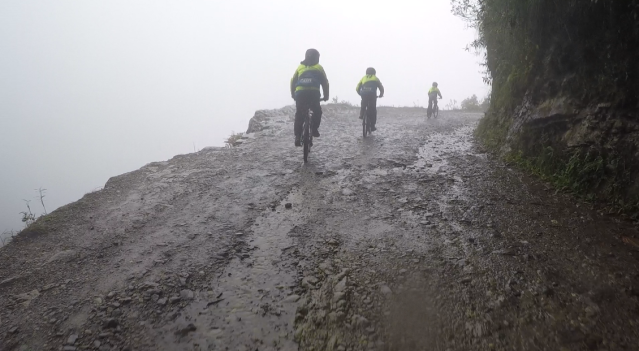 A casual 600m cliff to the side here.

It was so much fun, such a pleasant surprise! I got really into it and was the fastest female in our group. I was third to arrive at the rest stops most of the time. Andrew, who used to cycle competitively, left us all in his dust though.

Here is a minute of my very average GoPo footage:

I honestly didn’t realise at the time that I was getting so close to the edge! Otherwise I would have freaked out. Especially at 0:23, 0:34 and 0:41. 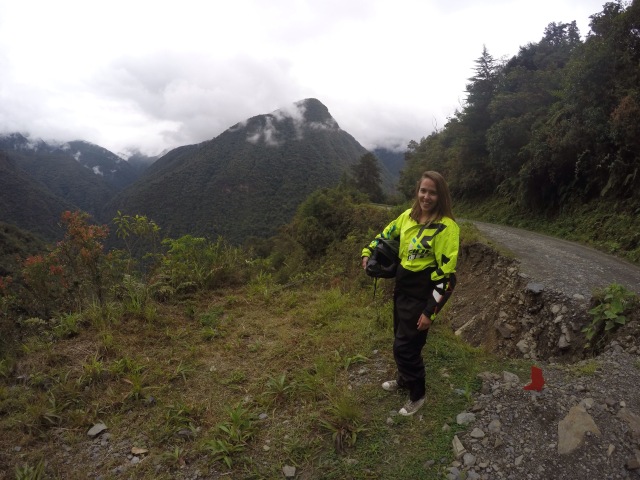 The 3 hour ride was over in the blink of an eye. By the end my arms felt like jelly from gripping the handlebars tightly as I went over endless rocks. We stuffed ourselves at the buffet lunch and I was so pleased to have completed the ride. I definitely felt a sense of accomplishment I didn’t feel after the Inca Trail.

Feel the fear and do it anyway. Just don’t tell your mum beforehand!