Hiking the inca trail: days 3 and 4

This was what I saw when I unzipped our tent on day 3 of the Inca Trail: 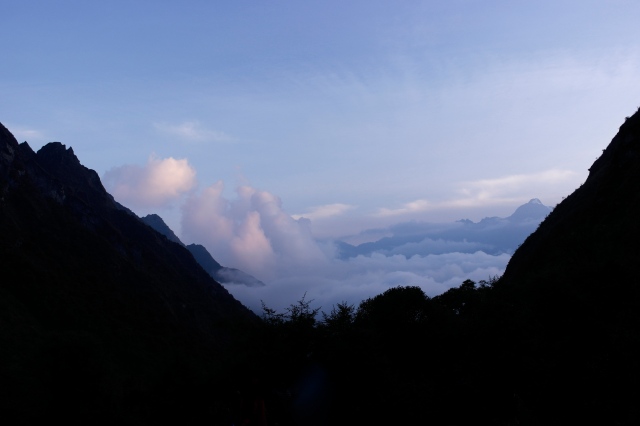 Sleeping in the clouds

Day 3 is a 16km day. After breakfast it was all uphill for the first part of the day. After about 20 minutes we were looking down at where we had camped the night before: 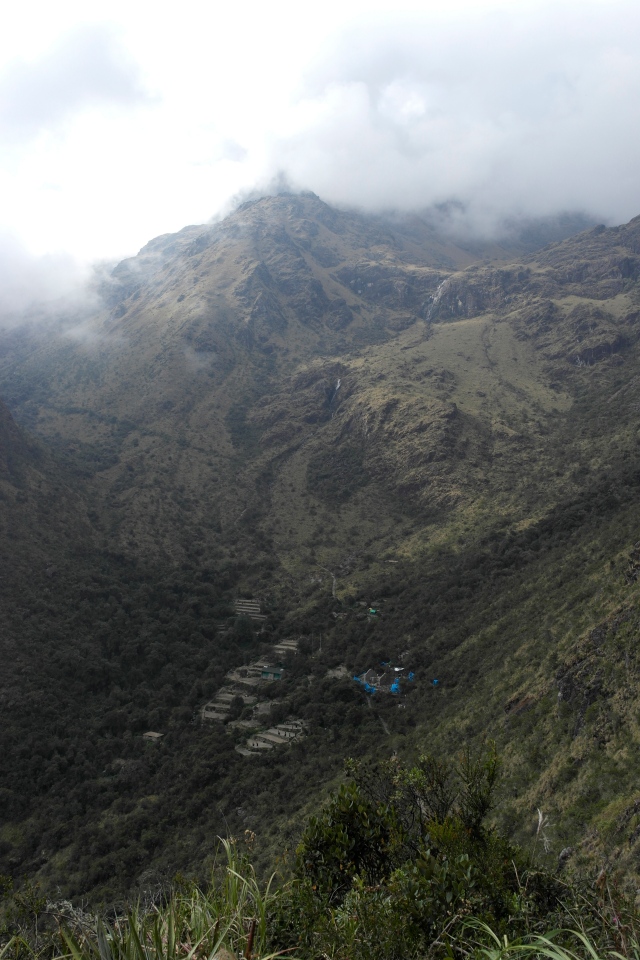 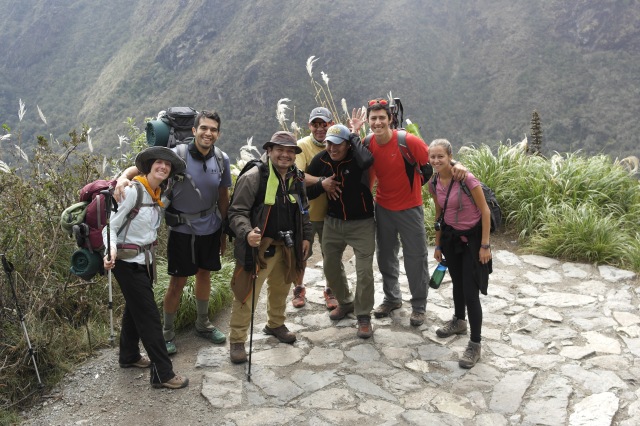 Some of the gang

The clouds swirled around as we ascended, constantly changing the view. 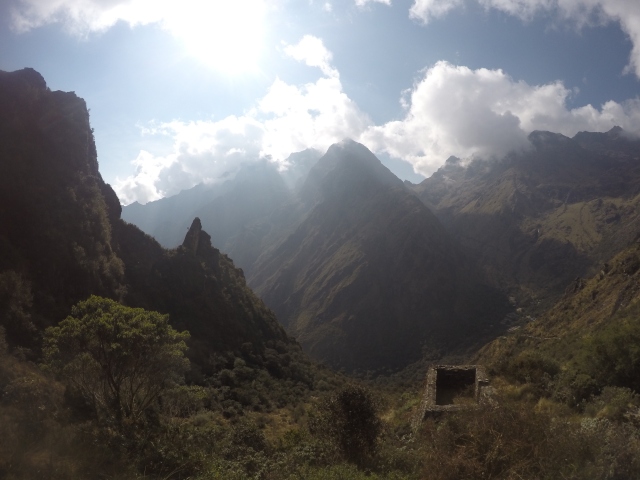 We reached the top of the second pass (the first pass being Dead Woman’s Pass on day 2) and took part in a traditional offering with coca leaves and stones we had carried from the stream we camped near.

I wished for a painless day and for good weather upon arriving at Machu Picchu. The gods must have known I don’t have a spiritual bone in my body, as neither wish was granted!

We descended down the other side of the mountain towards Sayacmarca. 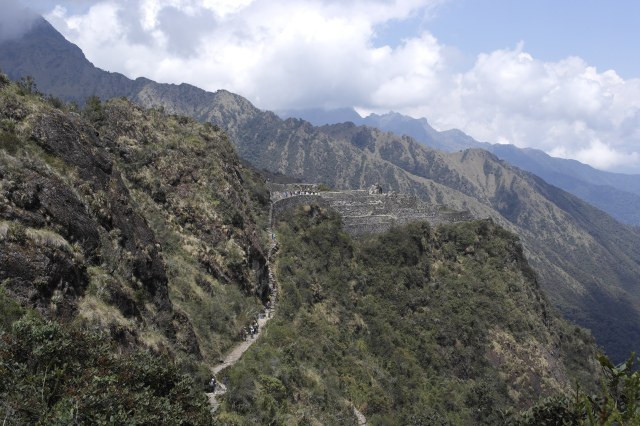 Sayacmarca ruins in the distance 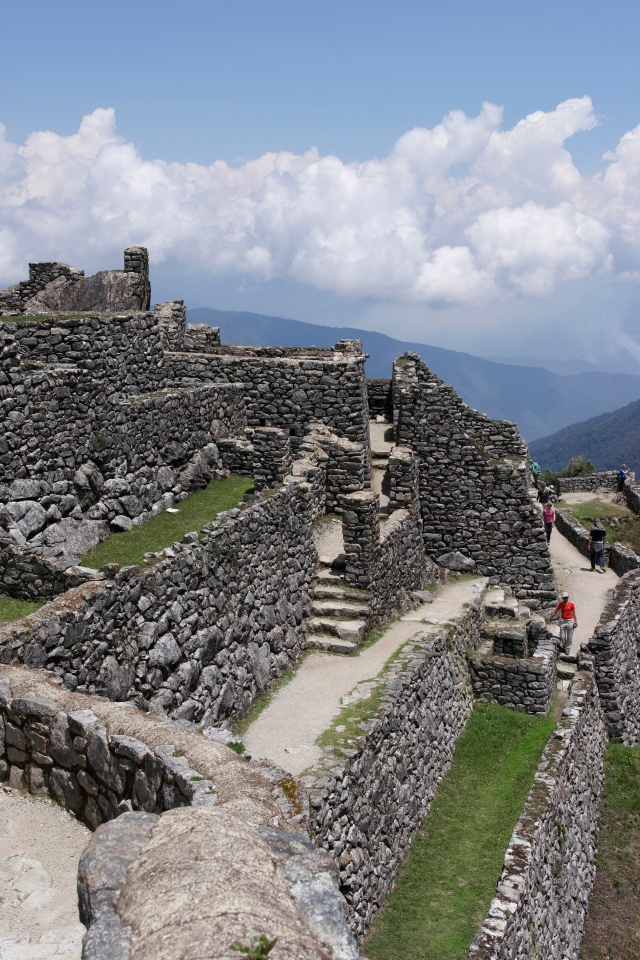 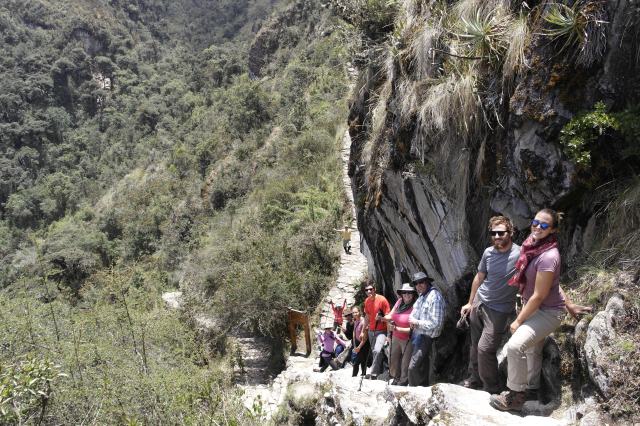 About 20 minutes later it was time for lunch. We had a semolina/tomato starter: 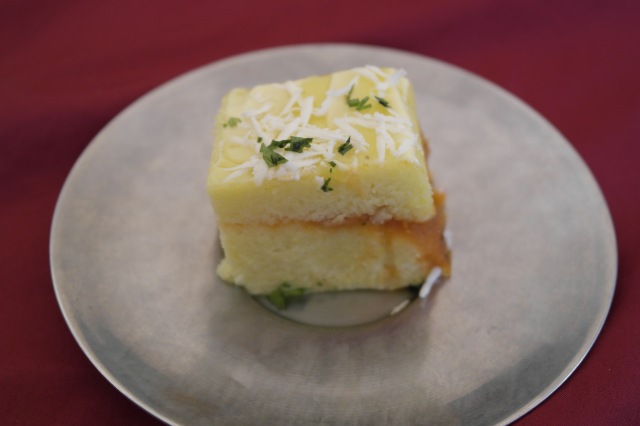 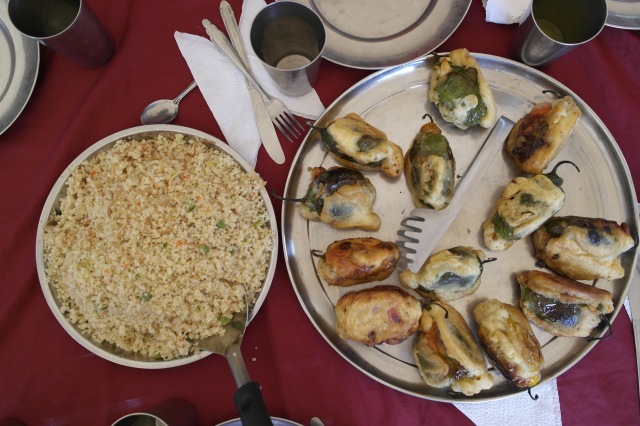 And chicken and vegetables.

A member of our group was celebrating her birthday that day and magically after lunch, this appeared:

I have no idea how they managed to bake a cake or keep cream cold for so long. Such is the magic of the porters. 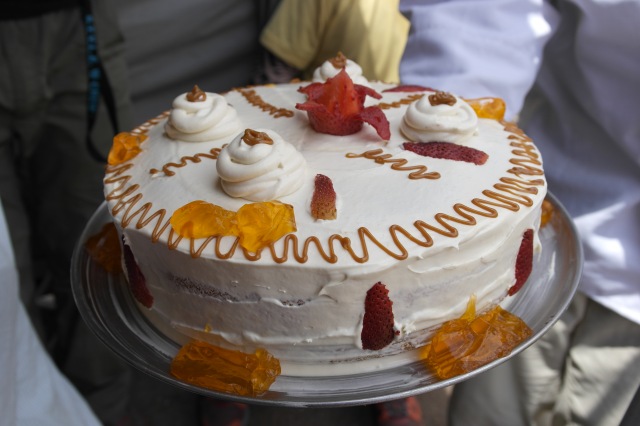 After lunch we watched some frisky llamas gadding about.

This one tried to mount the other

The walk after lunch was lovely and flat, passing through rainforest-esque scenery.

From the third pass we caught a glimpse of Aguas Caliente, the closest town to Machu Picchu:

Tiny town in the valley

From the third pass things begain to go downhill, literally and figuratively. 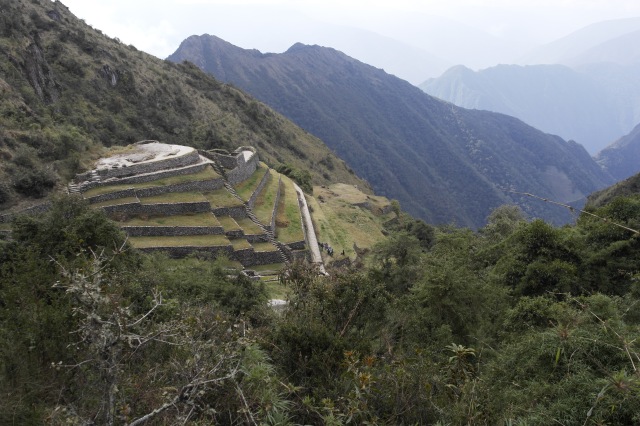 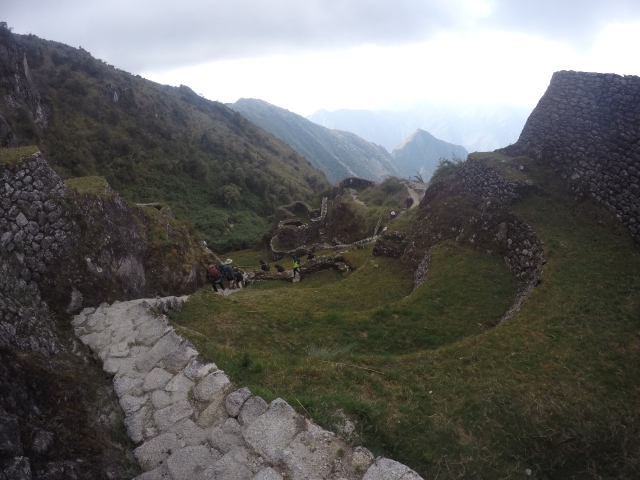 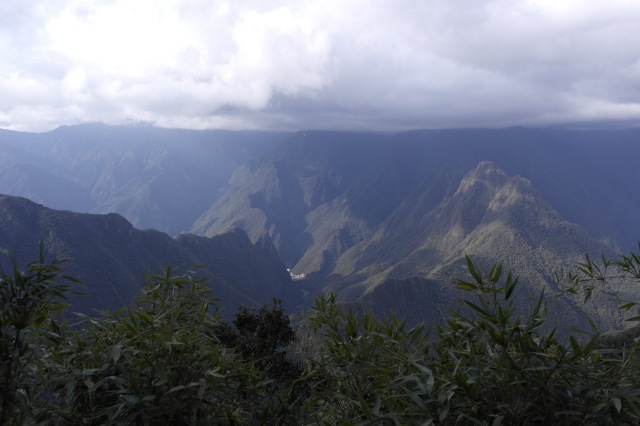 I found the descent brutal. Far worse than going uphill. My crappy knees complained with every laboured step down. No amount of music, internal pep talks or self motivation could cheer me up:

It took us a very long time to reach camp. At one point I had stopped to sob for a while, trying to find the motivation to keep going. When we reached our tent and I immediately curled up in the foetal position.

I felt a bit better at dinner.

There’s nothing like waking at 3:30am to make one feel better. #sarcasm

I have no photos of the final few kilometres because honestly, I didn’t need any reminders. It was raining, I was sore and couldn’t wait for it to be over.

The Sun Gate is the final stop before you reach the end. There is meant to be a view of Machu Picchu but all we could see were clouds.

Visibility became a bit better as we got lower: 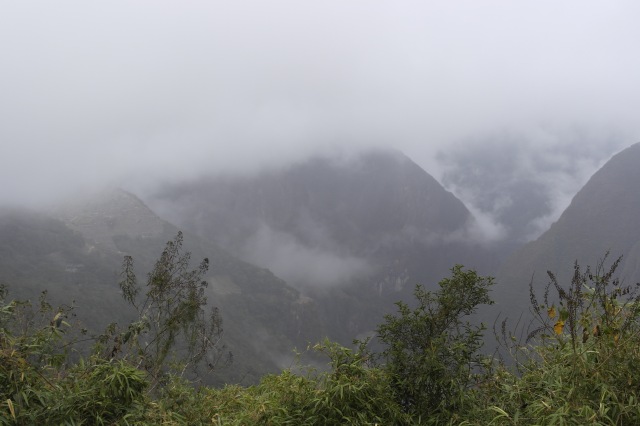 We got to Machu Picchu and were surrounded by clean, showered day trippers. I was envious. And completely out of it. Dazed.

We posed for a group picture: 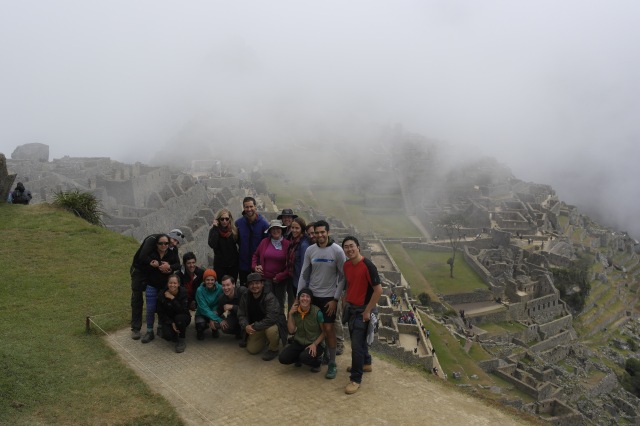 I took a GoPro selfie: 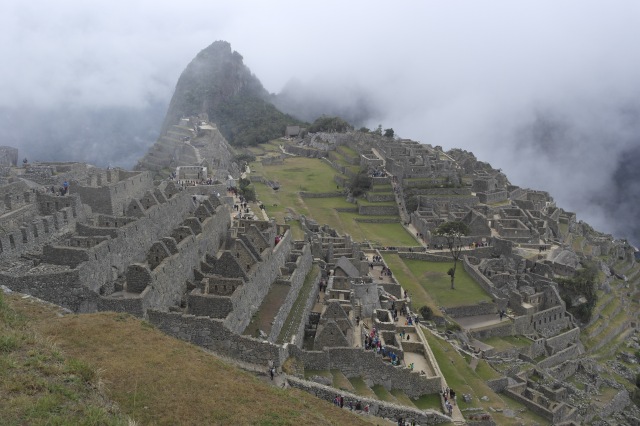 I don’t think I really appreciated the ruins until we’d checked our bags and had something to eat. We then took a tour around the massive complex. 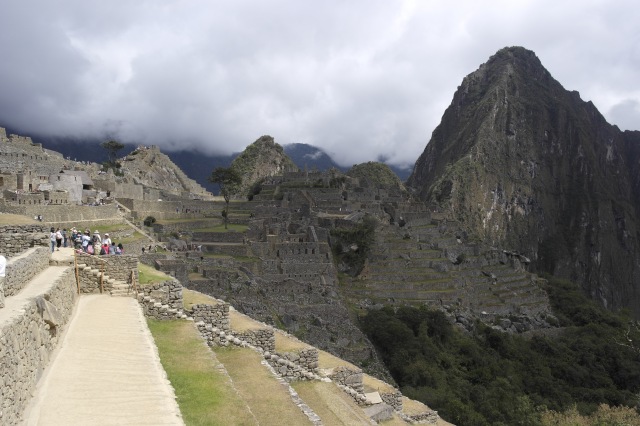 "Hey, remember that time we hiked 45km over four days at ridiculous altitude instead of taking a train to Machu Picchu? I do." #incatrail #machupicchu #legshurt #Peru #hikingcareerover

Towards the end of our tour, David from our group proposed to his girlfriend, Becky. It was the sweetest thing ever and a really nice way to finish up. 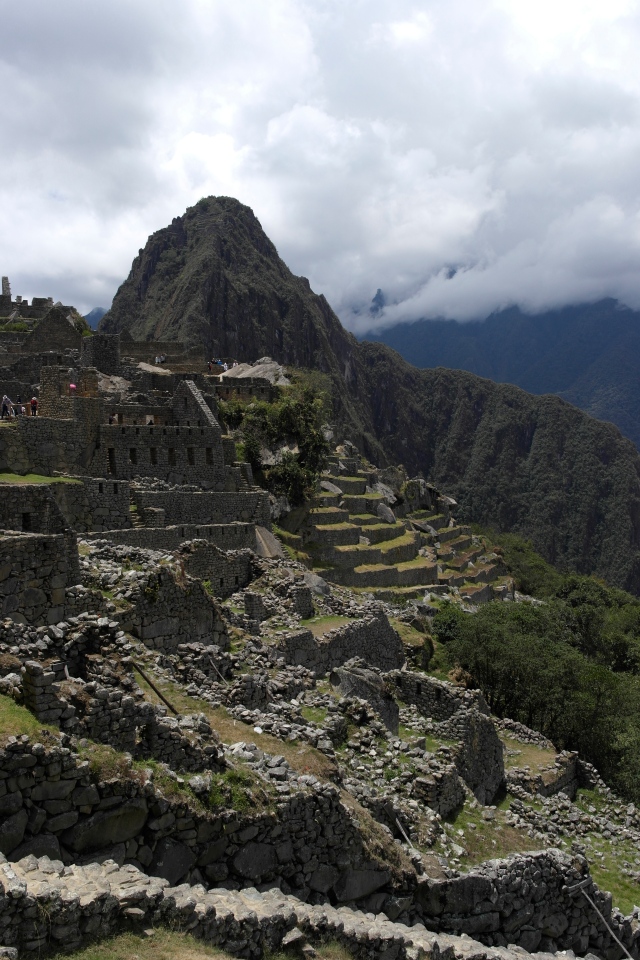 We got the bus down to Aguas Caliente and enjoyed one final meal together as a group before swapping Facebook details and hugging goodbye. What an epic experience to tie us all together.

Andrew and I had decided to spend a night in Aguas Caliente in order to get some rest and visit Machu Picchu again the following day. So we checked into our hostel, took showers and fell asleep without dinner.

The trek was an amazing experience, with soaring highs and crushing lows. I’m glad I did it. But I certainly won’t be signing up for any more multi day treks. More on Machu Picchu to come.

5 Responses to Hiking the inca trail: days 3 and 4