Getting mugged in Taganga, Colombia

Well friends, here’s post I never wanted to write. Last night, against my better judgement, I decided to walk home alone from a bar back to our hostel in the small seaside town of Taganga, Colombia. Andrew hadn’t been feeling well and had gone to bed early and other friends had been at a different party.

During the walk, a man ran up behind me and attempted to grab my bag. I was so surprised I initially thought it must have been a joke. But quickly I realised that thing that never happens to you was happening to me. I was being mugged.

Despite knowing the best response is to surrender your bag instead of fighting, instinct kicked in. So I clamped down on my bag while he pulled strongly on the strap and I just screamed “No, no, no, no, no” over and over. I don’t really remember it clearly but I ended up on the ground, being dragged along while he kicked at me trying to get me to let go. We must have fought for quite some distance, judging from where I found my shoes.

Eventually he won the handbag tug of war and ran off, scaling a wall and disappearing. I jumped up and chased him, almost managing to grab his ankle (what a stupid thing to do!) before he disappeared.

Shoeless, dress torn and completely covered in scratches, cuts and grazes I stood there dazed for a second and then a bartender I know happened to walk past. When she saw me she became hysterical and took me to another hostel, demanding to know why I was out alone and maniacally dousing my cuts in alcohol. After a while a security guard walked me home. I woke up Andrew and called my parents.

This morning I was woken by a friendly stranger, a guy called Lex who looked like an extra from a 50 Cent video, who decided to take me down to the police station to see what could be done. I have no idea why Lex decided to get involved or how he even heard what happened but he didn’t want money. He just kept saying that it was bad for the town and he was really mad at what had happened. Frankly, I was amazed that anyone cared or was surprised at what had happened. I guess my banged up arms and legs won me some sympathy.

Many trips to the police station, including a government office in a neighbouring city have yielded nothing. They did make me look at a bunch of very amateur mug shots to try to identify the mugger, which felt strange. But at least I have a police report to lodge my insurance claim.

I lost my iPhone, my beloved GoPro camera and a tiny bit of cash. Thankfully I didn’t have any bank cards or my passport on me. Thank goodness for cloud technology, I am able to access all my iPhone photos through iCloud and only lost a few GoPro photos.

I’m very grateful that despite fighting like a complete fool, I wasn’t badly hurt. I can replace my phone and GoPro, but not myself. I do have one very swollen and purple finger though and my skin is going to look a bit rough for a while, luckily I didn’t get cuts on my face. 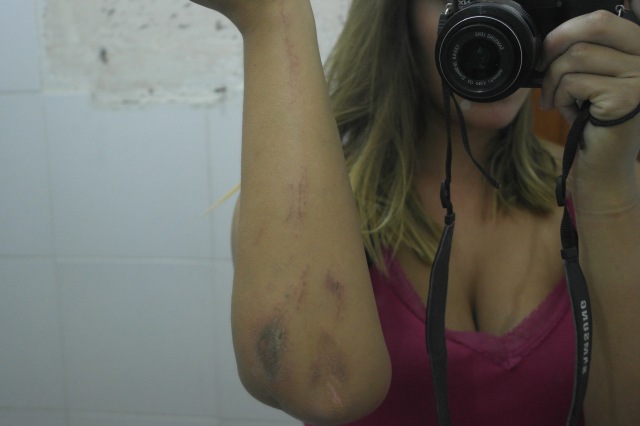 You should see my legs

I wish I could fast forward a few days until I feel better, emotionally and physically. I’m trying to tell myself that these things happen all the time, that’s why insurance exists. I accept that what happened is mostly because of my own damn foolishness, so I’ve learnt a big lesson.

I still don’t believe that Colombia or anywhere in South America is inherently dangerous (bar Venezuela and guerilla territory). You just have to be careful and not take stupid risks. Like I did.

35 Responses to Getting mugged in Taganga, Colombia