Visiting the Mormon capital of the world: some thoughts 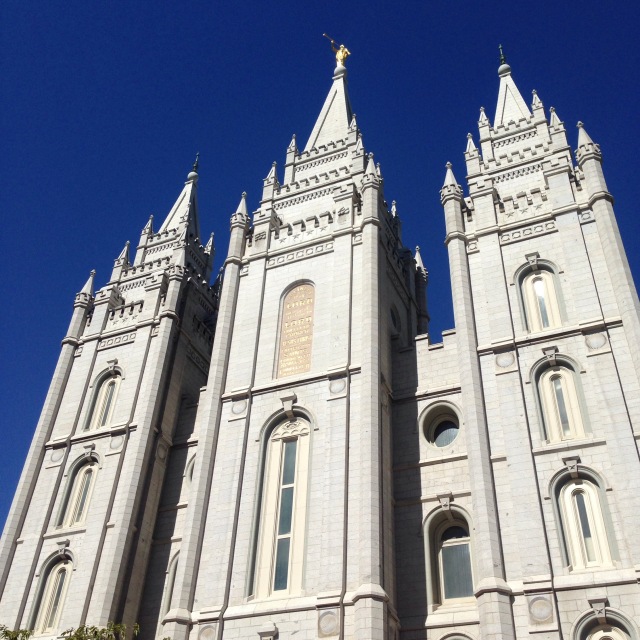 I’m kind of breaking the chronology of our trip with this post. Technically Idaho comes next but we are in Salt Lake City now and I wanted to write this while it was still fresh.

Salt Lake City is beautiful, framed by mountains and on the edge of a body of water so vast it looks like the ocean. The CBD actually reminds me a lot of Melbourne with its tree lined streets, trams and generally clean, affluent appearance.

Today we explored Temple Square, the six acre global HQ for The Church of Jesus Christ of Latter-day Saints. The square is made up of many impressive buildings including the conference centre which holds 21,000 for twice yearly meetings, the tabernacle (the building used before the conference was opened in 2000) and the imposing temple, which only card carrying Mormons can enter.

The Square is run by female volunteers known as ‘sisters’ (the men are known as Elders) who take tours and welcome visitors. Mormons complete missions for the church so many of the sisters are from overseas, completing their mission.

All of the sisters are lovely, with smiles permanently on their faces. I felt uncomfortable because I was wearing shorts and modesty is an important facet of Mormon faith, but only in the same way I would feel uncomfortable in shorts at a Buddhist temple (they don’t give out modesty sarongs here though!). All of the sisters wore skirts that fell below their knees, none of them in trousers. I can’t help but think how much easier life must have become for fashion conscious sisters when maxi and midi skirts made a comeback.

We took a tour of the conference centre with an older sister who was lovely. Mormonism is based on the time of Jesus Christ and his 12 apostles, so there is a leader of the Mormon church and he has 12 apostles. Our tour guide pointed out their portraits on the wall and they were all old and white. When I asked if women could be apostles she explained that there are women leaders who run the womens’ conference and who “give information on how to raise your kids and keep pornography out of the house” (direct quote).

We took a second tour of the Beehive House. Joseph Smith wrote the Book of Mormon in 1830 after having received visions (presumably from God and Jesus) that led him to buried scriptures which he translated. In 1847 (after a bunch of stuff happened including Joseph Smith being killed by an armed mob) it was Brigham Young who led the Mormon pioneers into what is now called Utah and founded Salt Lake City. Beehive House is where Brigham Young lived and conducted his business.

On the Beehive House tour we met an Australian couple who had been members of the Mormon church for 35 years before becoming disenchanted and leaving. They were in Salt Lake City as a kind of farewell to their faith but only because they happened to be travelling around the States. They were jaded, but cheerful and fascinating to speak with.

Both Jenny and Tom (not their names) had joined the LDS church at age 13. They said on a local level the church was lovely and the emphasis on family an excellent way of life. They were “shiny and happy” and raised four children under the Mormon faith. It wasn’t until the advent of the Internet that their faith started to come apart at the seams.

Mormonism has murky ties to polygamy but apparently it is believed that Joseph Smith did not practice polygamy. Jenny said when she did research and found out that Smith did in fact practice polygamy (he had 27 wives) and that some of his wives were women he married after sending their husbands away on missions things started to change. That some of Smith’s wives were apparently as young as 14, some were slaves and some lived destitute on the edge of town, was particularly damaging to their faith.

Visiting Salt Lake City, Jenny said, it is easy to see that the LDS church is big business. Mormons must tithe 10 per cent of their salary before tax to the church (to see how much Reuters thinks that adds up to each year click here). That money is seen in the immaculate Temple Square grounds, its impressive buildings and even in a $2 billion state of the art mall that takes up several city blocks, but not in donations to charity, Jenny said. Their towering administrative building is more akin to that of a major bank, not a church.

They were sick of the lies.

As a believer in equality, Jenny was also sick of the Mormon approach to homosexuality and not impressed that black people couldn’t be members of the church until 1967.

Breaking away from the church was difficult, they said. Particularly as two of their children still hold strong Mormon faith. Jenny and Tom won’t be able to attend their daughter’s wedding because they no longer tithe and won’t be admitted into the temple.

I won’t pass judgement, as I don’t think chatting to Jenny and Tom for 20 minutes qualifies me to do so. But today was an interesting and enlightening day. Maybe things have changed since they have left the church, but maybe not.

7 Responses to Visiting the Mormon capital of the world: some thoughts