Wedding chat: what would you do differently? 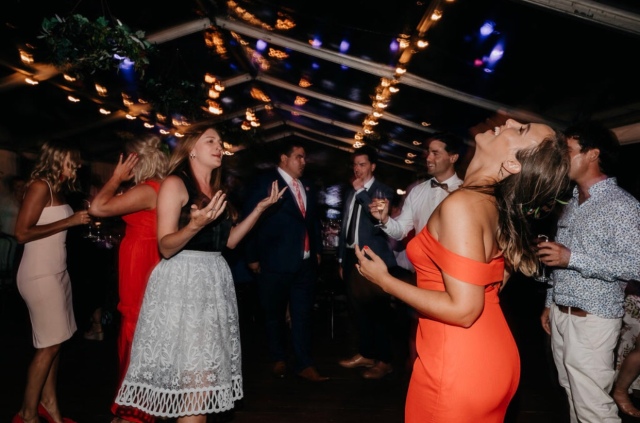 Loving the dance floor at my friend Bec’s wedding

Andy and I are in the process of planning our wedding. Exciting stuff! We are trying to prioritise what’s important to us (food, drinks, music, photos… oh and someone to do the legal bit) and not sweat any of the small stuff. So far this is working out well except for when I embarked on a bizarre hour-long search for table runners in which I almost justified $350 to hire some before snapping to my senses and backing away from my computer. I can think of about five million better things to spend $350 on.

There are so many blogs that have lists of things people would do differently if they had their wedding again (including picking a different person to marry!) and I’m sure the aforementioned table runners would fall into this category had I taken the plunge and hired them. A few months ago I took to my Instagram stories and asked people two questions:

Firstly, how much did your wedding cost? And, what would you do differently?

The feedback was immense. People love talking about weddings. As you would expect, the answers to the first question ranged wildly from about $1000 to $100,000 depending on how recently the wedding was.

Unsurprisingly, the answers to the second question were mostly experience-based in that people wish they’d spent more time with their guests or bridesmaids or partner, that they’d invited fewer people or even eloped. No one ever wishes they’d shelled out more clams on flowers or candles. Some people did say that for ease they wished they’d hired a venue that came with things like tables, chairs and cutlery included.

The overwhelming response though, was that people wished they’d hired a videographer to capture their nuptials. You get so caught up in everything happening on the day, they wrote, that they wished they’d had a video to watch it all back again. A close second was people wishing they’d hired a better photographer or not given the responsibility of taking photos to their aunt’s neighbour’s son, a keen amateur skateboarding photographer.

What do you think? Is there anything you would change if you had a wedding do-over?

This entry was posted in Social Commentary and tagged Wedding, Wedding Planning. Bookmark the permalink.

2 Responses to Wedding chat: what would you do differently?