10 things you should know before travelling to New Caledonia

Back in August Andy and I celebrated my 30th birthday with a week in New Caledonia followed by a week in New Zealand. We couldn’t decide on sand or snow so we decided to squeeze in both! I’ve been dying to share photos from our trip, better late than never hey?

To get to New Caledonia we flew Melbourne to Brisbane and then direct to Noumea, New Caledonia’s capital. We spent a night there before flying out to the Isle of Pines, one of New Cal’s many beautiful islands. Our first day was completely rained out, which turned out to be a blessing in disguise as I caught up on lots of sleep. Luckily the weather turned around big time:

After the Isle of Pines we flew to the lesser known island of Ouvea, which was one of the most beautiful places I’ve ever been. We had such a fantastic week- I really can’t recommend this island paradise enough. Here are 10 things you should know before going there.

1 English is not widely spoken outside Noumea

A long winded way of saying ‘no entry’? Who knows?!

Even on the Isle of Pines, a cruise ship destination and arguably the most touristy island of them all, English speakers weren’t hugely abundant. I should emphasise it is definitely our fault for not speaking French, not the other way around!

On the more obscure island of Ouvea it was painfully awkward trying to communicate in our pathetic grasp of ‘French’. One night at our guesthouse Andy spent an uncomfortable 10 minutes with a staff member and Google translate, trying to order dinner while I cringed nearby. We didn’t understand that we had to ‘book’ dinner in advance and almost went hungry until the staff took pity on us and cooked us up two plates of prawns- which Andy is allergic to. Whoops! The locals aren’t used to tourists that aren’t French and sometimes didn’t seem to understand why we couldn’t speak the language. We did get almost stranded once, but apart from that we managed to get by, even hitching a ride and negotiating a boat ride with a local fisherman.

2 Book in advance; you can’t wing it

You really need to book all your accommodation, including airport transfers, in advance. When we arrived on the Isle of Pines, the airport’s only three hire cars had been booked out and we had no way to get to our hotel on the other side of the island. Eventually we managed to pronounce the name of our hotel correctly enough to someone (see point 1 above!) for them to realise we needed a taxi. New Caledonia is the only place I’ve ever been where the airport doesn’t have taxis lined up waiting for jobs!

Having not learnt our lesson we landed in Ouvea and had no way to get to our guesthouse. Andy eventually enlisted the help of a woman from the airport’s check-in counter who spoke a couple of words of English and booked us a transfer. When we got to the guesthouse it was deserted… apparently the owners had flown to Noumea! Thankfully our lovely driver stayed with us and drove us somewhere else. 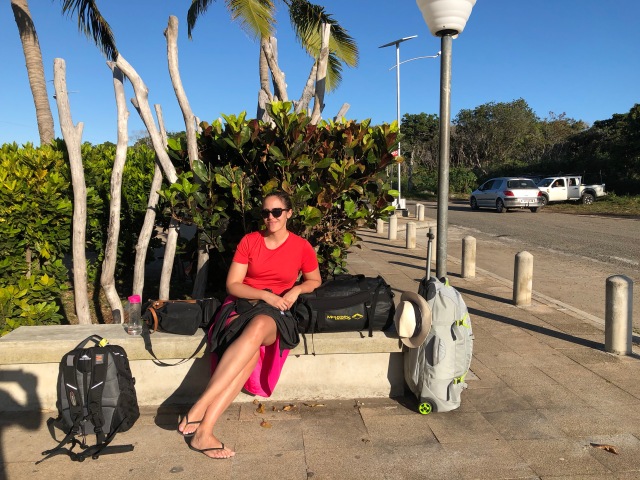 Finally managed to get some wheels to burn around the Isle of Pines!

3 Sea snakes are a thing

We only saw one sea snake! It was on the beach on the Isle of Pines and a dog was attempting to play with it, I was petrified for the dog. However we spoke to a lovely French mother and daughter duo who had been to Îlot Maître, popular as the only place in New Cal with overwater bungalows, which they said was absolutely crawling with sea snakes. Apparently you’d be lying on the beach with a snake directly to your left and right… gross.

New Caledonia is not a budget holiday destination. The prices are on par with Australia. I loved it because it’s really nice to go to a place and not feel the uncomfortable wealth gap between yourself and the locals. It’s also not crawling with tourists, we had the beach to ourselves most days.

Ouvea, never saw more than two other people on this beach!

The islands are the definition of pristine paradise. Because of the robust economy, there is decent infrastructure and the environment is not being exploited for tourist dollars. There are wildlife sanctuaries that are off limits for swimming and I don’t think I saw a single piece of trash on the ground. Very different to places in the Caribbean and Africa where some of the beaches are sadly strewn with rubbish.

6 The locals are really friendly 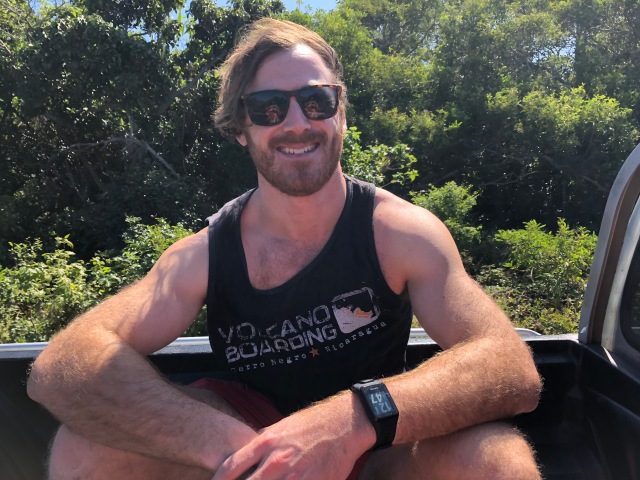 Hitching a ride in the tray of a ute

Despite the language issues, locals were so lovely to us and keen to help out.

7 So are the dogs

The local dogs are just gorgeous. They can sniff out friendly humans a mile away and will come up for pats and just to follow you and hang out for a few hours. They are healthy and well fed. As a dog lover it was absolutely one of the highlights of the whole trip! 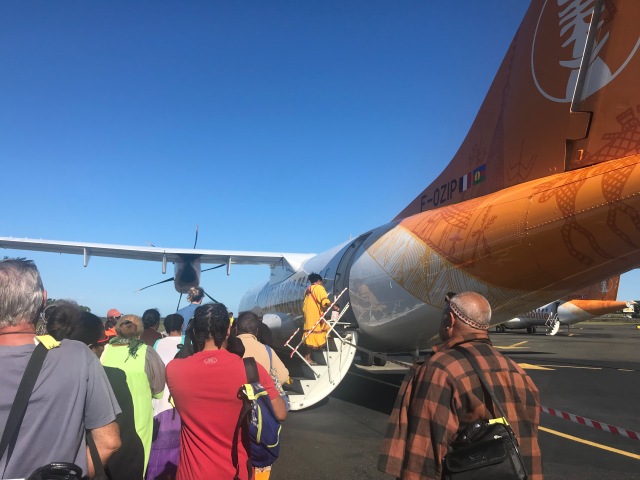 I’ve never known airports not to have metal detectors or bag screening! Not an issue just a funny little quirk.

9 The food is excellent

Think French pastries, steak and fries, fresh raw fish, lobster, baguettes and brie. We sure did have an excellent time eating.

Cheeses from a small convenience store 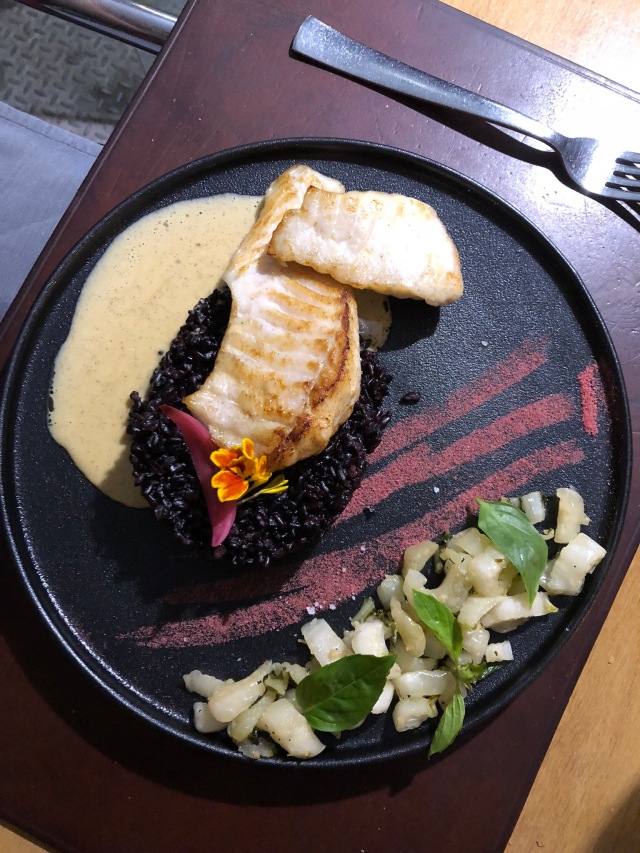 Dessert at Marmite et Tire Bouchon on my birthday

10 The snorkelling is incredible 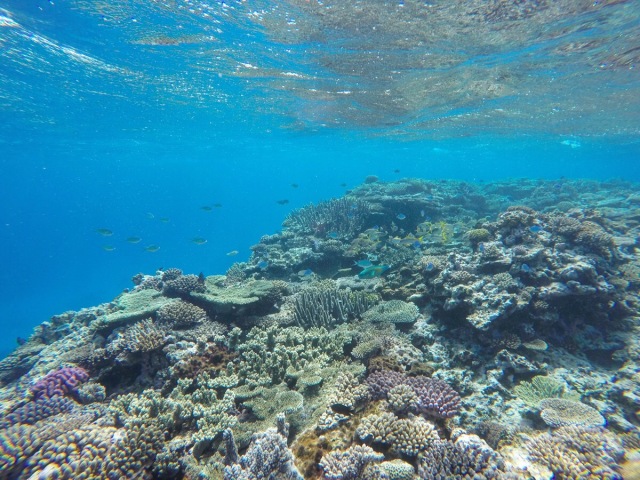 Kanumera Bay in the Isle of Pines

Snorkelling on my 30th birthday

I love nothing more than spending hours staring at fish and coral. Sadly, my dodgy eardrums won’t permit scuba diving so snorkelling it is. Andy kindly gifted me a day trip under the water for my birthday and we snorkelled with giant manta rays, colourful fish, sharks and spotted turtles from the boat. Such a dream.

A giant manta ray very low beneath me

Fish in the Natural Pool on the Isle of Pines

Sound good? Have you booked flights yet?! More about the two islands soon!