A few weekends ago, Andy and I packed our winter woolies and headed to Bright, a small town at the base of some of Victoria’s most popular mountains. It was early in the Australian snow season (it’s a real thing, I promise!) so we didn’t have plans to ski but hoped we’d see a bit of the white stuff. We weren’t disappointed.

We stayed at this AirBnb which was really just a motel room but it did have a spa and a fireplace; both essential for a winter mini break. Bright is very picturesque, surrounded by pine covered mountains with low cloud drifting in and out all day. Not all the shops and restaurants were open yet but we still ate very well. 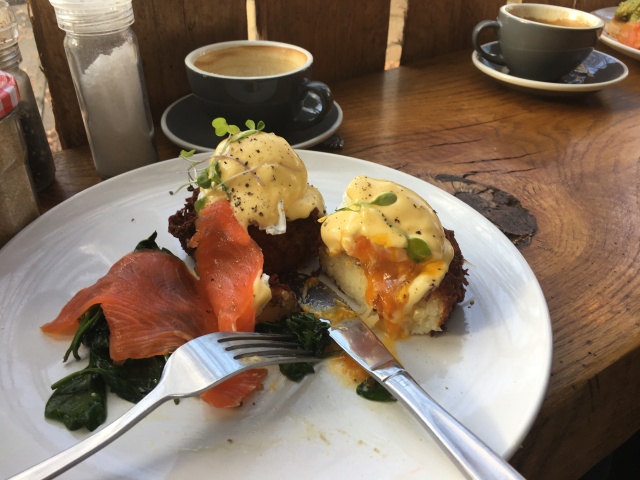 I had the potato rosti with cured salmon, spinach, hollandaise sauce & poached eggs

After breakfast we dropped into the visitor’s centre to find out the best way to head up into the mountains. The woman who helped us was beyond charming, in fact, everyone single person we spoke to in Bright was absolutely lovely. She informed us that we’d need a resort pass to head up to Falls Creek which would allow us to park and take a free chairlift into the village bowl. Seeing as it was already late morning, we bought an afternoon resort pass which was only $20 to enter after 1pm.

It’s mandatory to carry snow chains on Victorian mountains during the winter months so we dropped into the Shell petrol station to pick some up. Again, the man who served us was super friendly, he gave us a discount on the chains, sold Andy a pair of $50 gloves for $20 and lent us two toboggans for free! I wonder if everyone is this nice at the end of the snow season?!

The drive from Bright to Falls Creek is about an hour and a half. It’s not that far but it’s super windy. I skied a few times at Falls Creek as a child, so I was going out of my mind with excitement on the way up.

This was the view from the car park: 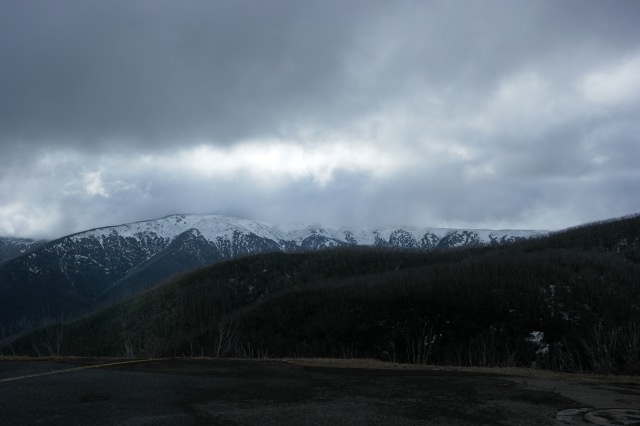 The snow was pretty patchy, but it was still beautiful. After getting the chairlift up to the village bowl we took ourselves off on a short hike. 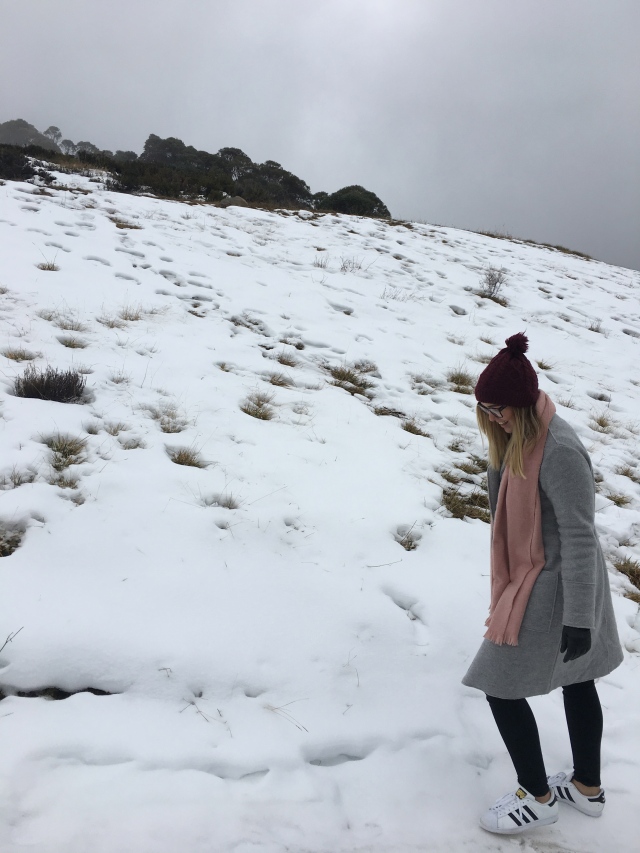 I’m not sure what the trail was called, we just headed uphill and away from the village. 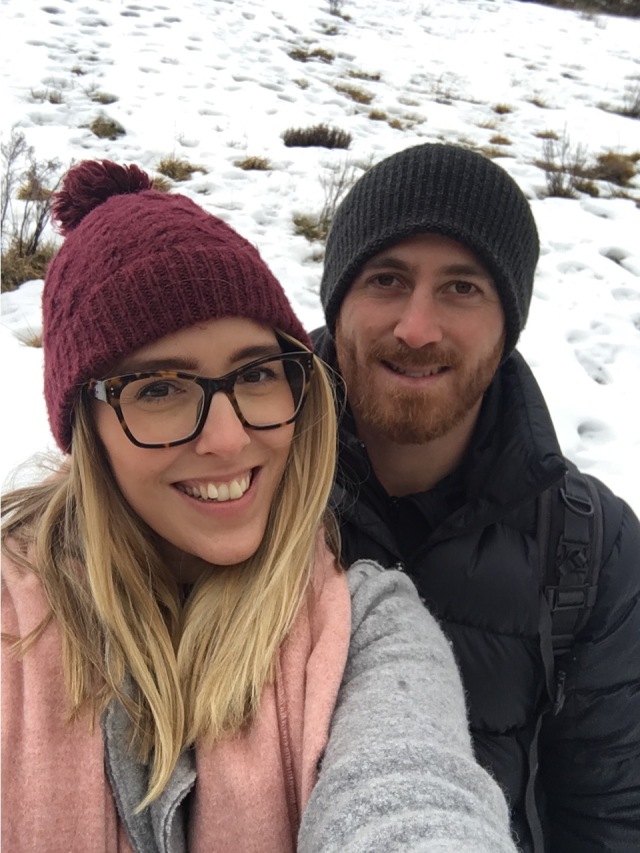 It’s funny, I’ve seen snow before and lots more of it, but I still couldn’t shake the excitement. Cold weather is so much more bearable when everything is dusted with snow. 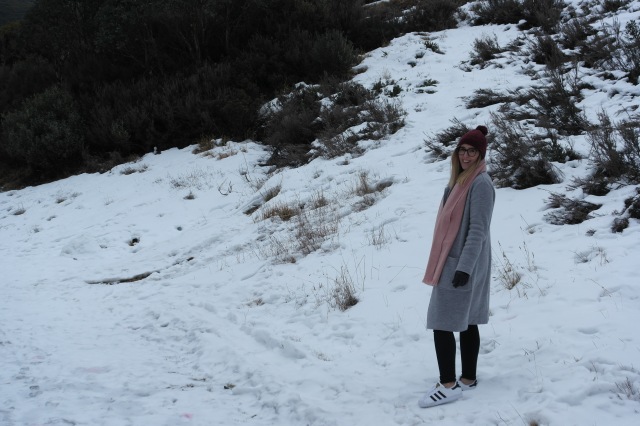 As you can see I wore my best snow shoes.

I copped a bit of flack on social media, but my ankles weren’t at all cold! Especially compared to my nose and cheeks. 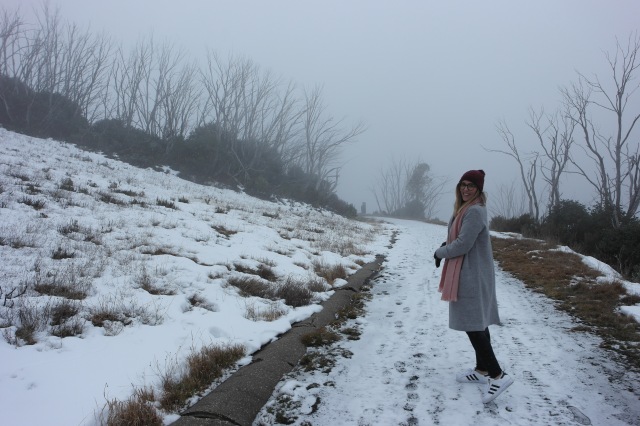 By the time we started to head back it was snowing quite a lot.

Which was great in my non-waterproof wool coat!

Feeling a bit soggy, we decided to warm up at the Falls Creek Hotel. 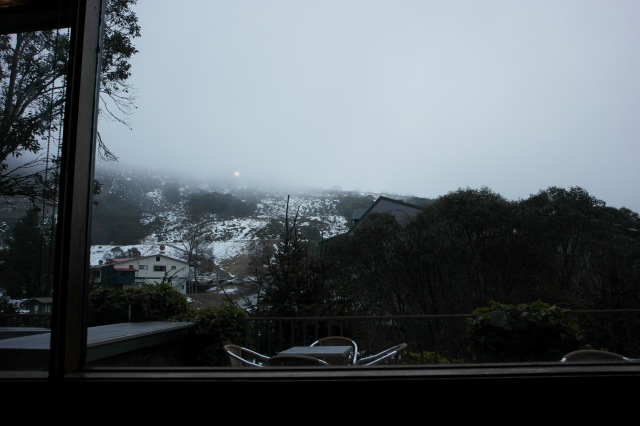 We had the entire place to ourselves! Unthinkable during the peak season.

The bar tender whipped up a couple of hot chocolates laced with Baileys. It was delicious! And rather strong. 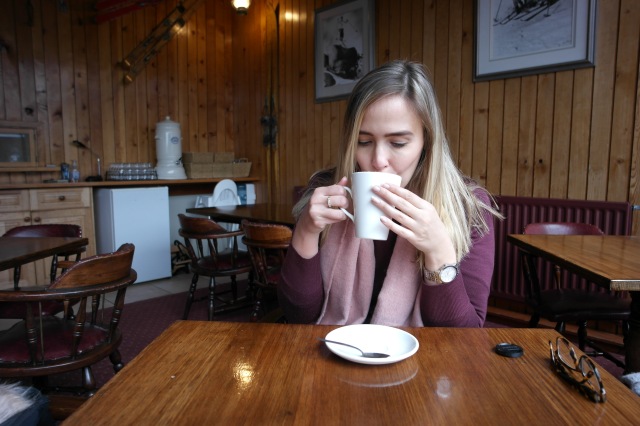 Eventually we got the chairlift back down to try and avoid the bad weather on the drive back.

My 100th attempt at getting a decent chairlift selfie

We emerged below the clouds and the sun was out at Mt Beauty. 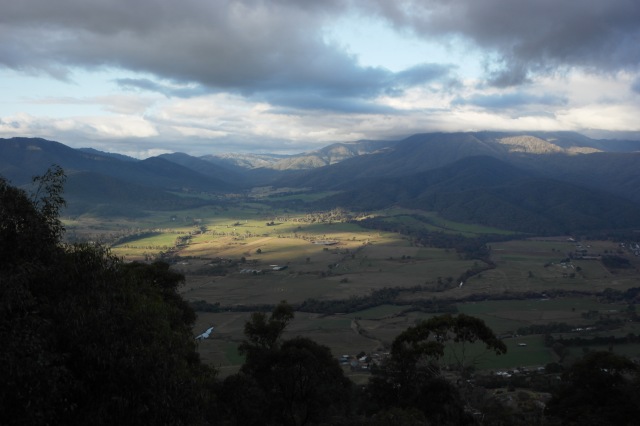 An amazing view near the town of Mt Beauty

That evening we stuffed ourselves with appetisers and craft beers at the Bright Brewery, another great local establishment. Little did we know there was a lot more snow in our future…