12 things you should know before travelling to: the Greek Islands

The Greek Islands are definitely not an untouched haven, but here are some things I wish I had known or that surprised me when we got there.

1 It is really windy

You can’t see the extreme wind in this photo, but it’s there!

No one seems to talk about how windy it is on the islands! It varies from bearable to completely miserable, getting-whipped-with-sand intolerable. We went to Crete, Santorini, Naxos, Paros and Tinos and it was the same story everywhere no matter what side of the island. For the most part it was fine but there were a few days that it just wasn’t possible to lie on the beach. On one occasion someone’s beach umbrella flew a couple a metres and straight into me; it was pretty funny. The owner at the villa in Paros said that usually August is windy but this year it had been so bad in July as well that she couldn’t put up any of the shade umbrellas.

All of the islands we went to had a good bus system. But when we were travelling as a trio with my sister it made more sense to hire a car. Buses are generally  2.50 one-way, so one return bus trip per day each would equal  15. On Crete our car hire cost  22 per day and allowed us to go much further than one return bus trip. It’s worth noting that most of the cars are manual (stick) and it costs more to hire an automatic car.

It’s like being back in any country south of America! Obviously this is not an issue unless your hostel/villa cleaner doesn’t change the bin often enough… Ew. 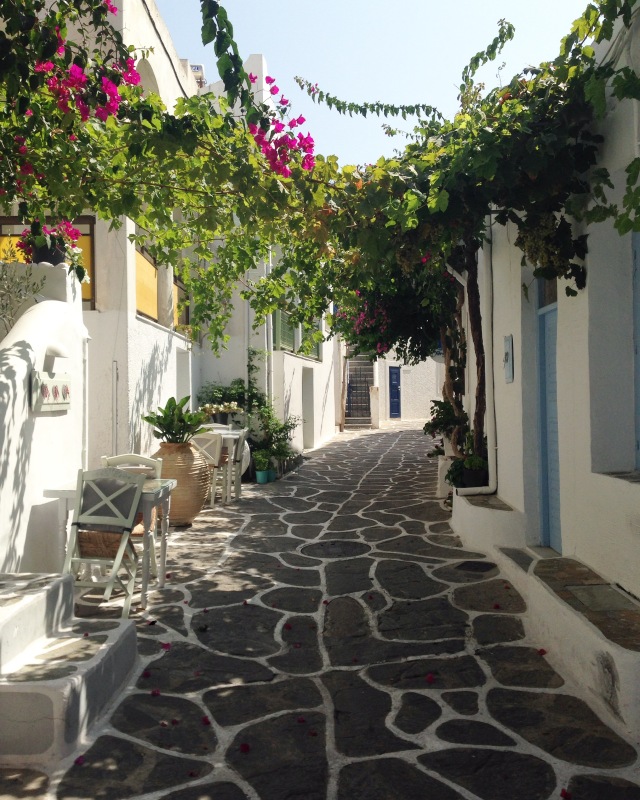 The streets are often blissfully quiet during this time

From 2pm-5pm most businesses shut for quiet hours. Shops close and reopen later in the evening but most restaurants seemed to stay open. We didn’t know about siesta time and accidentally woke the mother of the owner when we arrived to check in at our villa in Plakias, Crete. She wasn’t mad but I felt terrible! This is not the time to have loud conversations on your balcony or blast music. People stay up much later after a nap; you’ll be greeted with ‘good afternoon’ until about 7pm and people don’t sit down for dinner until about 9:30pm (unless they have kids).

5 English is widely spoken but learn a few words

Making an effort with language is always appreciated, even if you don’t always nail the pronunciation.

6 You can’t drink the tap water

Bottled water is very cheap though.

We bought snorkels on Amazon before we arrived because we knew we’d be using them every day and wanted to save money (we spent a fair bit hiring them all through the Caribbean!). But it turns out there are few places to hire snorkels anyway; everyone just has their own. You can buy a cheap set from most supermarkets and souvenir shops.

8 Most beaches have only a small area for public access 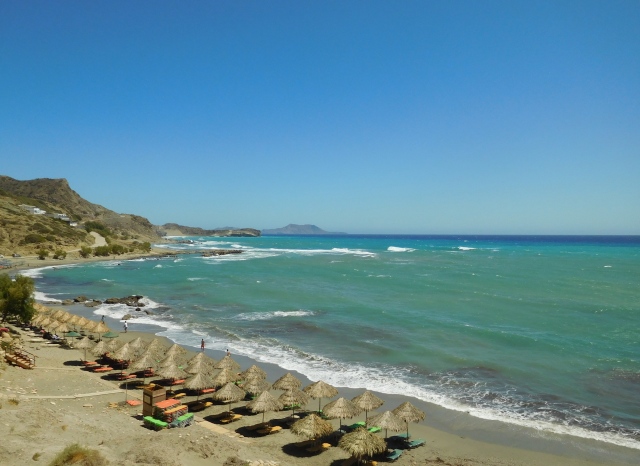 Most of the best swimming beaches are taken up by sun lounges and umbrellas that you rent from a bar or restaurant, with a tiny sliver of public beach in between or to the side. This is common in most beachy places we’ve been outside of Australia; where the beaches are sacred and owned by ‘the people’ not businesses. The cost of hiring a sun lounge is minimal ( 7-10 euros for a set of two for the whole day) but it’s perfectly acceptable to lay your towel down and sit for free. We did a mixture of both. When it’s really windy it’s better to be on a lounge as being a bit higher off the ground means you cop less sand to the face.

9 The islands have a wide range of sand, stone and pebble beaches

The variation of beaches is quite amazing. On Naxos we went to beaches with some of the softest, fluffiest sand I’ve ever experienced. Another beach was strewn with the most perfectly formed tiny shells. On Santorini our closest beach was ‘black sand’ but really just tiny black stones that get very hot underfoot as you walk to the water. There is also a red sand beach on Santorini. Some swimming spots aren’t really beaches but just places where rocks meet stunningly clear blue water. Disappointingly, there wasn’t one single beach we went to that wasn’t strewn with cigarette butts. I can’t fathom why people think its acceptable to litter some of the most beautiful places on earth with the leftovers of their nicotine habit. So sad.

10 The bakeries are amazing

All Greek food is absolutely incredible, everything from the range of amazing appetizers to Greek salad to moussaka, seafood and even gyros is mouth watering. But I’m going to mention the bakeries because while it’s easy to find delicious food in a restaurant, it’s less easy to find great snack food while on the go. The bakeries have a huge range of tasty sweet and savoury goods for  1-2 euros. My favourites were spanakopita and gooey baklava. The bakeries also do great bread for sandwiches and perfect chocolate croissants.

11 There is an island for every interest and budget 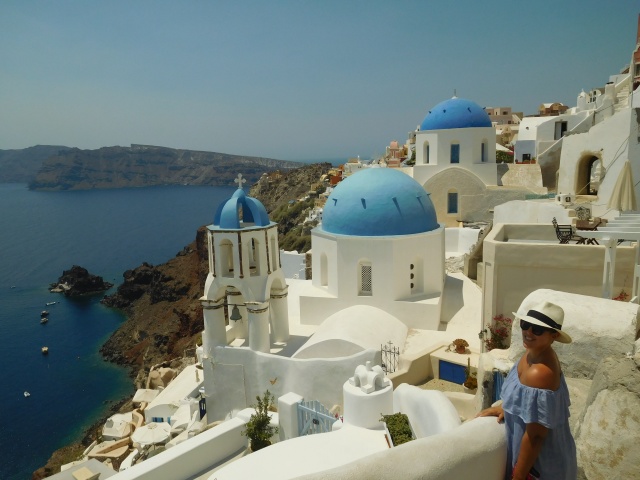 For us, Crete was by far the best island in terms of affordability, beaches and having a wide range of things to do and see. Santorini is expensive but if you can afford a stunning hotel with an infinity pool in Oia or Fira you are in for a luxurious time. Mykonos and Ios are the places to go to spend all day at a beach party with thumping music, probably with Australians. Paros was super chilled out and relaxed. Naxos was a livelier version of Paros and popular with kite surfers; the wind is good for something! Tinos is the island with a major annual religious pilgrimage and surprisingly great shopping! There are hundreds of islands to explore and all of them have something absolutely amazing about them. I really loved our time in the Greek Islands and if you haven’t been, I strongly recommend you go one day.

Before we arrived in Greece a few people told me I should ‘be careful’ because of the ongoing refugee crisis in the region. I’m not sure what that means in the context of me being a privileged, wealthy traveller choosing to go to Greece and the presence of Syrian, Afghani and Iraqi people desperately fleeing death in their home countries. Seeking asylum is not a crime and should not be viewed as a potential blight on your summer holiday. The islands where most people arrived are the ones closest to Turkey; Lesvos, Chios, Samos, Leros, Kos, Symi, and Rhodes (this information is from March 2016 published here). Last month Al Jazeera reported on increasing tensions in Leros which saw locals attack refugees and aid workers. By all means do your own research and educate yourself, but also consider learning about what people are going through (This American Life have just done an excellent series from inside refugee camps on the mainland) and if you can afford it, donate to the Red Cross.

This entry was posted in Travel and tagged Greece, Greek Islands, Things you should know, Travel, Travel Guide. Bookmark the permalink.

2 Responses to 12 things you should know before travelling to: the Greek Islands