Tulum: the ruins and the beach

I had very high hopes for Tulum and if I’m completely honest, my very first impression when we got off the bus wasn’t the best. You see, people always tell you to go to less touristy Tulum instead of Cancun; that evil, Spring Break infested, commercialised, resort town further north. So I was surprised to find that compared to other Mexican towns we had visited, Tulum was rather touristy and full of Americans in their hire cars.

Not that I have a problem with Americans! I’d rather Americans in Mexico over Australians in Thailand any day. We are the worst. Anyway. Tulum was just more western than I expected.

But any negative thoughts I had that first morning were completely dashed just a few hours later when we visited our first cenote. Tulum has so much to offer; the endless cenotes, caster sugar sand beaches, aquamarine water and delicious Al Pastor pork tacos.

Oh and Mayan ruins! Right on the beachfront.

‘Tulum’ is the Yucatan Mayan word for fence or wall, referring to the walls around the site that protected its inhabitants from invasions. 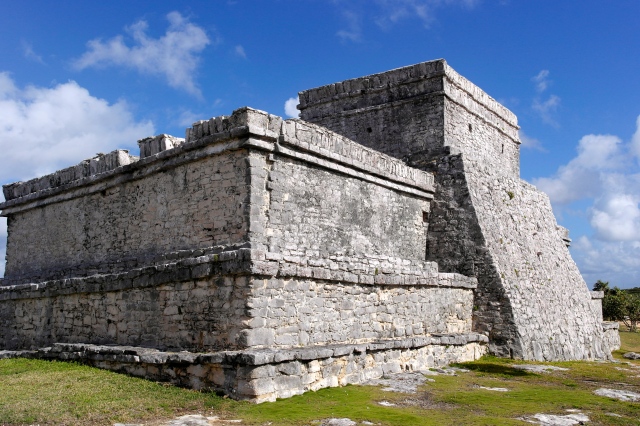 Really, why would you want to live in an ancient city in the middle of the Andes (like the Incas at Machu Picchu), or the jungle (the Mayans at Palenque) when you could have this view?

Tulum was constructed between 1200 and 1450, making it one of the last cities built by the Mayans. 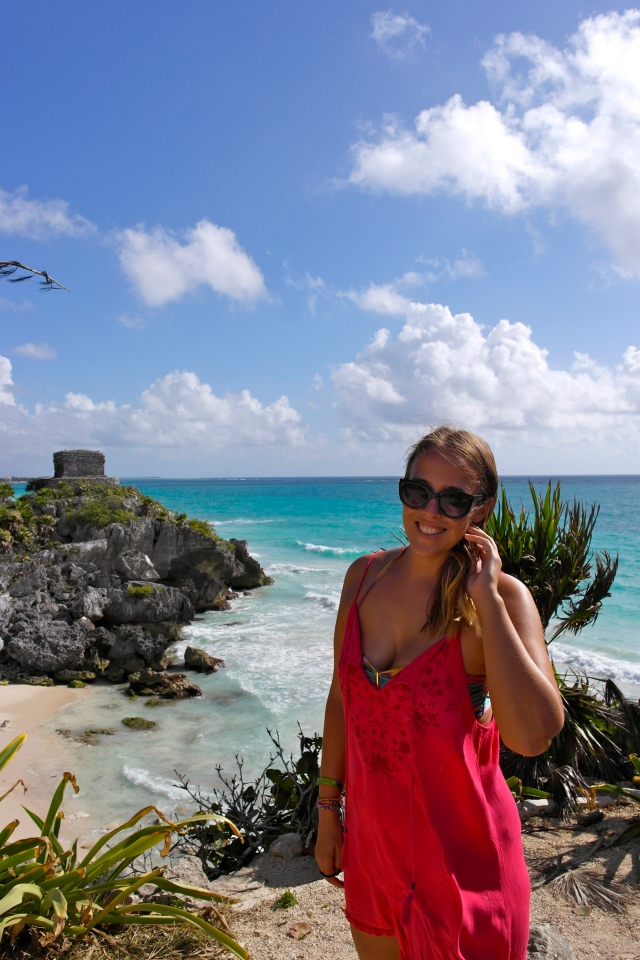 The locals that live there now have a distinctly herpetological nature. Kind of like Australia’s most recent ex PM.

There are iguanas crawling all over the ruins, so if you hate reptiles this might not be the best day out. Some of them blend in so well with the ruins you don’t even see them.

These next few GoPro shots came out kind of yellow? No idea why! 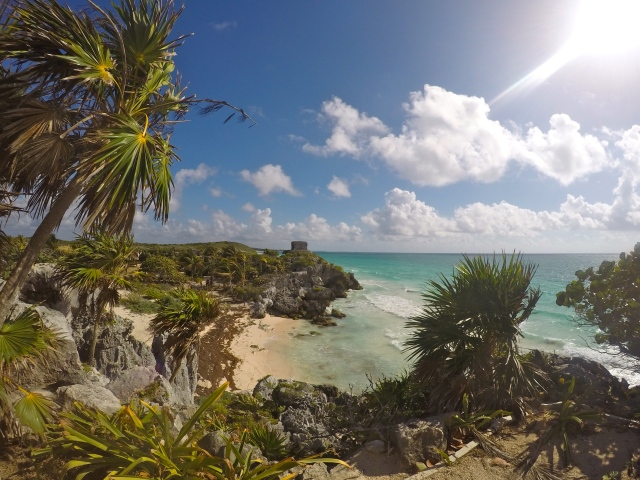 Before Andrew trimmed his beard. Wow.

My invisible wind machine at it again

Itching to get in that water 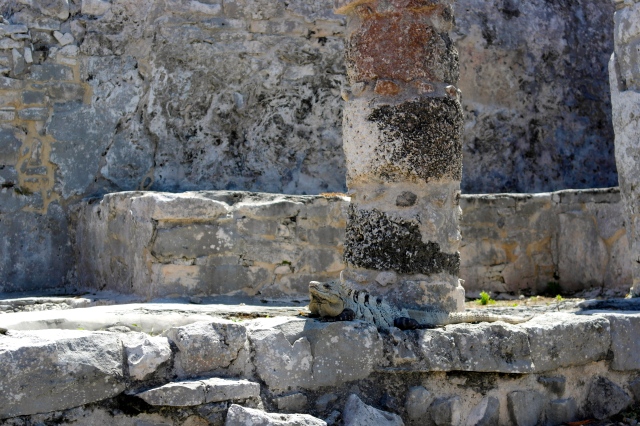 Eventually it gets too hot to keep walking around looking at old piles of stones, which is fine because the ruins have beach access.

Get me in that water 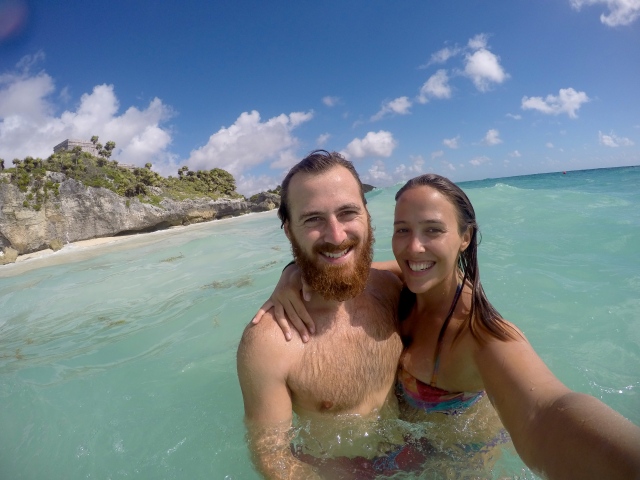 The beach at the ruins is tiny and very, very busy. And I’m not just saying that because I’ve been spoilt by Australia’s stunning, empty beaches. Even a normal person would have found it a bit claustrophobic I think… Although many people were taking selfies despite the fact there would have been stupid amounts of people in the background. I’m kind of obsessed with not getting other tourists in my photos, a fact about myself I only realised recently when someone asked why there were few other tourists at the Palenque ruins! Oh there were many, trust me!

I digress. The beach at the ruins got too packed so we left in search of a quieter spot.

We passed this huge iguana, just posing on a tree, along the way.

We found a public access beach maybe a kilometre or two south of the ruins. 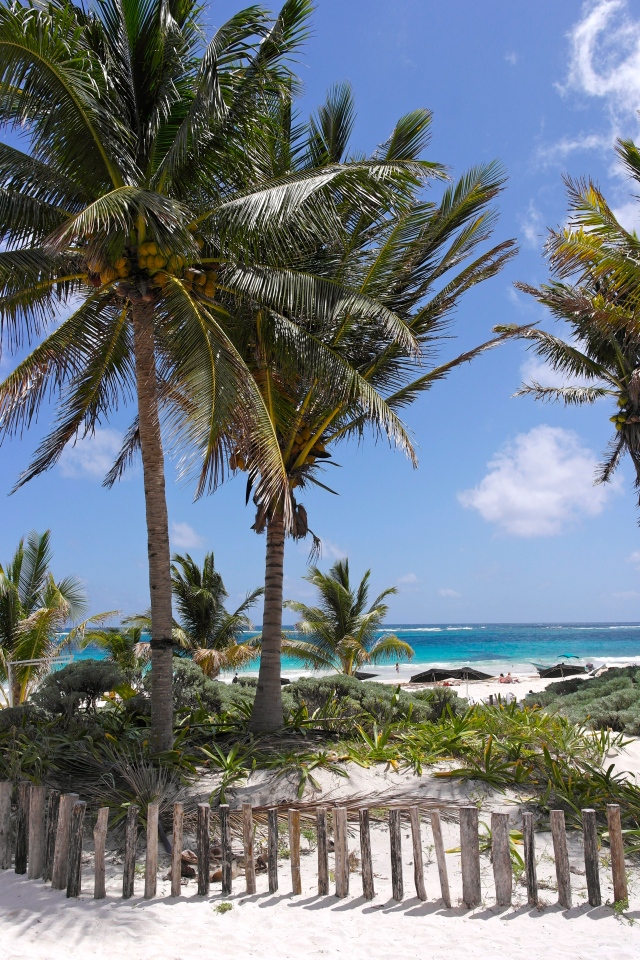 We let ourselves be sold a one hour snorkelling trip from the beach. It was a complete mistake and entirely not worth it. We saw hardly anything. A few days later we did some snorkelling that completely made up for it, more to come on that!

The one good thing was seeing the ruins from the water, which was kind of cool. Double thumbs up for no fish!

When we were back on the sand we read and relaxed with a coconut in hand.

Not bad Tulum, not bad.

5 Responses to Tulum: the ruins and the beach