Top 8 things to do in Buenos Aires, Argentina

Let me just begin by saying that this was meant to be a top 5 list of Buenos Aires. The fact that it blew out to 8 is a pretty good indicator of just how much I loved the place. Argentina might just be my favourite South American country so far, and its capital certainly does not disappoint. Here’s what you should do:

Have you ever seen a more beautiful array of food? I doubt it.

Argentinians take their meat very seriously and it would be rude not to partake in a steak. Unless of course you are a vegetarian, in which case maybe you should question your need to travel there (kidding!).

I highly recommend Parilla Pena. You get mountains of free bread and a complimentary empanada each as well. I had the rib eye steak and had to convince the waiter I wanted it rare, but rare it did come. THANK GOD (years of having overcooked steaks in country Australia has scarred me for life). We ordered a big chunk of blue cheese to have atop our steaks but they were so tasty we barely needed it. Of course we ate it anyway. If only we weren’t too full for desert… Next time.

An important part of exploring Buenos Aires is exploring its eclectic neighbourhoods, not just the city centre. San Telmo is the oldest ‘barrio’ or neighbourhood in the city and is chock full of beautiful old buildings (some literally crumbling before your eyes), street art, cafes, tango parlors, antique shops and cobblestone streets.

If wanky coffee is your thing head to Coffee Town located inside the Mercado de San Telmo (San Telmo Market). The market was built in 1897 and has antiques, vintage clothing and some of the biggest, most delicious avocados I’ve ever tasted. Coffee Town imports fair trade beans from all over the world and it will take you an hour just to decide which hipster method of coffee creation you want the baristas to employ. Cold press is so hot right now.

A street corner in San Telmo

La Boca is another old barrio that was settled by European immigrants, mostly Italians from Genoa. The name ‘la boca’ means ‘the mouth’ in Spanish and it is called so because it is situated at the mouth of the river.

La Boca’s two major attractions are La Bombonera, the stadium home to the local but world famous soccer team ‘Boca Juniors’ and Caminito, a pedestrian street lined with colourful homes made from corrugated iron and other materials left over from the local shipping trade.

While Caminito is somewhat of a tourist trap, it’s a great place to take photos and see some live tango being performed outside restaurants. Despite being so touristy, La Boca is still a rough neighbourhood so be careful. 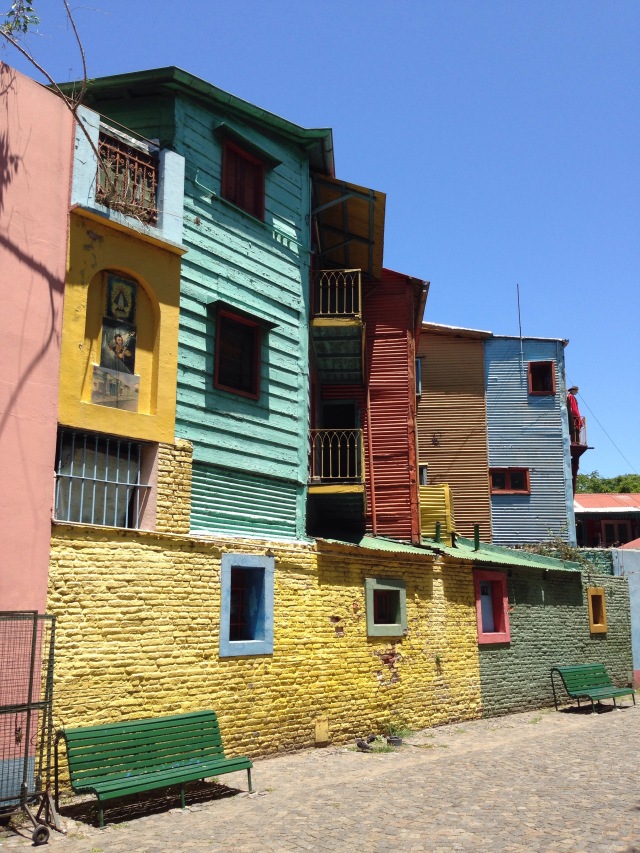 A mural dedicated to the local team

There are some very touristy live tango and dinner shows in BA, but I didn’t go to one so I’m not sure what they are like. A friend of mine went and said it was fun, but that she felt like she was on a cruise ship.

We opted for a local tango venue, known as a Milonga, called the Buenos Ayres Club in San Telmo. We got there as a lesson was finishing up and then watched as locals took a spin around the dance floor. I’m not talking about the sexy young couples you might associate with tango, but the immaculately dressed older people who have done the dance for decades. The night we were there the El Afronte orchestra played very striking and dramatic music, which certainly added to the mood. And this was a Wednesday night!

Check out the Recoleta Cemetery

Located in a wealthy area worth wandering through, the Recoleta cemetery is home to the ‘who’s who’ of deceased Argentina, including much loved 1940s first lady Eva Peron.  The cemetery dates back to 1822 and has elaborate above ground mausoleums. Many of them have windows through which you can see coffins stacked on shelves like creepy bunk beds. 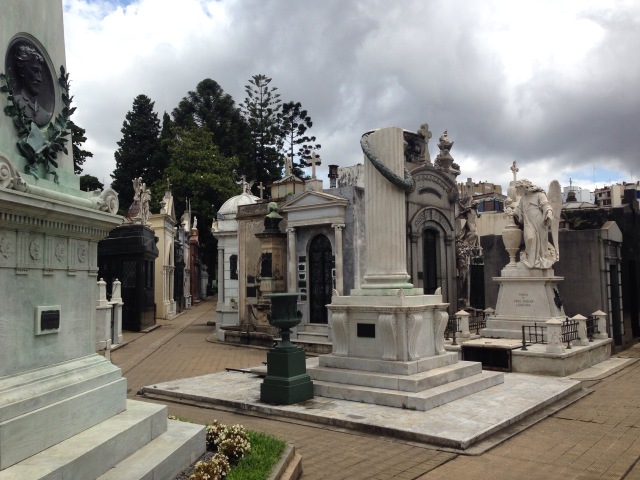 Tip: there is an excellent ice cream shop right across the street from the cemetery if you need a pick-me-up afterwards!

The Plaza de Mayo is where the 1810 revolution happened, leading to Argentina’s independence from Spain. It has been a hub of political activity ever since then. The presidential palace, known as the Casa Rosada (pink house), sits on the eastern side of the plaza. The Perons and many other presidents and first ladies have saluted people in the plaza from the balcony of the Casa Rosada and it is where Madonna belted out ‘Don’t Cry for me Argentina’ in the movie adaptation of the musical Evita.

The Plaza de Mayo is also where the Mothers of the Plaza de Mayo meet every week. They are an association of Argentine mothers whose children were ‘disappeared’ during the military dictatorship between 1976 and 1983. Their peaceful marching began in 1977 in a bid to learn what happened to their children and raise awareness of the human rights atrocities taking place in Argentina. Their symbol, a woman’s head in a white scarf, is painted around the plaza.

Do a BA Bike Tour

BA Bikes offer daily bike tours around the city on either the south or north circuit. Since Buenos Aires is so big and spread out its a really convenient and fun way of sightseeing. We did the south circuit and checked out La Boca along with other great places. The guides are really cool and have great recommendations. Definitely one of the best things we did in BA. 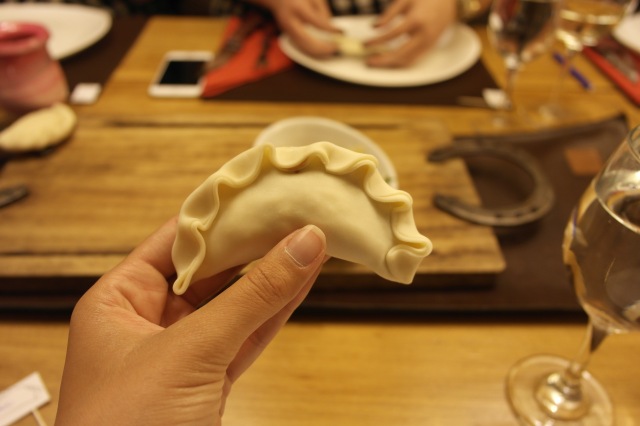 My very own empanada

If you missed my last post all about the Argentine Experience click here. It’s basically a dinner experience where you learn all about Argentinian culture through the food and drinks. It’s a crazy amount of fun and also very delicious. Definitely a must-do as far as I’m concerned.

Have you been to BA? Got any plans to go? Any recommendations to add?

2 Responses to Top 8 things to do in Buenos Aires, Argentina