Biking, NOT hiking, at the Colca Canyon

The main activity to do in the Colca Canyon is hike. But after the Inca Trail I was hesitant to take on a two-day trek offered by most tour companies. Then I got a message from one of our Inca Trail companions, Jacqui.

“I hope you’re not planning on hiking the Colca Canyon..”. Ominous. She went on; “We just did it. Bloody hard. More intense than the Inca Trail. My body feels broken.”

Well. That’s a definite no from me.

So instead we hired mountain bikes from our hostel, Pachamama (which I highly recommend), and were driven up to the top of some nearby mountains in a bright red combi van.

I was very happy with our decision as we rattled up the mountains in the back of the combi, with a hostel dog wedged between us, watching snow capped mountains appear in the distance. It took about an hour to get to the top, where the air was pretty thin. 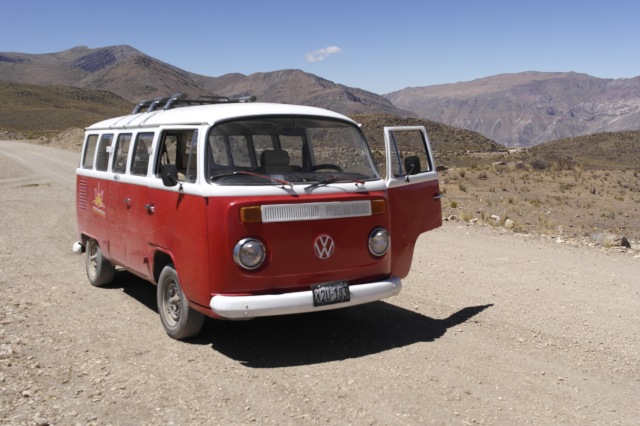 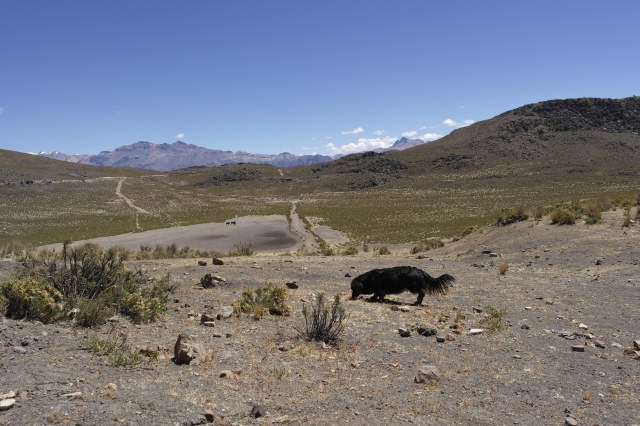 Hostel dog! One of them

We jumped on our bikes and set off. 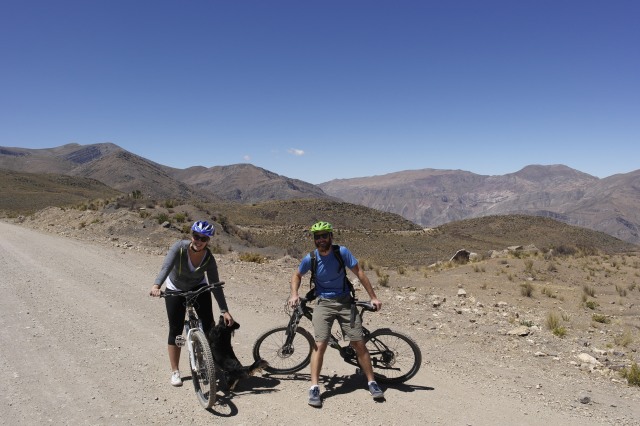 The views were absolutely breathtaking. 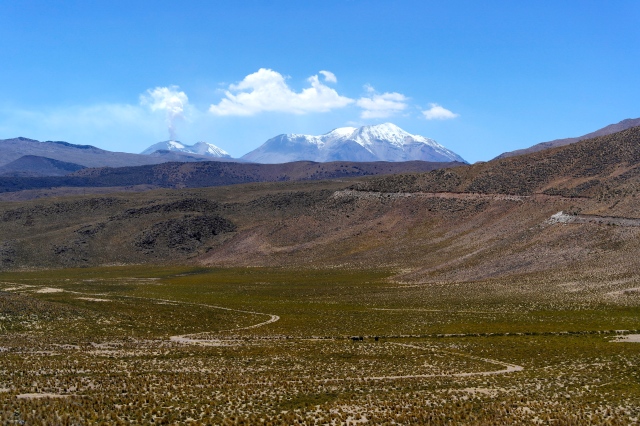 Smoking volcano on the left! 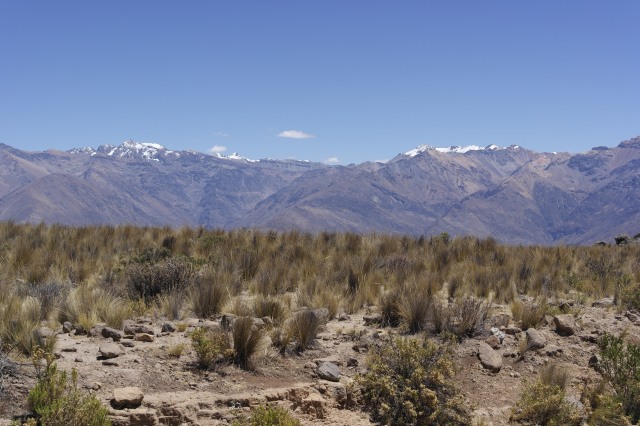 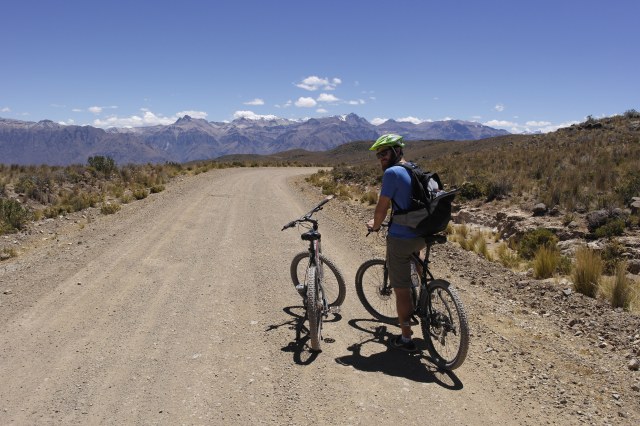 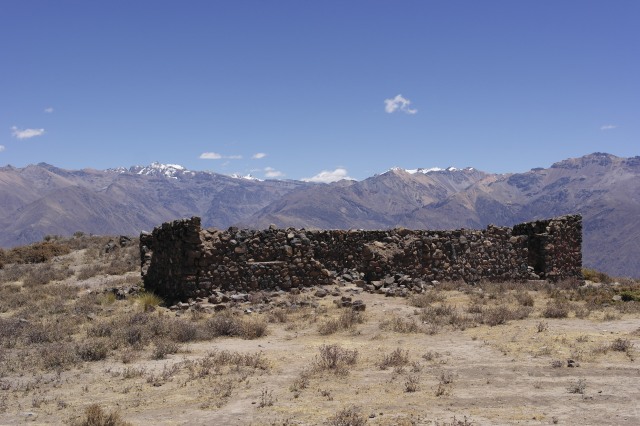 The road was quite steep and rocky in parts, I could feel my bones rattling. I was amazed I only almost came off once. 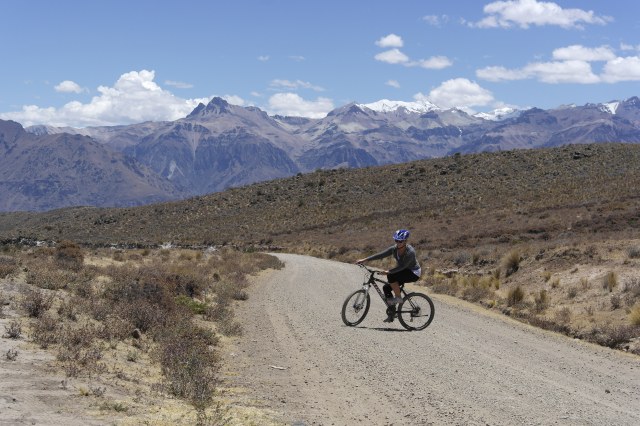 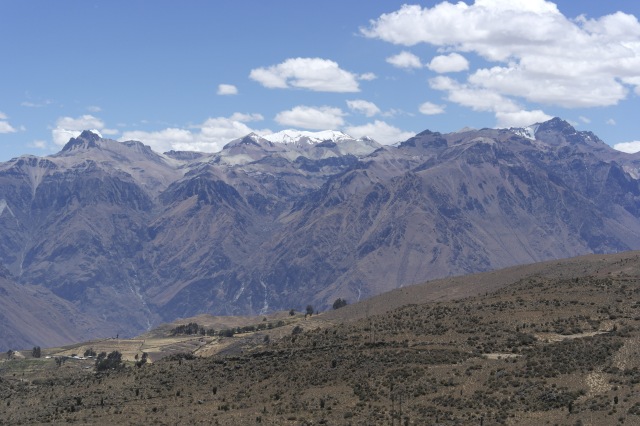 I find it strange to be able to see snow and cactuses at the same time: 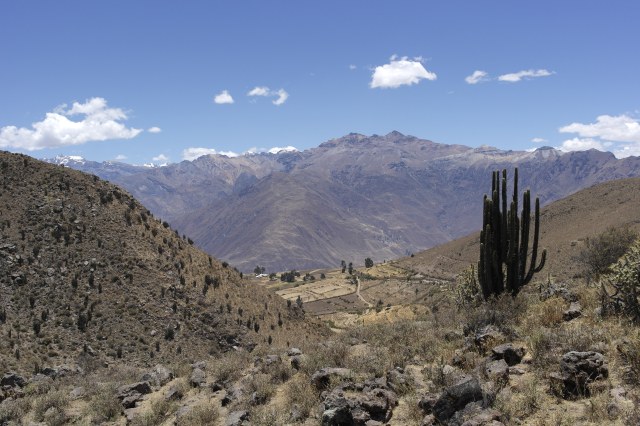 As we got lower the farms started to reappear. 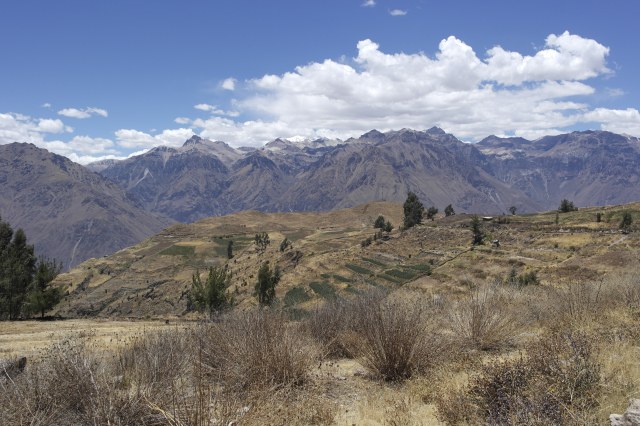 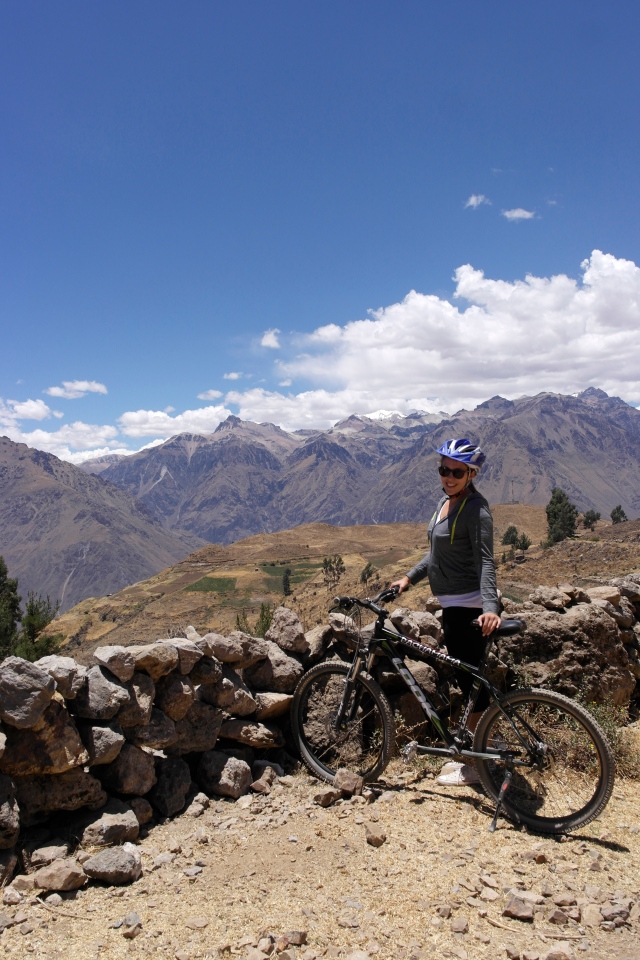 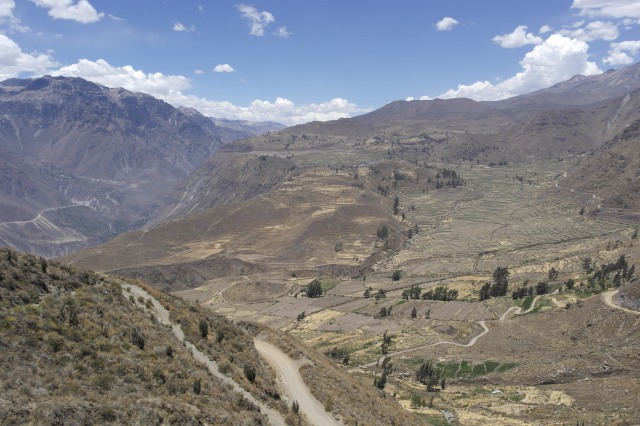 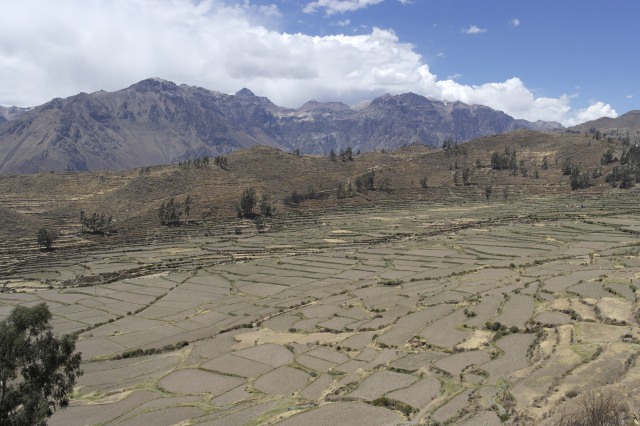 There was a cruel uphill part right at the end, when my arms were killing me and my palms were blistered (from holding on so tight). But then we saw the sign. 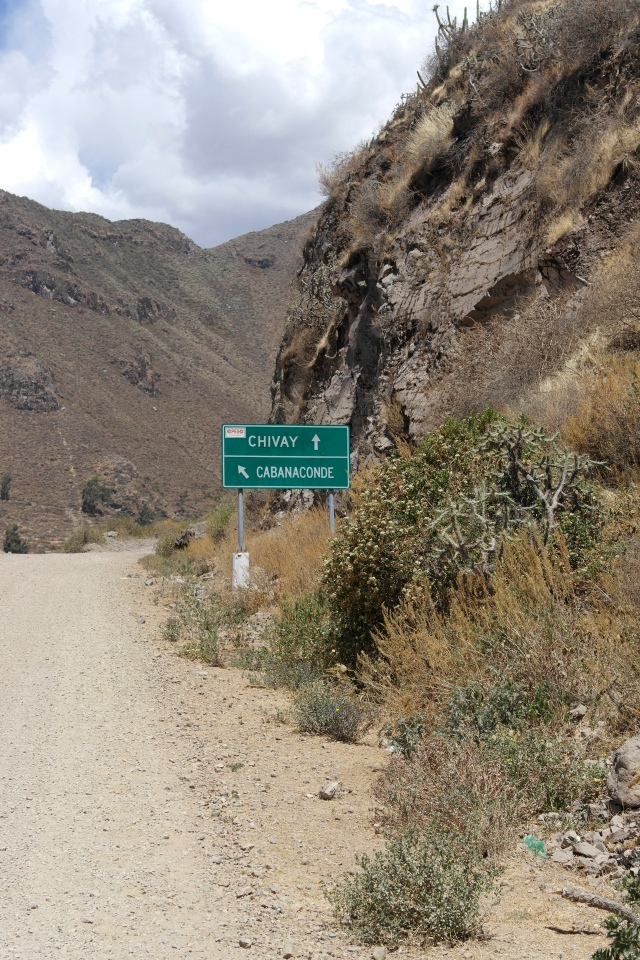 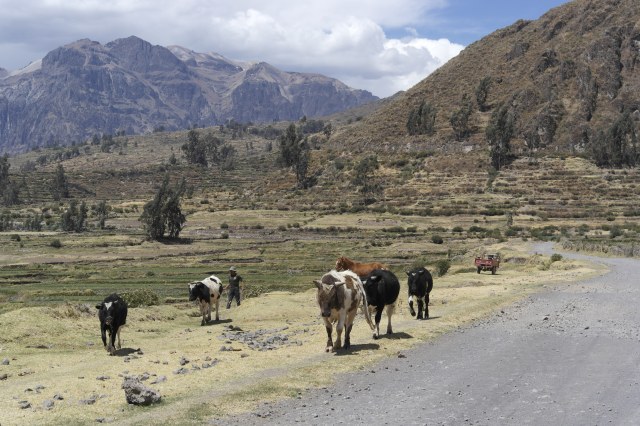 It took us about 3 and a half hours to get back to the hostel! It was so much fun though.

We pretty much just lazed around Cabanaconde for the rest of the day, hoping to spot our pal Lomo, but she was nowhere to be seen. 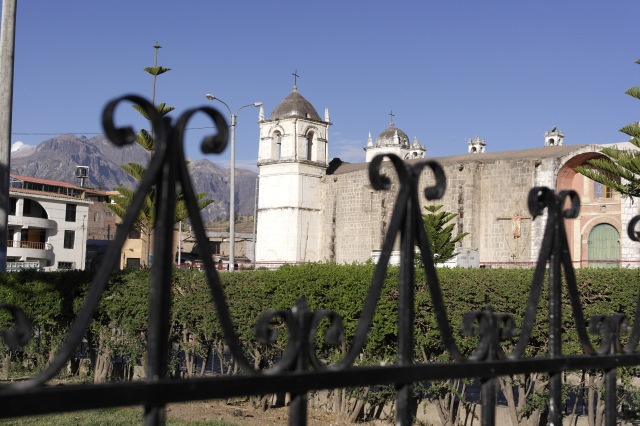 Cabanaconde’s church, which is used for storage?! 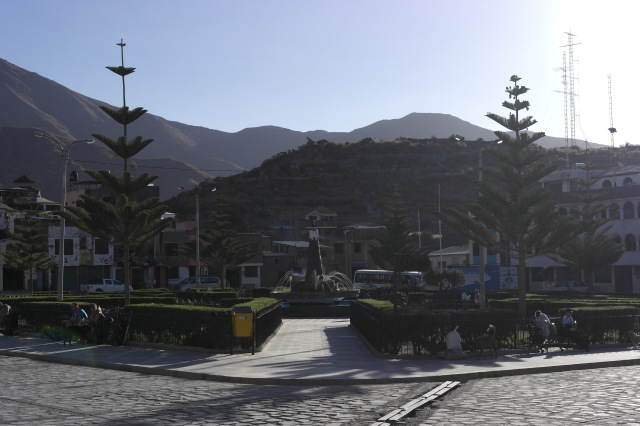 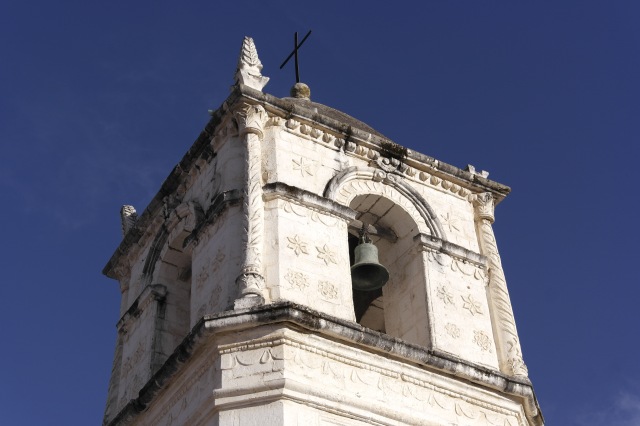 Then next morning Andrew got up bright and early to hike to the Oasis hot springs in the canyon while I slept in and read my book (bliss!). He appeared some hours later, extremely sweaty and out of breath.  Apparently it was painfully steep, the steepest incline he’s ever hiked. I was seriously chuffed with my decision to sit out.

This entry was posted in Travel and tagged Bikes, Colca Canyon, Peru, Travel. Bookmark the permalink.

4 Responses to Biking, NOT hiking, at the Colca Canyon