New Orleans quickly and dramatically elbowed its way to the top of my list of all time greatest cities in the world, ever. I immediately loved everything about it; the rich and complicated history, the Spanish architecture, the friendly and resilient locals, the convenient cable cars, the city parks and the damn good music on every corner. Oh and the food.

The food will send your taste buds into a tailspin, whether its a giant and satisfying Po’ Boy, zesty cajun shrimp, a creole gumbo, deep fried alligator or a fluffy french beignet doused in powdered sugar. We don’t usually eat out every day (budget restraints) but we loosened the reigns for New Orleans. Below is everything we ate and loved.

On our first evening in New Orleans we were wandering around the French Quarter, starving after a day of driving, when we came across Royal House. To be honest we were exhausted and in a bit of ‘anything will do’ mood when we took a seat on the balcony. Thankfully our gamble paid off and we were not disappointed. 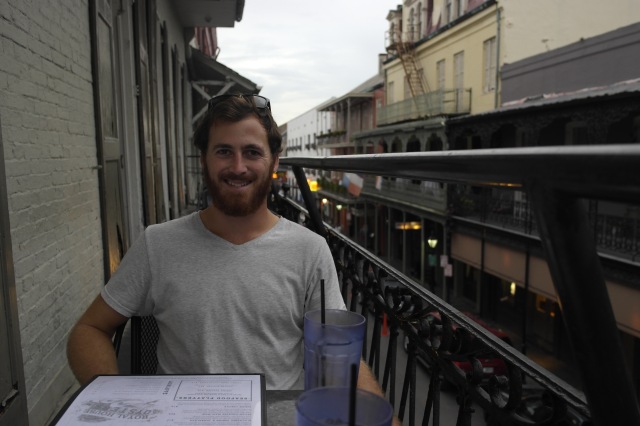 Across the street is the oldest and one of the most expensive restaurants in New Orleans, Antoine’s. The place has been around for 170 years! Impressive. 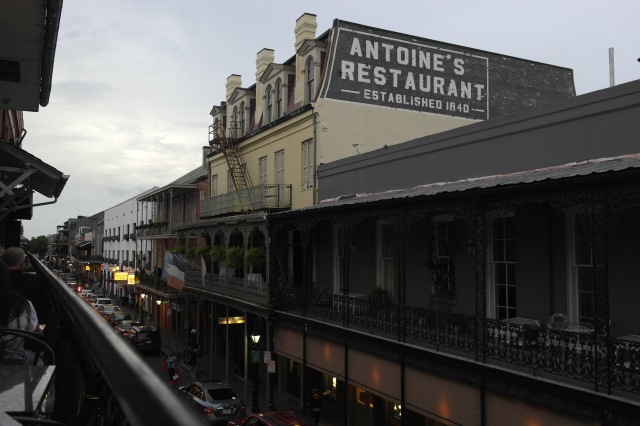 What is this face?

Here’s a tip, if you check-in on Yelp you get a free appetiser. We chose the spinach dip. 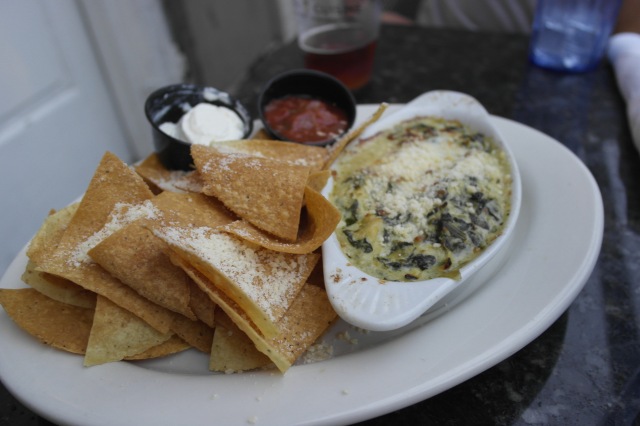 For main course I had blackened shrimp and jambalaya; a classic New Orleans rice dish with chicken and andouille sausage sautéed with peppers and onions topped with shrimp.

Andrew had an alligator Po Boy. The story goes that in 1929 a restaurant in New Orleans began providing free sandwiches to the streetcar conductors who went on strike for 4 months. The strikers were jokingly referred to as ‘poor boys’ and soon the sandwich took on the same name, eventually shortened to Po’ Boys. There are hundreds of kinds of Po Boys, with beef, ham or friend seafood inside.

Sitting on that balcony, watching the world go by below us and catching the odd few notes from a busker somewhere nearby was very relaxing. An excellent start.

The original Cafe du Monde opened in the French Market in 1862 and is famous for its beignets. A beignet is a square piece of dough, fried and covered in powdered sugar. Beignets were brought to New Orleans by the Acadians, French colonists who settled in the Acadia region of Canada. The word ‘Cajun’ originates from ‘les Acadians’.

It’s customary to have beignets with a cafe au lait (coffee with milk).

They aren’t conservative with the sugar 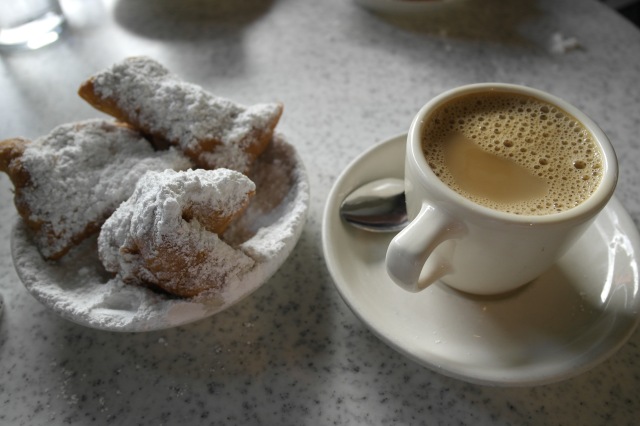 They are amazingly doughy and sweet and yummy. 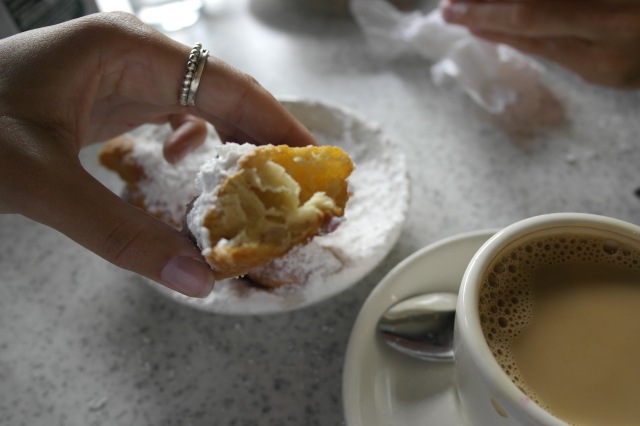 Cafe du Monde is always packed with tourists, but so worth it. It’s open 24 hours.

Napoleon House was recommended to me by our walking tour guide and boy am I glad we followed it up. The place just oozes history; the building dates back to 1797 and was named so because it was intended as a residence for Napoleon Bonaparte after his exile. The plan to smuggle Napoleon to Louisiana was apparently thwarted by his death in 1821. 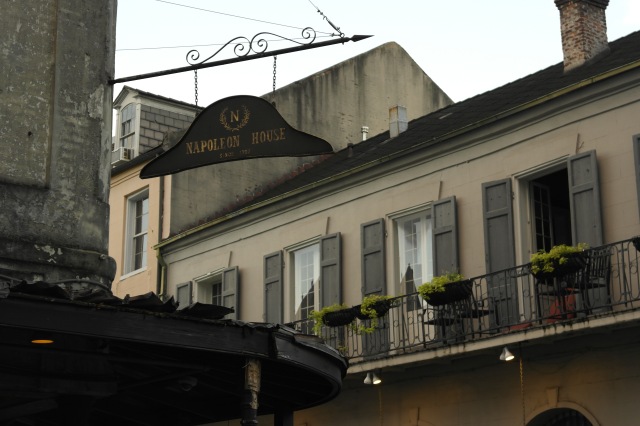 The building’s first occupant was the mayor of New Orleans. The bar and restaurant have existed there since about the end of Prohibition. 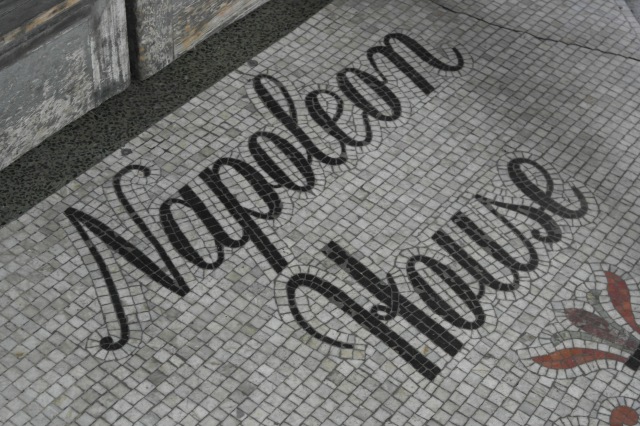 The inside is absolutely charming, with pictures (many of Napoleon) dotting the crusty walls and scrubbed wooden tables welcoming the hungry and thirsty.

The place is renowned for its Pimms cups, which I find strange as England failed miserably at taking New Orleans. I ordered the seasonal Pimms cup and it was delicious.

The prices were so good, that I think we got ahead of ourselves by ordering the cheese platter. After all the place had a French name, but it was still America cheese which I find pretty bland. 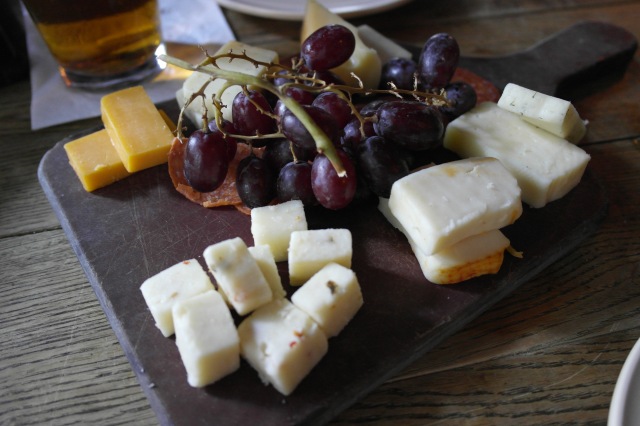 The cheese was pretty tasteless, but at least it looked good 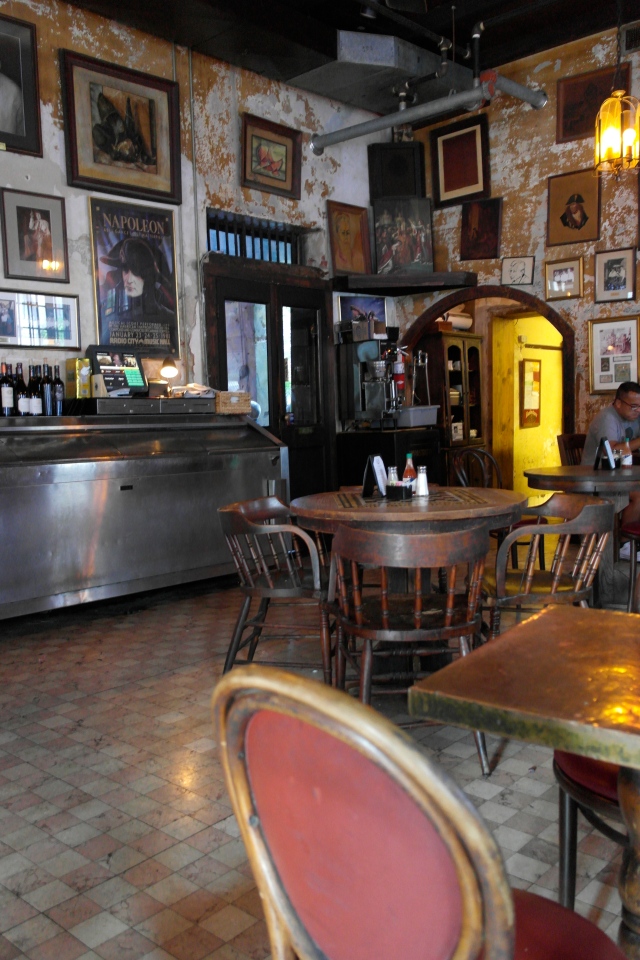 Main course was far superior, I had seafood gumbo:

And Andrew ordered half an Italian muffaletta, a huge sandwich with two kinds of meat and three kinds of cheese and olive tapenade.

Yes that is *half* a sandwich

The waiters, who were all delightfully surly, didn’t rush us out the door at all which was strange given the massive line the was starting to form at the door. 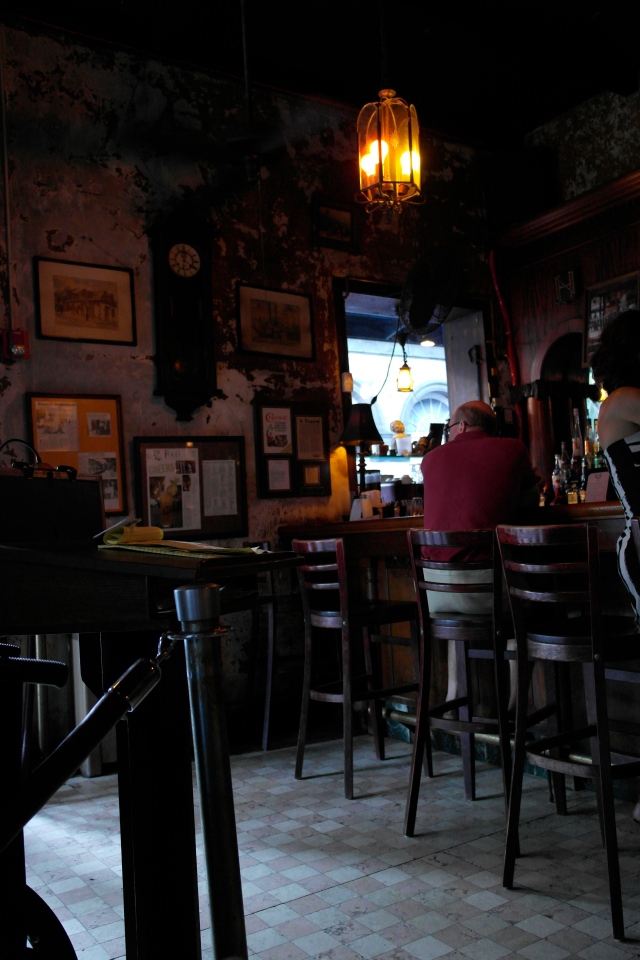 We sat there and people watched, ordering more drinks like the jerks we are. 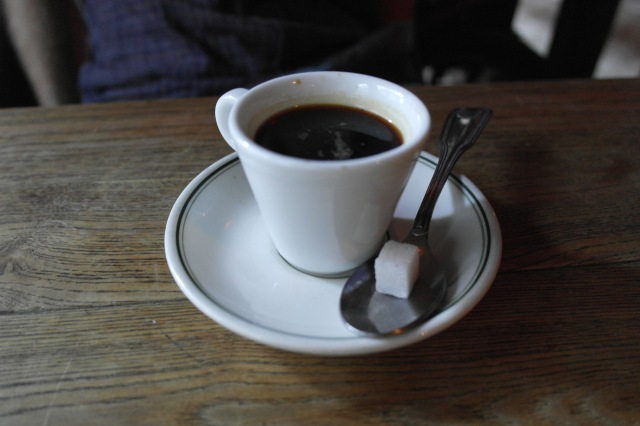 The bill for two beers, a Pimms cup, a glass of wine, a cheese plate, seafood gumbo, a half muffeletta and an espresso came to $56. Crazy!

On our final evening we took a ghost tour (not at all worth $25 each, sadly) and went to grab an easy dinner beforehand. We ended up at Mike’s Cajun Pub & Grub outside the French Quarter.

You could get as many wings as you like for 50 cents. I love happy hour.

We also shared a Po’ Boy, because I hadn’t tried one yet.

It definitely lived up to expectation. It was game day so we watched the Saints lose to Arizona.

Sunset in the French Quarter

The food alone is a good enough reason to travel to New Orleans. But there are so many more, next up; the music!

6 Responses to New Orleans: the food