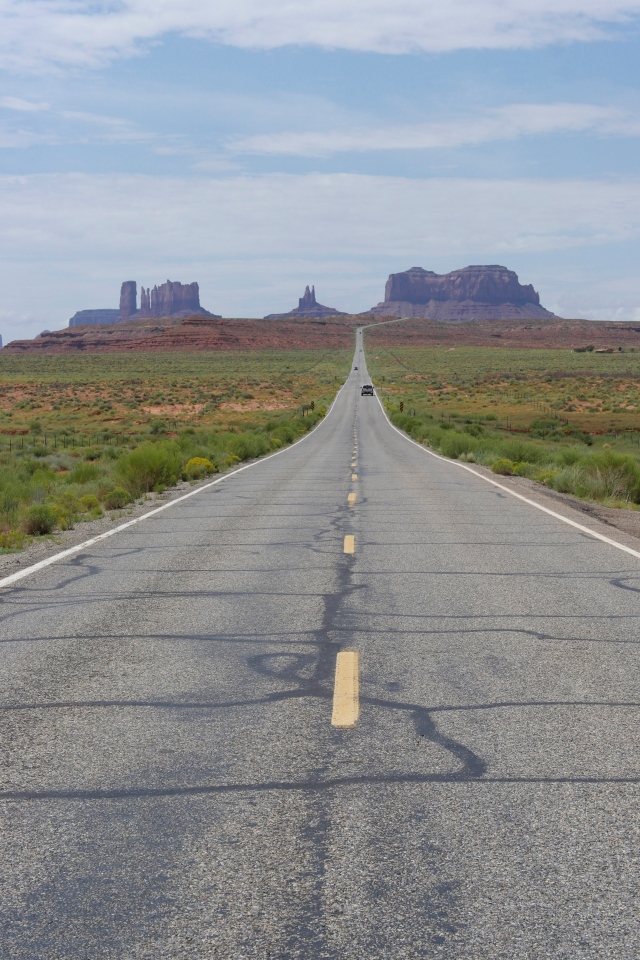 That’s the view you get travelling on the US-163 towards Monument Valley, a vista immortalised in countless movies including this part of Forrest Gump.

Monument Valley is one of my favourites places in the world. Five years ago my friend Kate and I slept there under the stars, waking with faces full of red sand to see the sun rise.

At risk of sounding horribly corny, it’s a really special place that feels foreign and familiar all at once. The tall red buttes that rise from the ground are dotted around the otherwise austere landscape and it just feels like of magical. 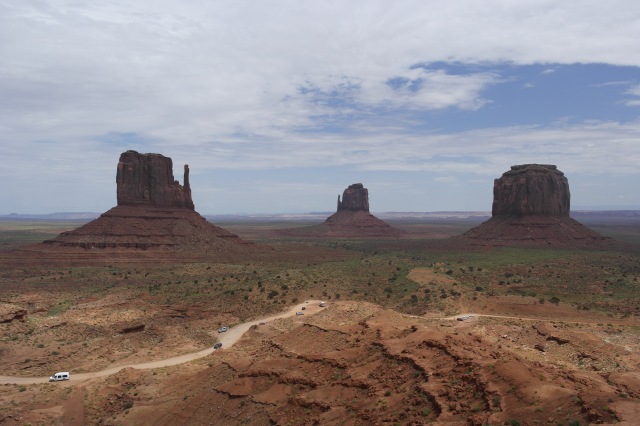 We took Goldie, our car, for a spin around the valley checking out the various buttes and mesas that hold strong and important meaning for the Navajo people. 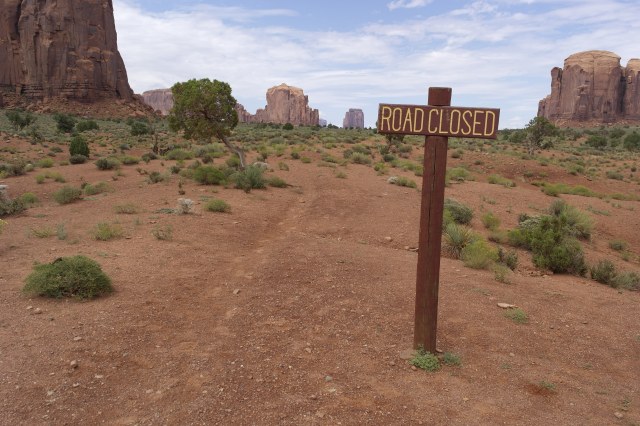 Monument Valley has supplied the backdrop for many Westerns after becoming famous in John Ford’s 1939 movie Stagecoach, starring John Wayne.

So they named the lookout below John Ford’s Point:

I snuck this photo from afar

I was just about to fork out $1 for a photo when they took a break for lunch, so I got this photo (for free) instead: 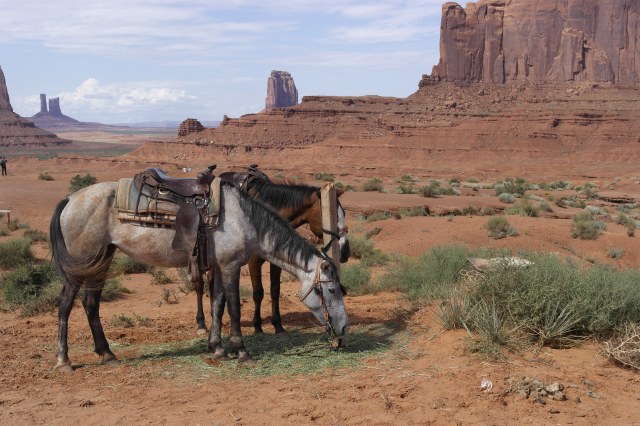 Andrew and I at John Ford’s Point

We wound on along the bumpy road, stopping for more pictures. 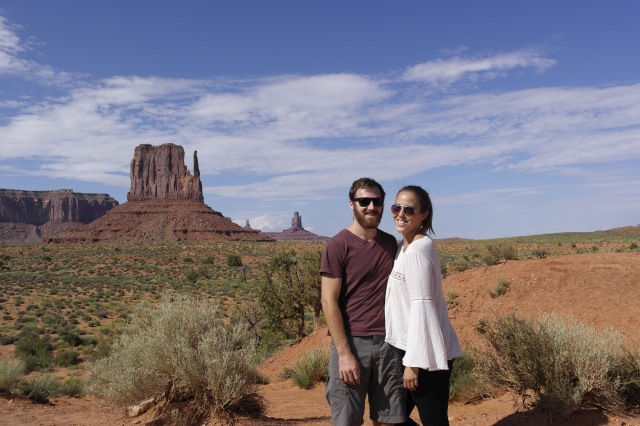 Camera on the car + self timer = win

Token ‘looking out into the distance’ shot

We stayed in delightfully average accommodation, wedging our tent between a row of tipis (or teepees, as they are also known) and the manager’s RV. 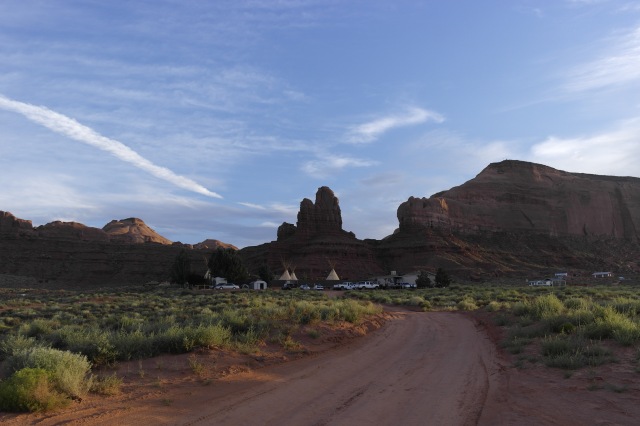 This place had “only been open for a year”, and they were still ironing out niggles here and there. The manager told us how a French family had complained about rain coming into their tipi the night before and that there was nothing he could do. He said it was just the ‘authentic experience’, but for $85 a night plus tax I think staying dry isn’t too much of an ask!

Because we were staying next to the managers RV we overheard conversations involving would be guests and their lost bookings, and saw people searching for the ‘breakfast’ component of their ‘bed and breakfast’ experience the next morning.

There was an issue with the internet that I tried to talk to the manager about. Eventually I just told him I was going to go into the office and switch the router off and on, which I did and magically it started working. I was the internet hero. Also there were only two toilets for at least 30 people and the family running the accommodation had a bunch of dogs roaming around, jumping on people. That didn’t bother us, but we’re dog people.

It was kind of hilarious in a Fawlty Towers kind of way. They were lovely and the view was pretty good though:

We headed back into the Monument Valley park for sunset. There were hundreds of other people there and Andrew and I were the only people speaking English. I think all of Europe must be on holiday in America! I wonder if there has been a big tourism campaign there?

The sunset was spectacular.

It even looked good in the reflection of this muddy roadside ditch:

The stars that night were incredible.

Because my insomnia woes follow me no matter how many oceans I cross, I woke the next morning with plenty of time to catch the sunrise.

Sun not up yet 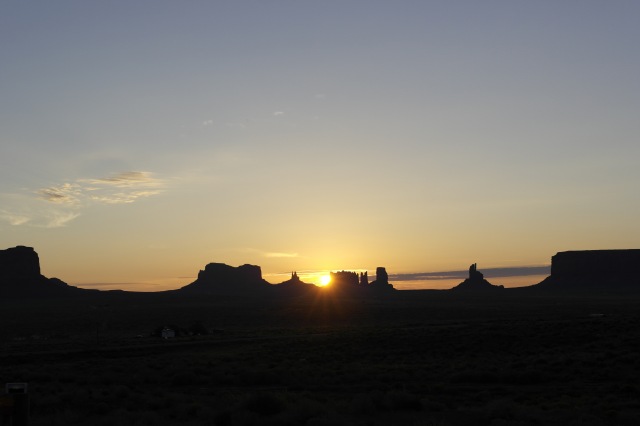 We packed up the next morning and hilariously, the owner asked us to pose for a photo for their website and gave us his business card, saying we should write reviews and tell people about the place.

We smiled and thanked him, then laughed it off and jumped in the car.