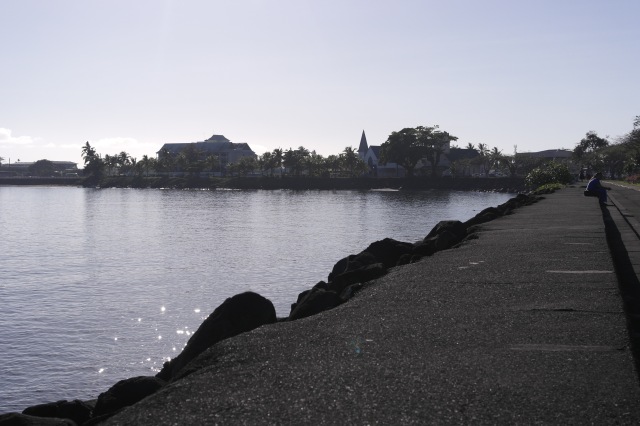 My sister Sarah and her partner Nick live in a breezy suburb in the hills in Apia, Samoa. From their balcony you can see all the way to the harbour, which actually is quite close. 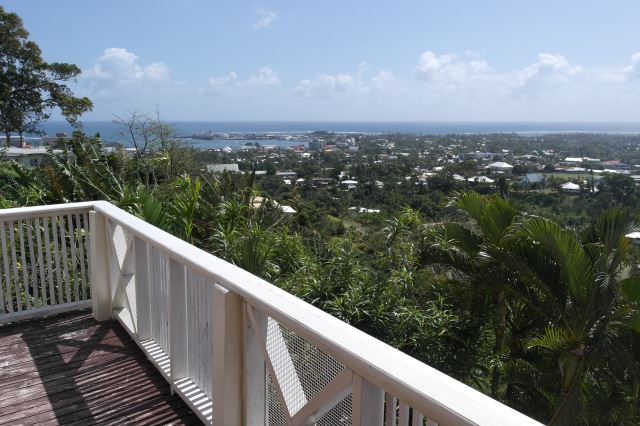 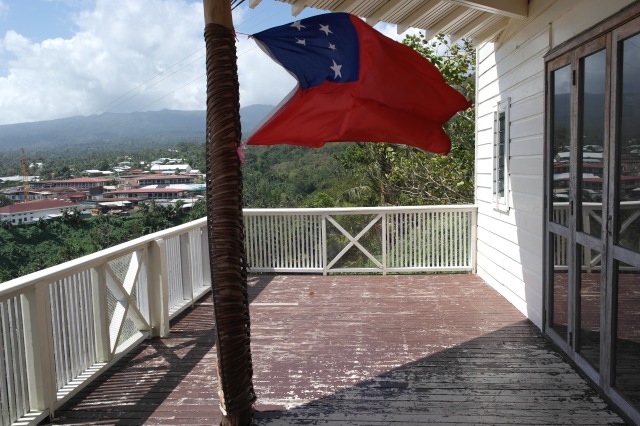 Their garden is full of colourful flowers, lush greenery and is home to the World’s Smallest and Most Adorable Pineapple. 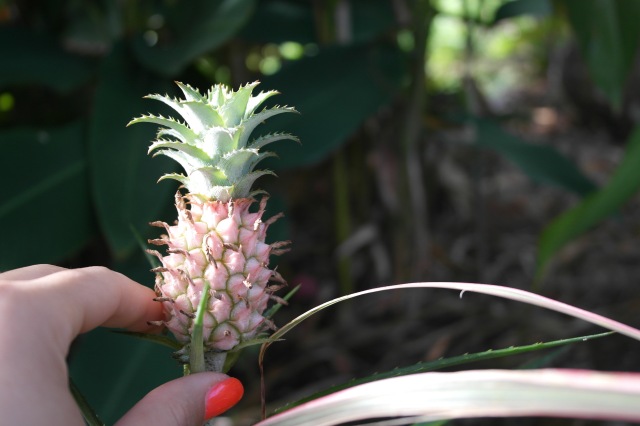 Here I am, in the hammock, which days later collapsed as I was sitting in it, causing me to land with my entire body weight on my left butt cheek. Horrifying. 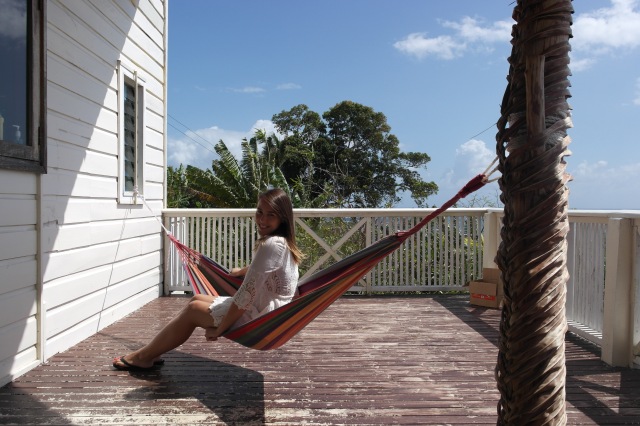 Sarah, Nick and their housemates said it happened recently and that the rope needed replacing. Sure. I think it had more to do with visits to the next two eateries:

Honestly, the local food in Samoa wasn’t particularly exciting or in some cases, edible. Taro and miscellanous meat don’t really do it for me. But the burgers at Izzy’s were damn fine. Even if the onion rings did repeat on you a little. I ate there on two occasions. 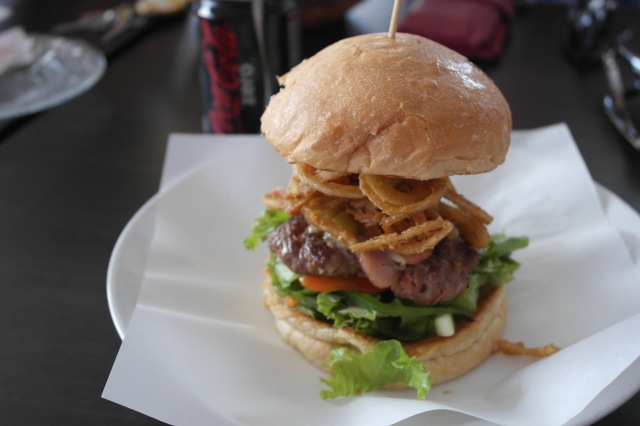 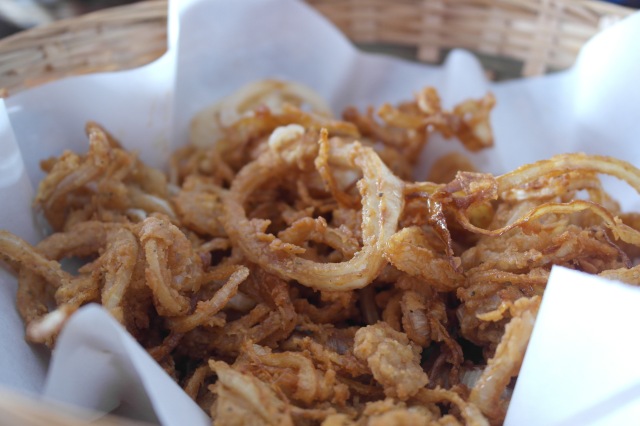 I can’t remember what this one was called but it was coconut crusted fish and it was delicious (and lighter than the Texan): 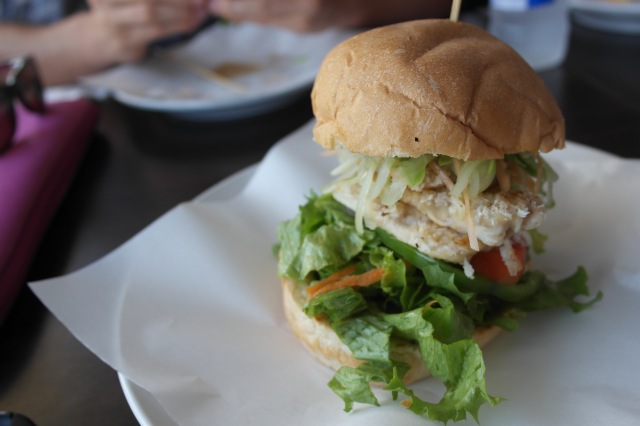 Where to start? Home (cafe) was ridiculously good and so appropriately named because I could have been in Melbourne the two times we ate there. It was so awesome, in fact, that I wish to dedicate an entire blog post to it, so I won’t say much here. But here’s a sneak peek of the French toast with bacon and maple syrup. 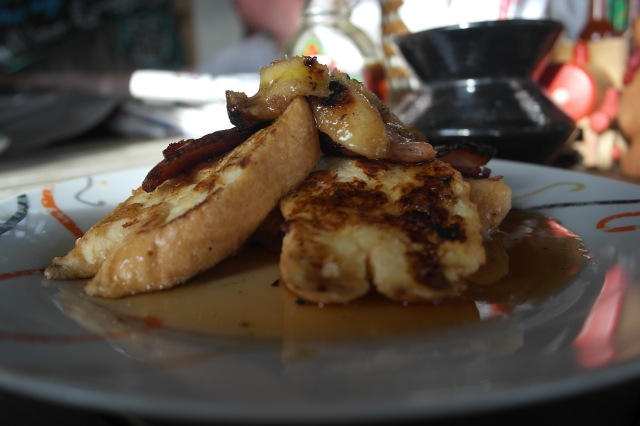 I die. After all that eating (and with plenty more to come) it might be appropriate to move around a bit. Which brings me to the next point:

CultureX is a Polynesian dance aerobics class not unlike Zumba. It’s done at the gym just like Body Combat or Attack. My sister has raved about CultureX for months so I knew I would have to try it out. It was sooo much fun. Ladies wear a traditional Samoan lavalava over their gym gear. You shake your hips, booty, errything (or just jiggle in that awkward white girl way) for just over an hour and end up looking like this: 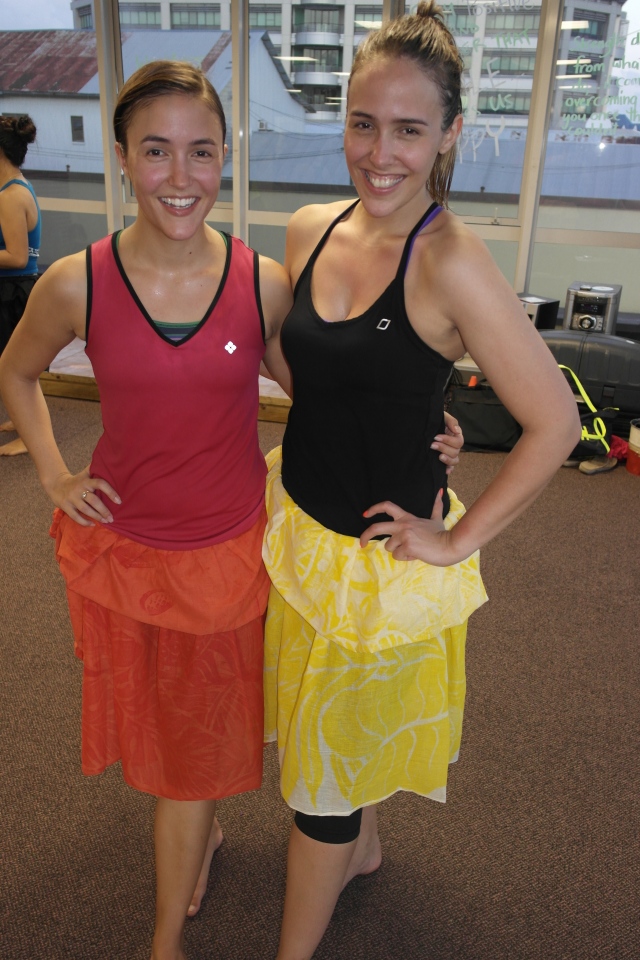 This photo doesn’t adequately capture the sweat. We were dripping. You think you sweat a lot in Bikram Yoga? HA! Try doing high intensity aerobics in a tropical country in a non air-conditioned room, then talk to me. The instructors are so enthusiastic, as are the CultureX goers, who high five between each set or song. It’s not like here where gym instructors try to rouse a ‘yeah’ from the class are are met with blank sweaty stares. I’ve never given so many high-fives in my life. Which was perilous because high fiving with mutally sweaty hands results in a sweat explosion. And sweat stings the eyeballs.

I’m trying to think of a good segway into the next topic but I can’t soooo….

I kind of regret not having taken a bus anywhere in Samoa because: 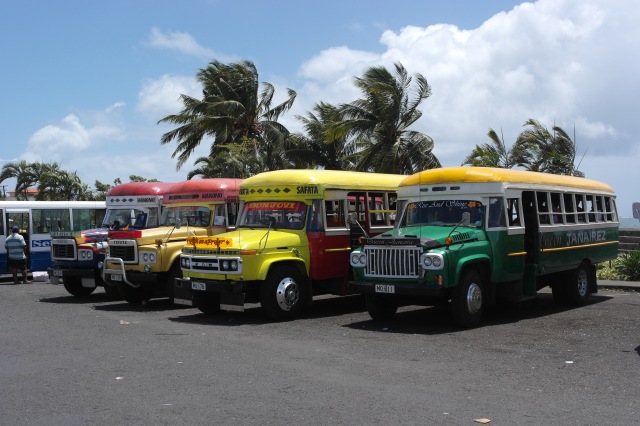 Look how awesome they are! And yes, that yellow bus says ‘Bon Jovi’ on the front. Perhaps Guns’n’Roses is more your style? 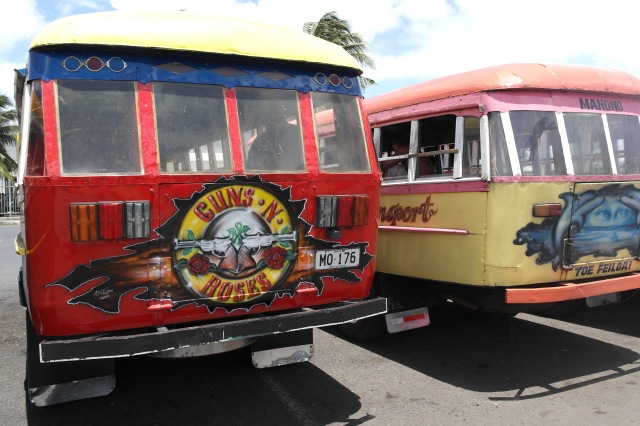 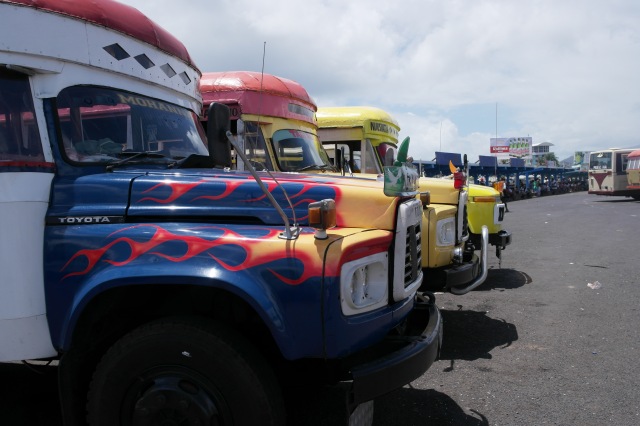 The buses blast pop music from their tinny speakers as they trundle along at walking pace. Pop or reggae-ised versions of non reggae songs, including Celine Dion. It’s awesome. Apparently there is kind of a system as to who sits where, and the locals helpfully point Palagis (white people) to the right seat. There are no doors or windows and people just stack on top of each other when it gets busy.

Right next to the bus station is the: 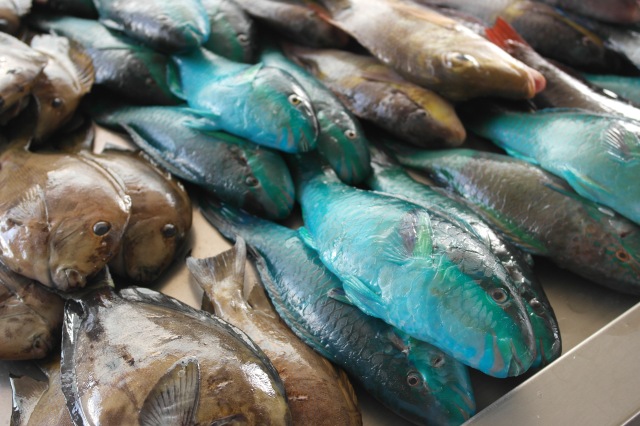 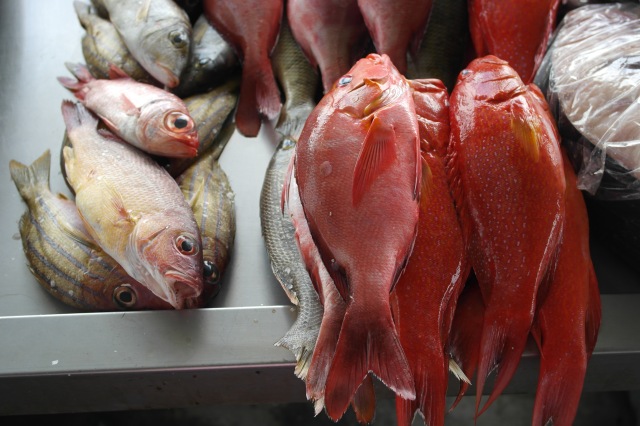 I met Sarah and Nick on their lunch breaks one day and we went for fish and chips. 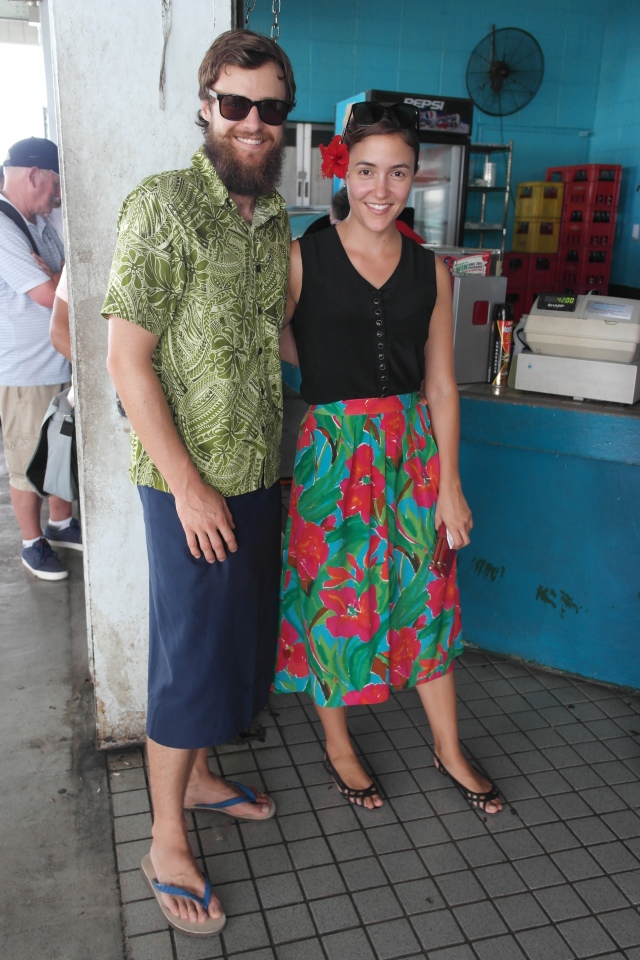 We joined the end of a long line, a testament to how good the food is, which moved quickly as piping hot fresh battered fish and chips were dished up to the crowd. 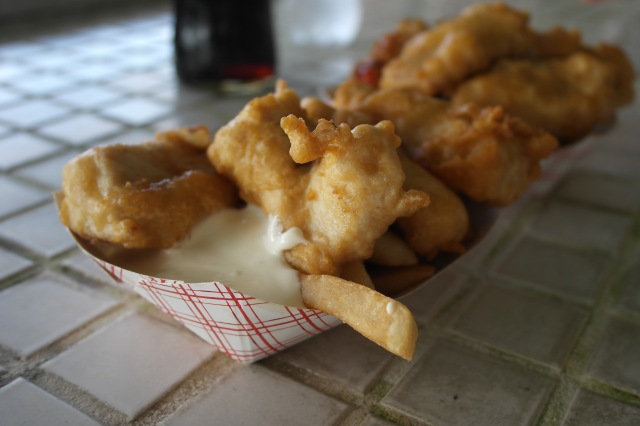 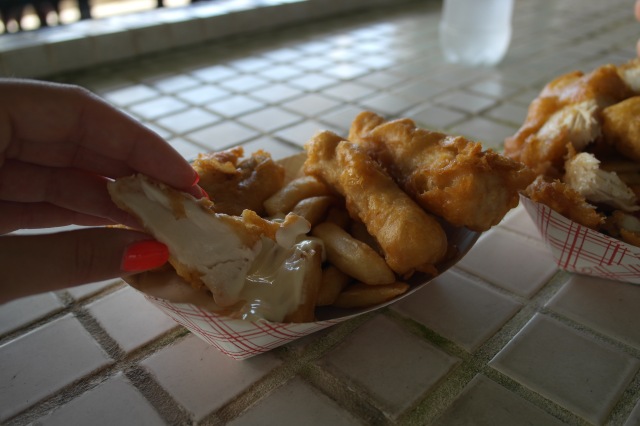 Washed down with a heavy old fashioned bottle of coke (no diet or zero here). 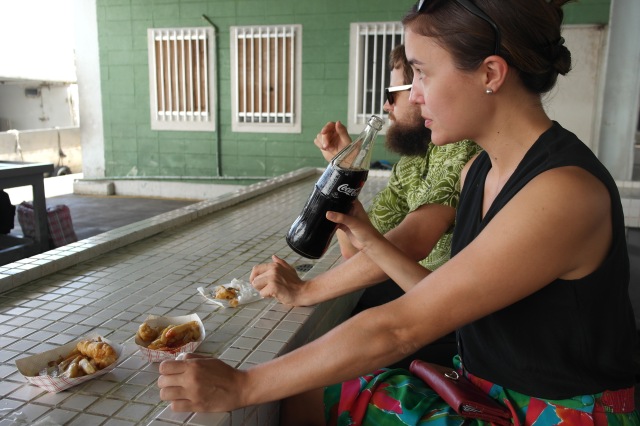 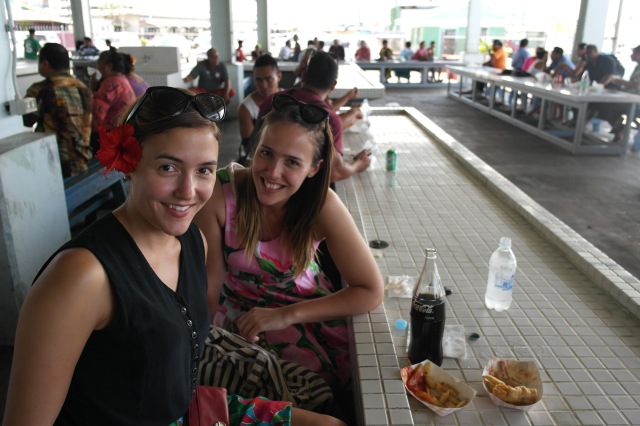 Right near both the fish market and the bus station is the flea market, which is good for all kinds of touristy souvenirs. 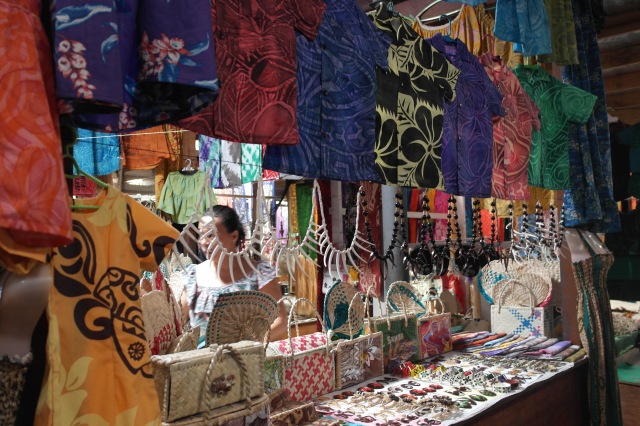 I also went to two of the most popular tourist destinations in Apia; Robert Louis Stevenson’s house and Palolo Deep Marine Reserve (great snorkelling!). Both are definitely worth a visit. 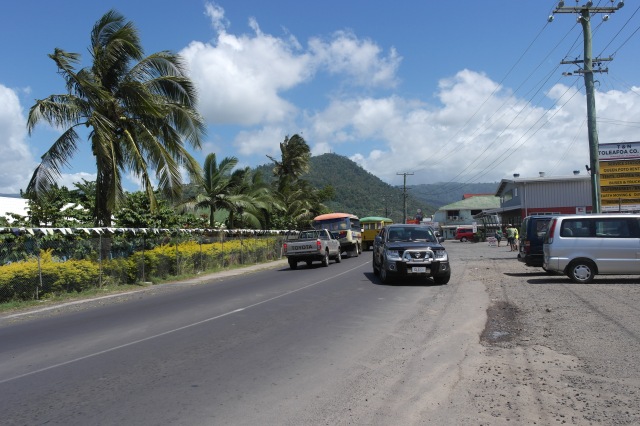 This entry was posted in Food, Travel and tagged Apia, Food, Samoa, Samoa Travel Blog, Things to do, Travel. Bookmark the permalink.

8 Responses to Around Apia