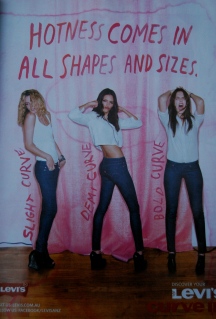 When I first saw this advertisement in Cleo magazine I immediately scanned the ground for the 3D glasses I assumed had tumbled out which would enable me to see said ‘slight’, ‘demi’ and ‘bold’ curves. But alas, my naked eye was meant to detect curves without the assistance of stereoscopy.

Seriously? That’s a ‘bold’ curve?! My issue here is not with the use (or non-use) of plus sized models. My issue is with lies. Straight out lies. Advertising has lied to women in particular since its inception. Mascara advertisement lies are my favourite: ‘instantly build 8x more volume without clumping!’ and ‘helps to lift and separate lashes to provide the look of 300% more lashes’ says Maybelline. 300%?! Who came up with that?!

To the Don Drapers of the world: please stop insulting my intelligence. I know that ‘active enzymes’ can’t ‘seek out stains in the wash’ and that there is no such thing as ‘lipgloss with 5x more shine than patent leather’. I’ll cut you a deal Don, you stop pretending I can’t sort fact from fiction and I’ll pretend your name isn’t actually Dick. Ok?