Safari in the Serengeti National Park

Sure as Kilimanjaro rises like Olympus above the Serengeti… Naturally I had Toto’s Africa stuck in my head as we drove through dust towards the entrance to Serengeti National Park. In fact we actually made our safari guide Hans blast it through the stereo as we sang along at the top of our lungs, trying to hit Toto’s signature high notes. So predictably lame! When we made it to the gate the dust was unlike anything I’d ever experienced. So bad I didn’t even get out of the car to take a proper front-on photo of the sign:

The Masai people are completely unfazed by the dustbowl conditions:

It was quite amazing seeing Masai people living traditionally on the land, especially the young men who had recently come of age in their feathers, black dress and jaw-dropping face paint. I tried not to take many photos, it didn’t feel right.

We stopped on the way in to assist with a broken down Land Cruiser, which was reassuring that others would do the same for us if we were caught out. A while later down the road, we spotted our first lions of the day:

A male lion and his harem of sleepy lionesses. Zero prizes for guessing how they get so fatigued!

We watched for a while, it still amazes me how unfazed they are by all the humans crammed into large vehicles watching them. 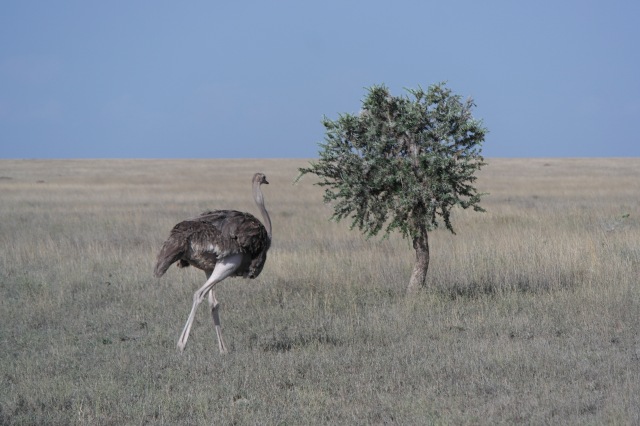 We saw our first and only cheetahs of the trip, just hanging out on a mound: 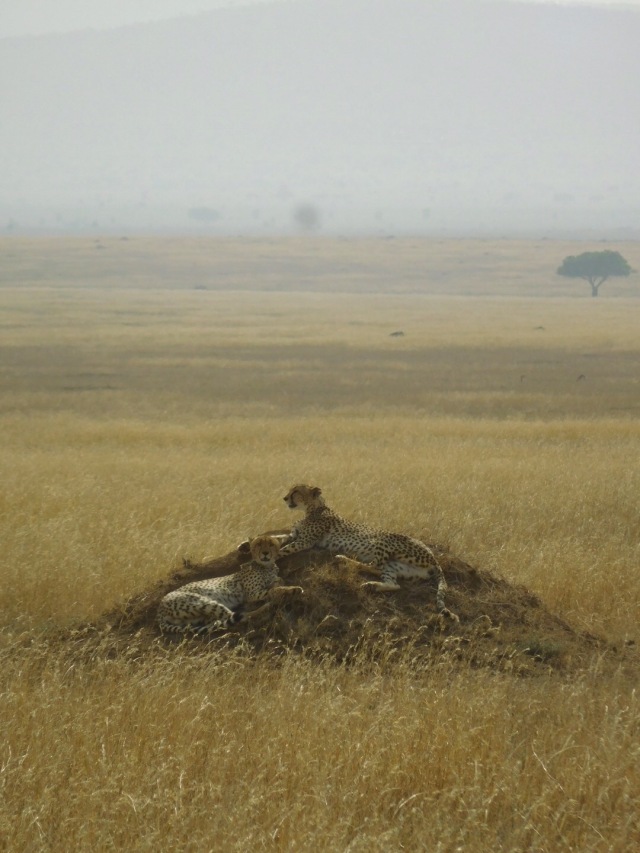 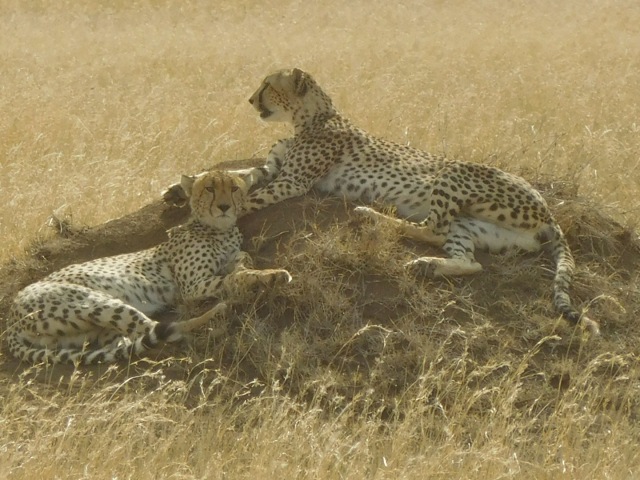 They’re under the tree, I ain’t lion

We caught a tiny glimpse of the tail of a leopard in a tree, but I don’t feel like that really counts! They are notoriously hard to spot 😉 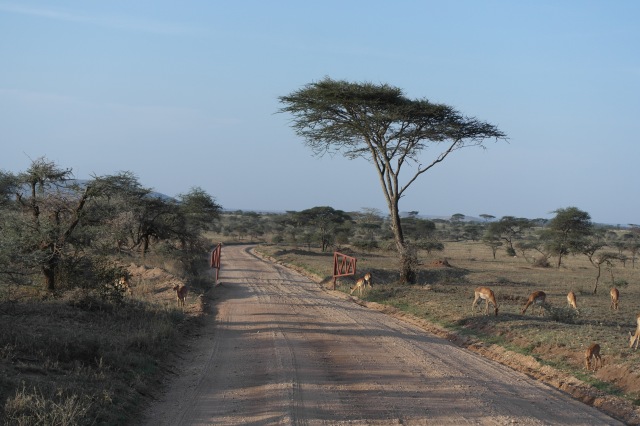 On our way out of the park

On our way to our campsite we saw more of those beautiful weirdos known as giraffes. 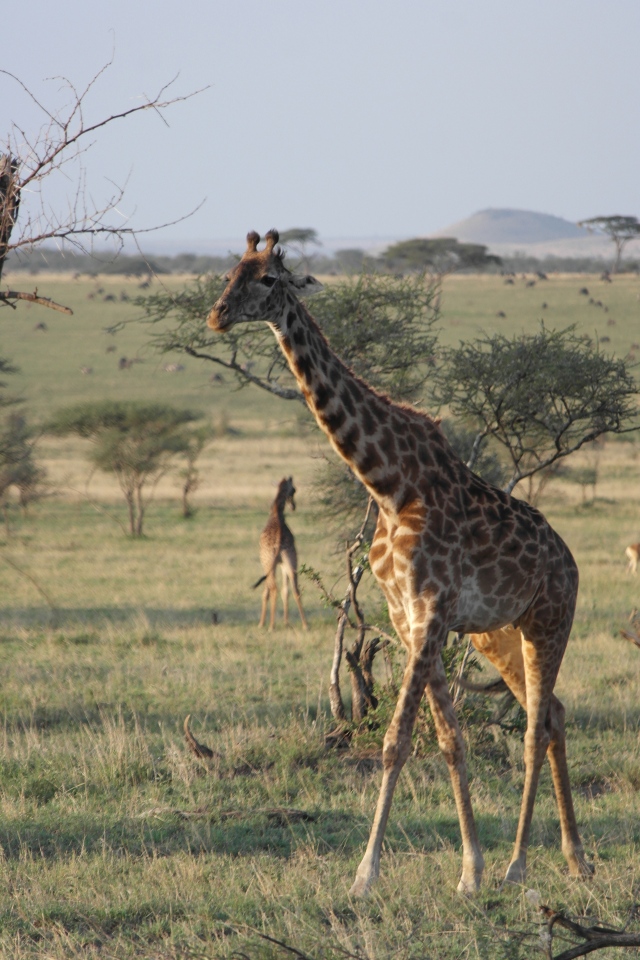 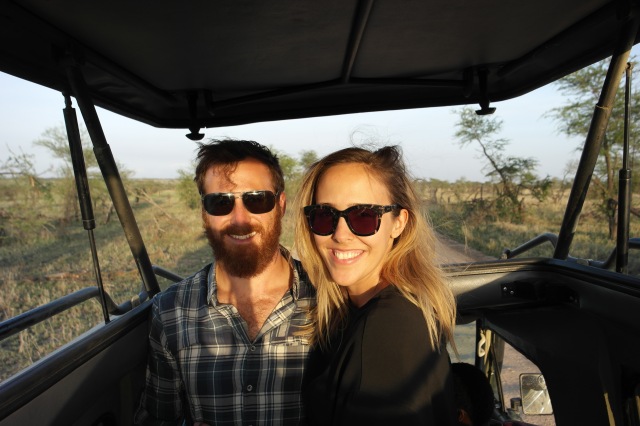 We got to our campsite and just set up our tents just before darkness fell. 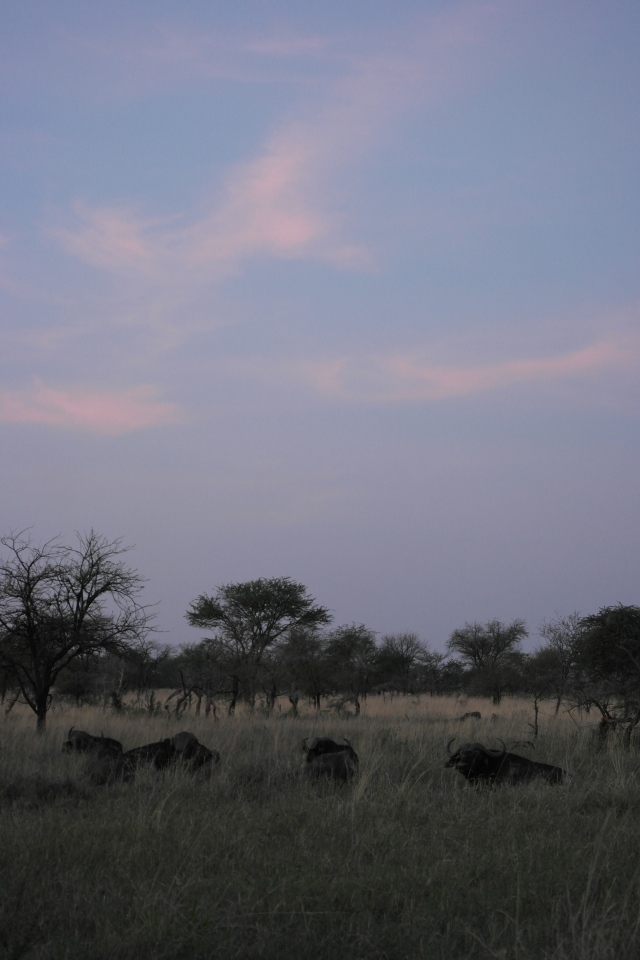 Oh just some buffalo sleeping nearby

As I was brushing my teeth next to my tent I saw these eyes light up in the beam of my torch and couldn’t work out who they belonged to. They were very far apart, so I knew the animal was too big to be a lion. Another pair of eyes appeared and it turned out they were two huge, lumbering buffalo. We fell asleep to the sound of hyenas.

The next morning we rose early, threw on our warmest clothes and sped towards the impending sunrise.

We caught it just in time and were then joined by a family of breakfasting elephants:

This guy was less than impressed we’d turned up uninvited:

He ran towards us (I wouldn’t say charged), trumpeting loudly and lifting his tusks. You can watch the video of it here. 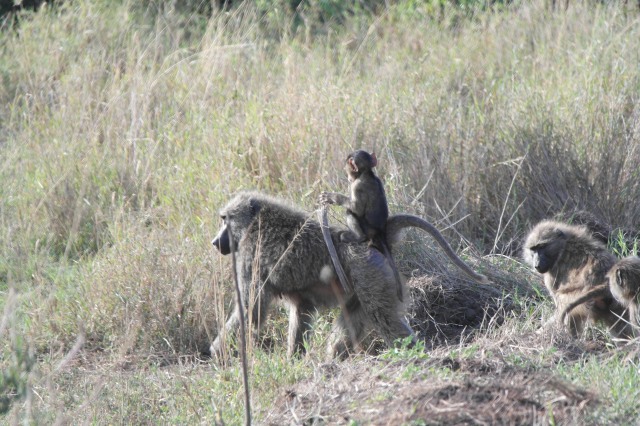 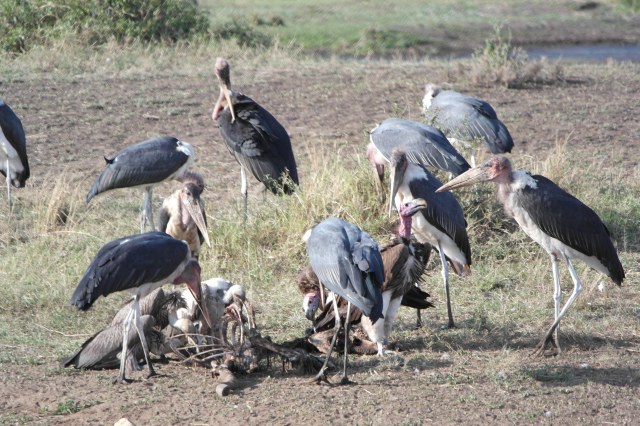 Evil congress of birds cleaning up the savannah floor

We watched these hyenas for ages, trying to figure out what meat they were guarding. Eventually they lifted up what looked to be an elephant’s trunk. 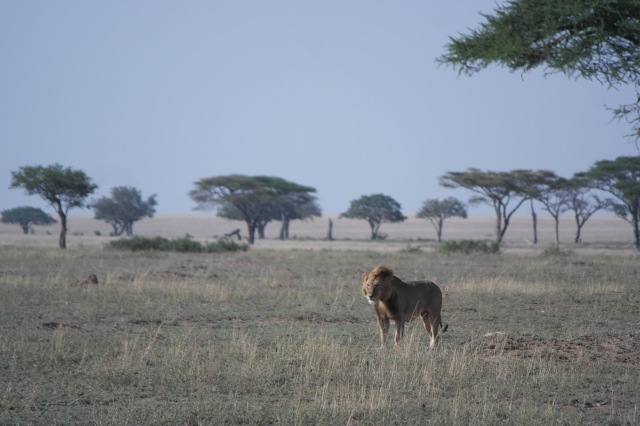 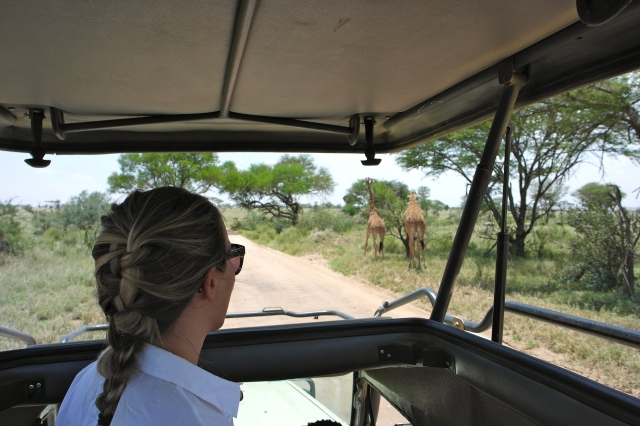 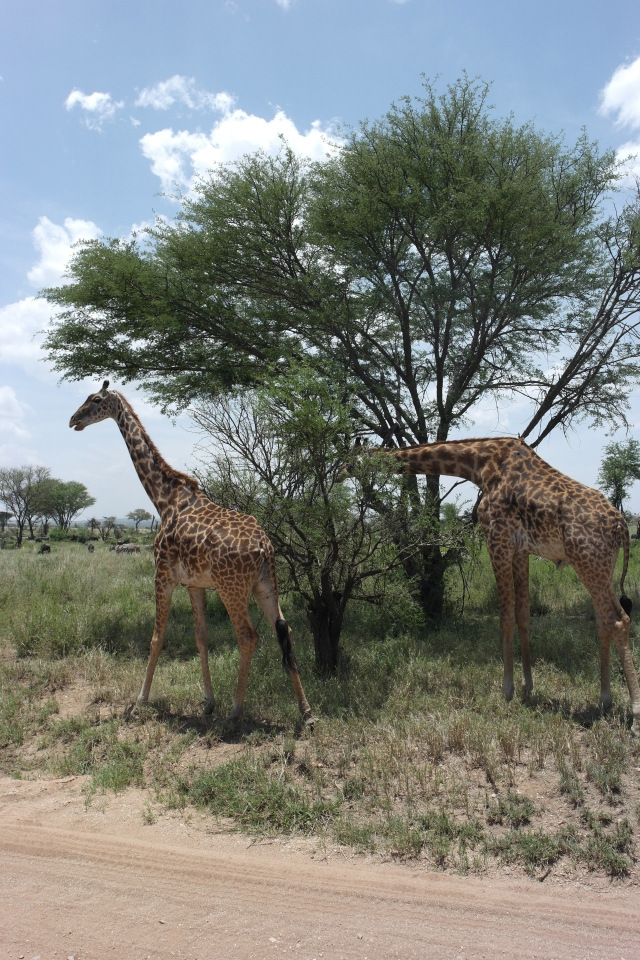 Eventually it was time to leave. On our way back to the gate Sarah spotted a lioness stalking some Thomson’s gazelle. 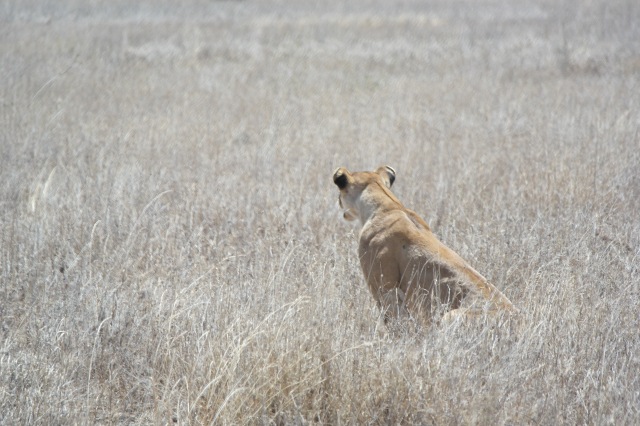 Unfortunately they got wind of her presence and sped off. We kept watching which is lucky because what happened next was delightful. She went to pick up the kids! Presumably in the spot she left them while she tried to organise dinner. The four of them then walked right past our Land Cruiser. 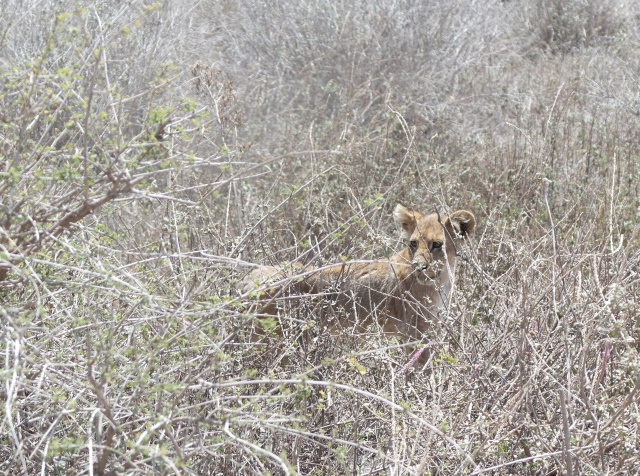 It was absolutely the highlight of the day. 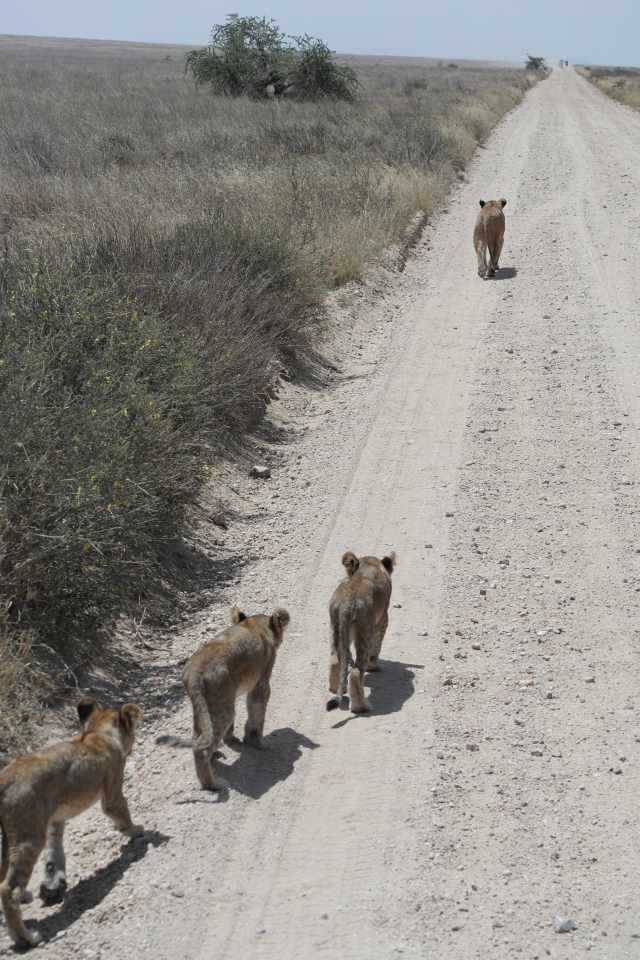 And we have Sarah to thank! 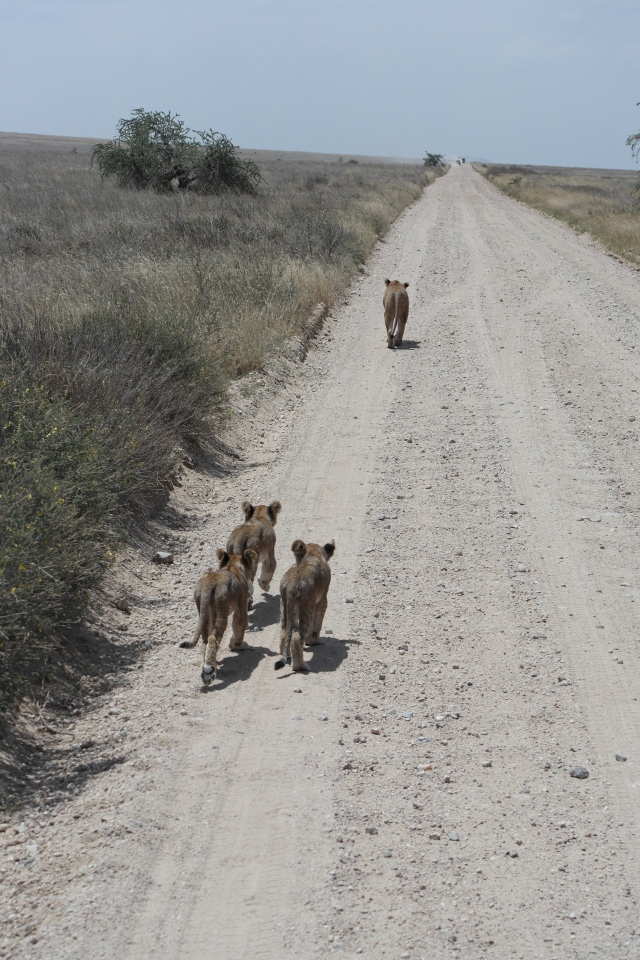 They were the tiniest cubs we saw on our whole trip and it was, like all of safari, a completely chance encounter.

7 Responses to Safari in the Serengeti National Park