I love a good coincidence story, like a lot of people. This American Life (aka the greatest podcast in the world, if you aren’t already well acquainted what on earth are you doing reading this and not on their website downloading EVERYTHING?!) recently did an episode on coincidences and it was so fascinating, I found myself attempting to relay each story to Andy and failing at doing them justice. Because that’s the thing with coincidences; you always think yours is the best. You feel like you have something bizarrely wonderful and ‘small worldly’ happen but upon retelling it to others, barely manage to muster any interest.

That was my experience last week when I had, what I thought was, an incredible small world story. I mentioned, absentmindedly, to my friend at work that this time last year I was in New York City seeing Matilda the musical. To which she replied “I was in New York this time last year as well! But we saw Jersey Boys and Aladdin“. Long story short, it turns out we both saw Jersey Boys in NYC, on the same night, in the same theatre, both with our parents and partner AND scrolling back through our phones, we both took almost exactly the same photo just 13 minutes apart…!!! 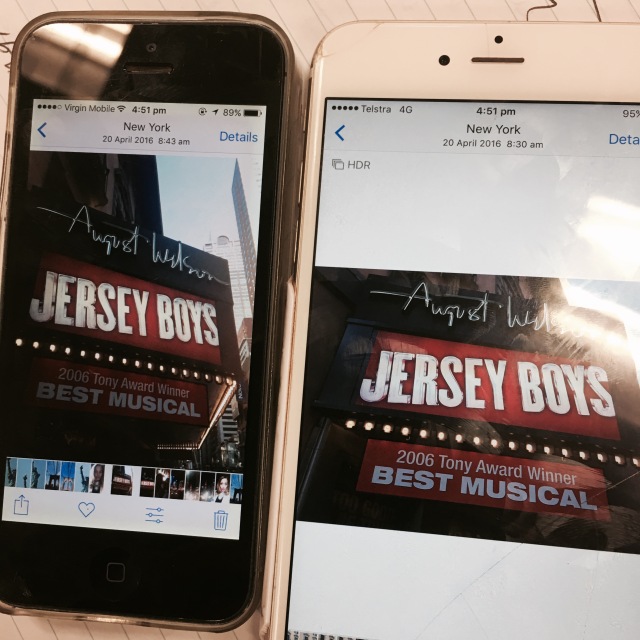 At the time, neither of us worked at our current organisation. I wasn’t even sure I’d end up back in Melbourne. Doesn’t it seem amazing that a year after seeing the same show in NYC, we are sitting on the opposite side of the world at adjacent desks?! Doesn’t it?!

Probably not. Because it’s my coincidence story, not yours. I want to hear yours and I’ll let you know how it rates to an outsider. Go on!

This entry was posted in Misc, Social Commentary and tagged Coincidences, Musical, NYC. Bookmark the permalink.