A sisterly reunion on Crete: part 2

So in my last post I spoke of the gamble of going to any of Crete’s ‘hype beaches’ where you battle crowds and insane traffic to get a tiny slice of so-called heaven. Well there is one hype beach I would recommend as it was one of the most unique swimming experiences of my life and that is Stefanou beach.

The drive there is really pretty; you zoom past tiny white washed villages, dry barren landscape and goats. Lots of goats.

Goats? Church? Water in the distance? Yep, you’re in Greece

You wind your way down terrifying switch-backs, park the car, then begin the descent down a rocky cliff: 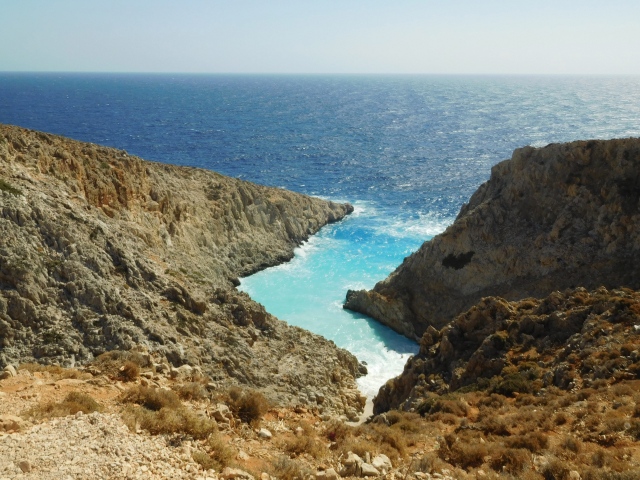 The Harry Potter scar of beaches

It’s only when you get to beach level that you fully appreciate the force of the waves, bouncing off the gorge walls then crashing ferociously at the shoreline.

It took me a few goes to fully get into the water (I’m usually a total fish!) because you kind of have to get past the crashing waves and into the deep, churning water to avoid getting violently dumped. 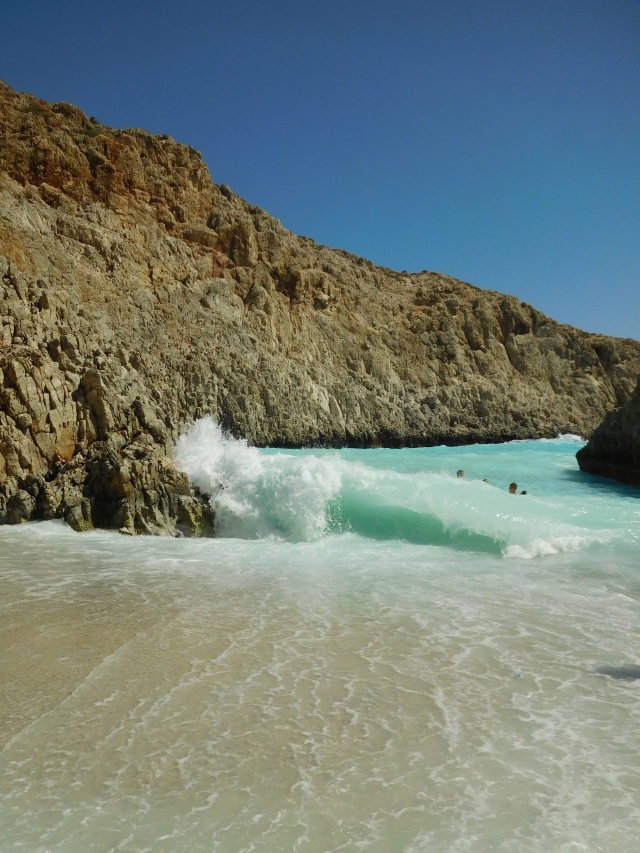 Those people are in the safe zone. This photo is deceptive; that wave is as tall as me (TALL)

When you’re in the deep water you have zero control over where you go, it’s like being in a human soup with an invisible giant stirring the pot. You want to avoid the left side, where the epic waves crash, and the right side where people are smack-landing into the water having jumped from a rock.

So basically not the most relaxing swimming scenario! But super fun. I was amazed at how many people just ran blindly into the waves, only to be spectacularly dumped and then wiped out by a second wave (see a 10 second video I took here!).

There is only a tiny smidge of beach to sit on at Stefanou, so by mid afternoon it’s basically impossible to work your way through the patchwork of towels and umbrellas to the water. Time to leave!

Amazing how the later sunlight changes the colour of the water

By that point we were outrageously hungry, so stopped on the way home for gyros and tzatziki. Slight overkill. 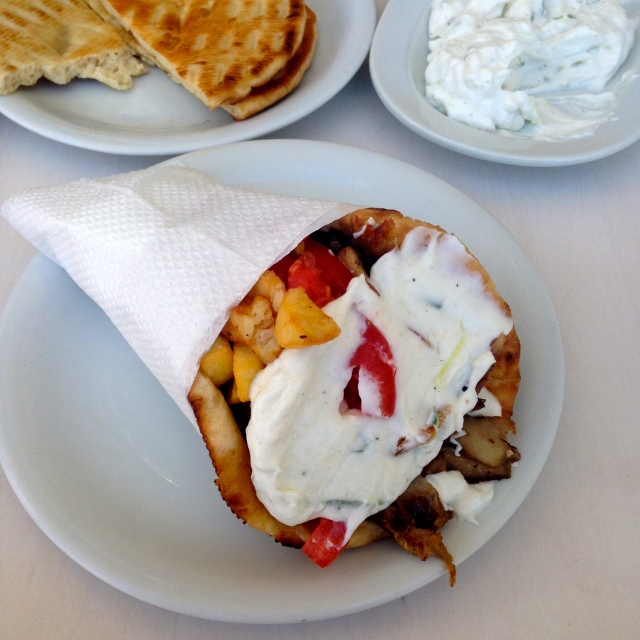 That evening we explored Chania at golden hour.

We strolled along the old port, politely rebuffing every pushy restaurant spruiker along the waterfront. 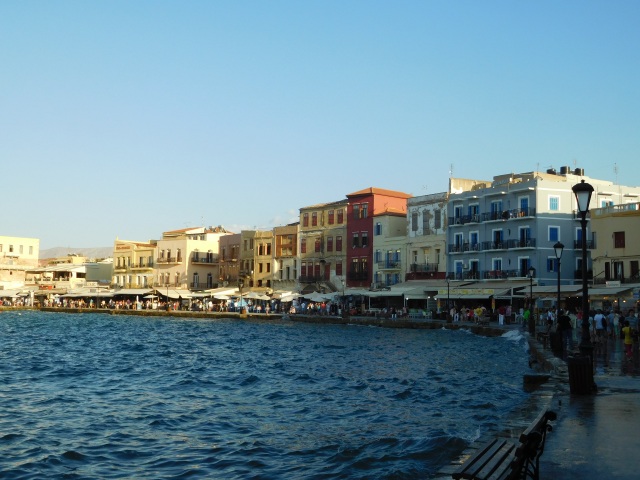 There is an incredible labyrinth of tiny streets lined with beautiful old crooked buildings and creeping bougainvillia. 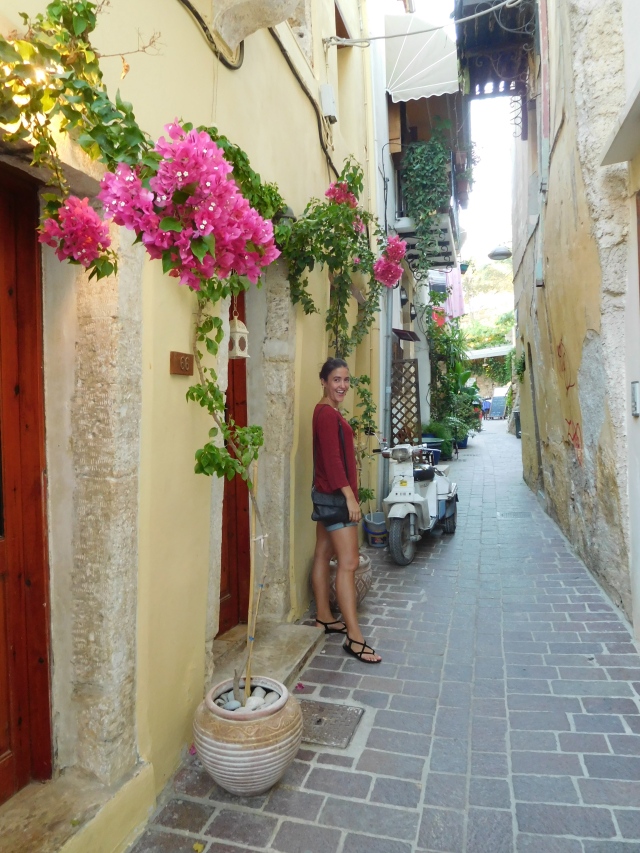 I stared longingly at the shops filled with beautiful leather sandals and hand-crafted jewellery. Damn budget.

We went to another pretty lacklustre touristy restaurant and while the service we received wasn’t too bad, we watched in dismay as people around us walked out having waited half an hour without even seeing a menu. 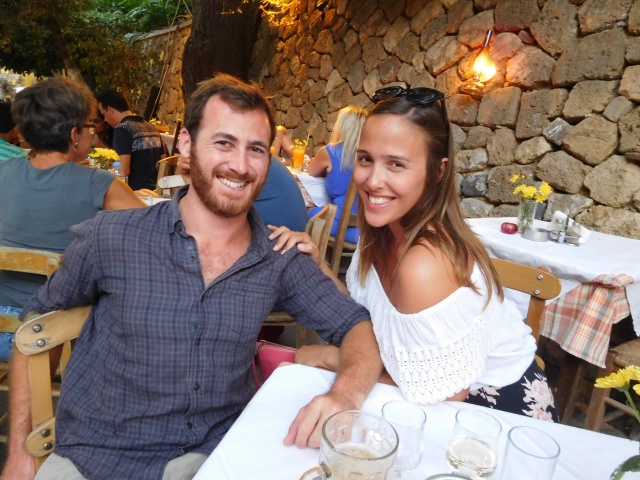 The following day Sarah and I drove out to Phalasarna (aka Falasarna) beach on Crete’s west coast. 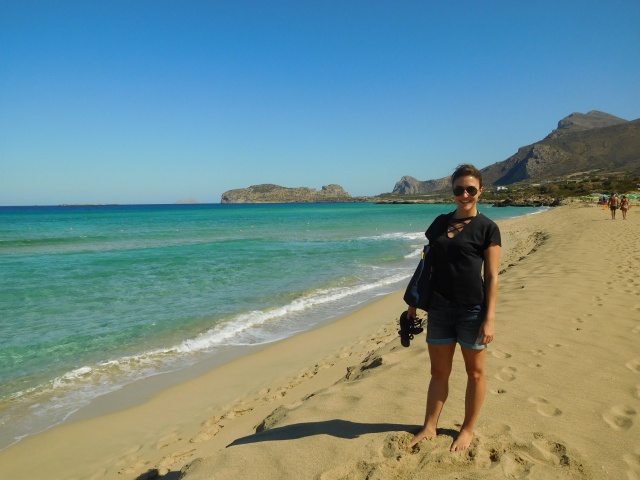 In terms of size, soft sand and beautifully blue, deep water it was probably the perfect beach. But it was blowing an absolute gale! Still, I loved it.

The snorkelling was pretty decent too.

Once we got sick of being whipped with sand we drove back up the hill to a cafe overlooking the olive groves that populate the land behind Falasarna beach. 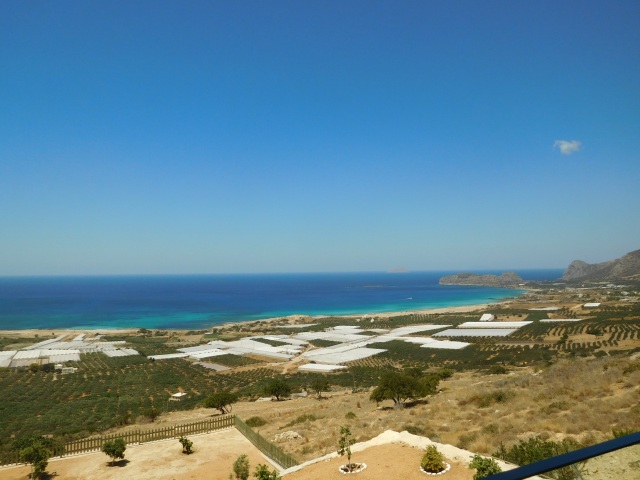 True to form, we ordered a selection of appetisers and were delighted to discover two new dishes; dakos and grilled feta. 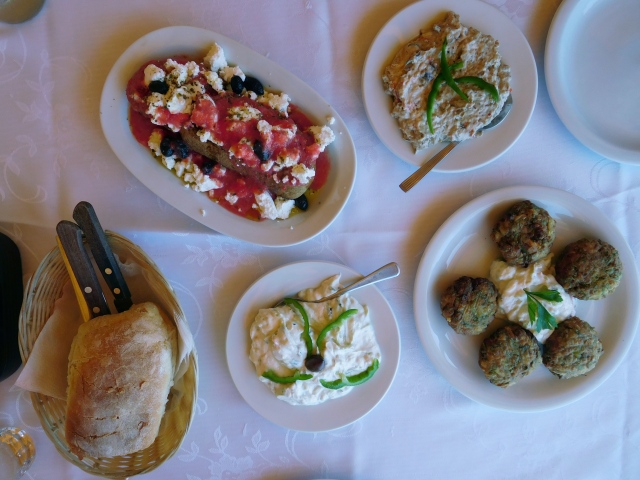 Dakos is the red dish on the left. Grilled feta not pictured

Dakos is the Greek answer to bruschetta only far more delicious! It consists of rusk bread topped with tomatoes or a tomato jus, feta, olives and herbs. Grilled feta is as obvious and delicious as it sounds.

We caught the sunset in Chania that night.

We ate at Chrisostomos in Chania that night. It was absolutely outstanding and probably the only meal I didn’t photograph! I think I was probably just so relieved to be there (it was really hard to find, the Google maps address was wrong and Sarah got shoddy directions off five separate people!) that I couldn’t be bothered to take photos. But still, it was easily the best meal we had on Crete. They give you free loukoumades (Greek donuts) for dessert; enough said!

On our last day with my sister we hiked the 16.7km Samaria Gorge. It’s meant to be the longest gorge in Europe. I had mixed feelings about the hike; knowing that it was mostly downhill and what my crappy knees are like.

The drive there through the hills was really pretty. 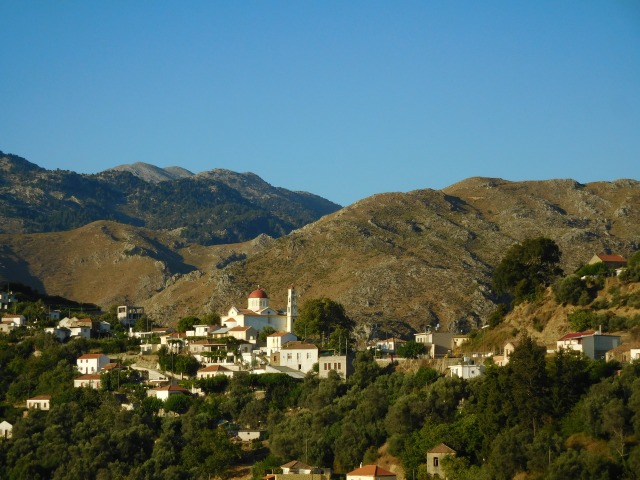 We set off at about 8:30am and were certainly not alone. Once we got past many of the stragglers in inappropriate footwear it was beautiful. Reminded me a lot of Yosemite National Park in California. 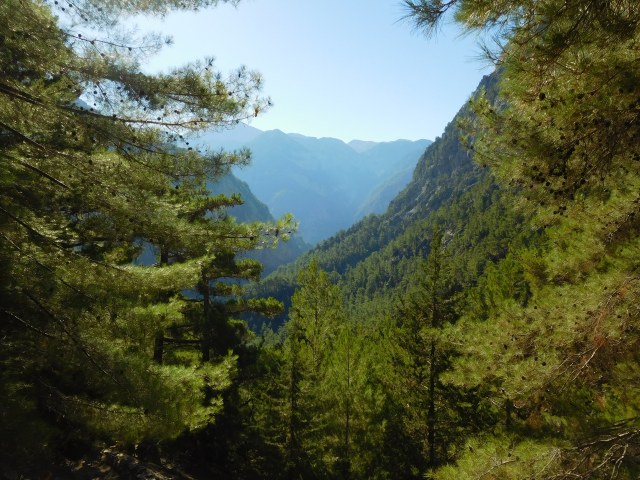 My dad reckons he did the hike in 2.5 hours 35 years ago, so my sister and I decided we’d better try to beat that. Hence running intervals began. 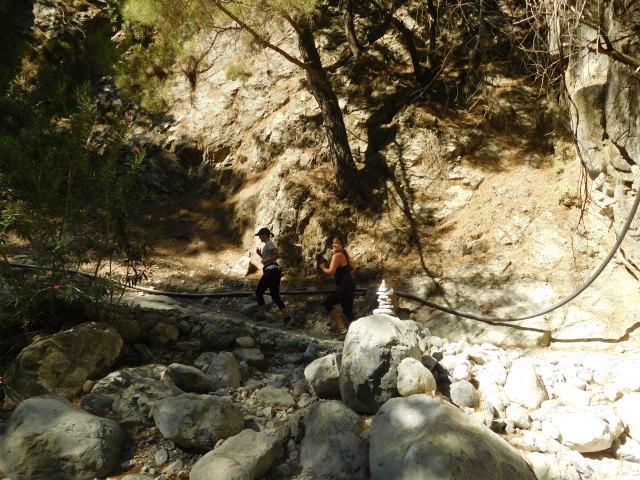 Proof of the running 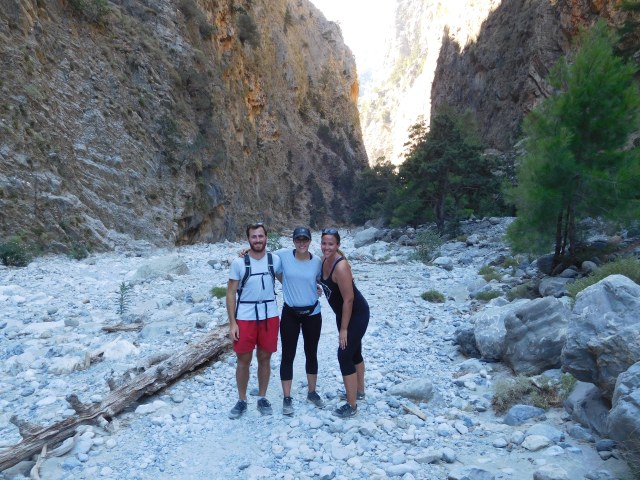 We got to Agia Roumeli (the end of the gorge) at 1pm and it was only then that we learnt there is only one return boat, which connects you to a bus back to the trail head, at 5:30pm. I was pretty upset at first, as it was my last day with Sarah and I wanted to show her this awesome beach on the north coast we had found before she arrived. But we had absolutely no options so placated ourselves with beer, gyros and ice cream:

The water at Agia Roumeli is absolutely breathtaking. Probably the clearest we’d seen all week. 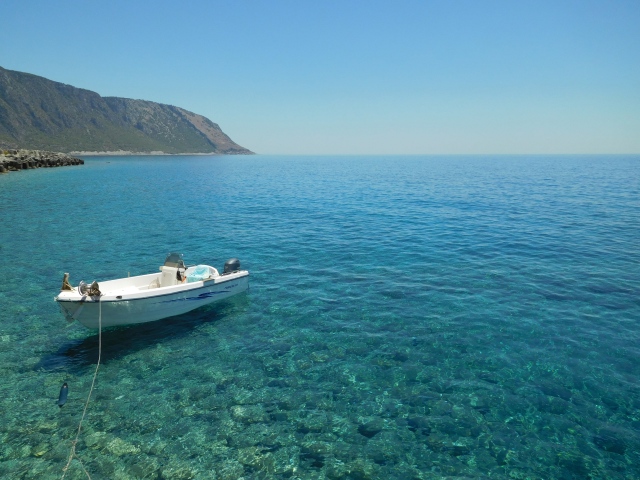 Don’t you want to just jump in?

It was such an amazing swim after a long hike. 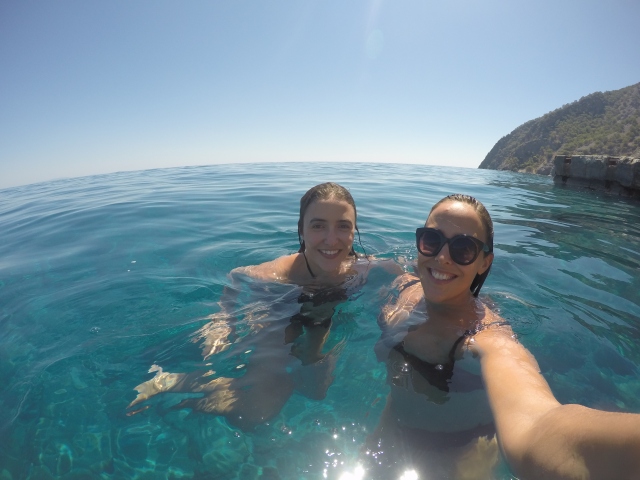 We had a snooze after our swim and soon enough it was time to get on the boat. 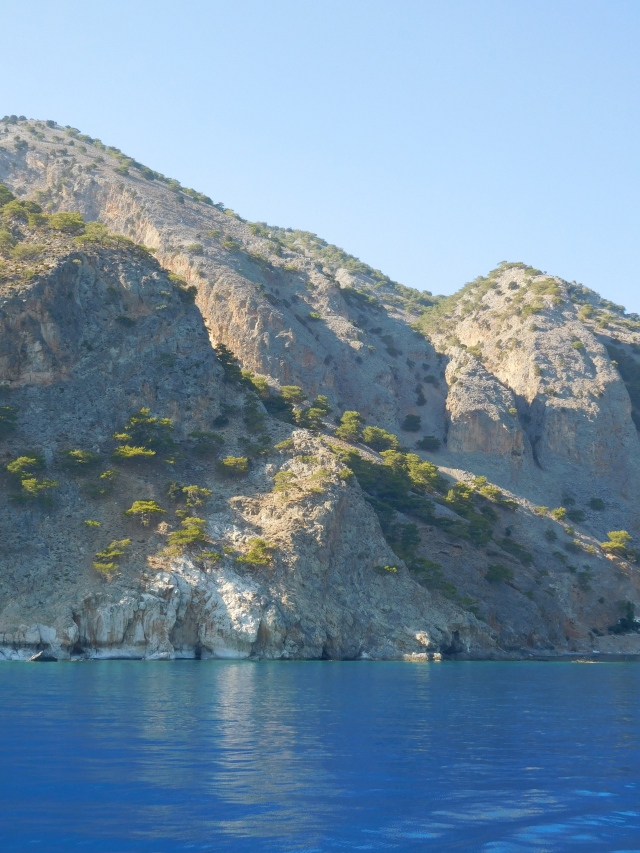 After the boat we got on a bus for an hour, then it was another two hours back to Heraklion. With dinner thrown in we got back at after midnight and then had to wake the next morning at 5am to take Sarah to the airport. Thankfully Andrew did a run to the supermarket to buy water and five packets of vac-packed olives for Sarah to take home to Africa. Champ!

Due to our fatigue it was a fairly unemotional farewell at the airport. It wasn’t until later, in a crappy dorm room in Santorini that I felt the sadness of such an excellent week being over. I highly recommend Crete as any holiday or reunion-with-a-close-sibling destination.

Thanks Sarah and Andrew for one of the best weeks of this trip! x

7 Responses to A sisterly reunion on Crete: part 2