10 foods to try in Oaxaca, Mexico

Despite Oaxaca (‘Wa-hacka’) being kind of out of the way I knew there was no way we were going to skip the culinary capital of Mexico. See my last post for further clarification! So when we arrived I got busy researching every single dish I needed to try,  wrote everything down in a notebook and set out to find it all.

Also known as Oaxacan pizzas, tlayudas are a thin crispy tortilla often topped with a layer of refried beans (frijol), tomatoes, avocados, salsa, Mexican string cheese (quesillo) and a variation of meats (shredded chicken, chorizo or tasajo; meat that has been air, smoke or dun dried).

Tlayudas can come flat like a pizza or folded in half, like in these photos. They are huge and delicious.

Tlayuda with tasajo on top

Tamales are found all over Mexico of course, but the traditional corn husk kind are pretty important to Oaxacans, who claim to do the best. They often use one of Oaxaca’s seven mole sauces inside. You can find them on most street corners.

Pozole is also found elsewhere in Mexico, but the traditional (vegetarians turn away here) pig head kind can be found on the side of the taco carts that sit outside the Benito Juarez market in town. Pozole means ‘hominy’ (which are dried maize kernels) and is made with hominy, meat and seasoned with chile peppers, onion, radishes, limes, avocados, cabbage and salsa. It was tangy and so delicious and one of my favourite dishes.

Tejate is a traditional Oaxacan drink made from fermented cacao beans, maize flower, ground mamey pits (a fruit from the evergreen family) and flor de cacao, an indigenous plant of Oaxaca. It is served from big clay pots in the markets and all over Oaxaca. It’s very filling though, don’t attempt to eat and drink Tejate at the same time.

This was our very first meal (breakfast) in Oaxaca!

Enfrijoladas are essentially fried tortillas served with beans and sauce.  The key in Oaxaca is that the beans are stewed with the leaves of the local avocado plant. We had ours topped with Mexican cheese and onions, served with a empanada on the side.

Champurrado served the traditional way; in a huge bowl

Champurrado is Mexican hot chocolate made with water, Oaxacan chocolate and spiced with vanilla, cinnamon and anise. It is served with sweet bread for dunking and is entirely a meal to itself. I tried to have mine with a plate of Enfrijoladas and it was far too much. Because of the spices it almost tastes like Christmas in a cup.

A smaller vessel of champurrado, with sweet bread

Mmmm bugs in a bag

Roasted grasshoppers are not a novelty snack (the likes of which you’ll find in Bangkok as a tourist gimick) in Oaxaca. They are a tasty topping for tacos or tlayudas and pack a flavoursome punch when eaten alone. Worth trying but you probably won’t finish an entire bag; we gave the rest of ours to the hostel receptionist.

How many can you do?

These tasty (although not my favourite tacos) morsels can be found at many street carts, beware the innocent looking guacamole sauce while burn your face off. 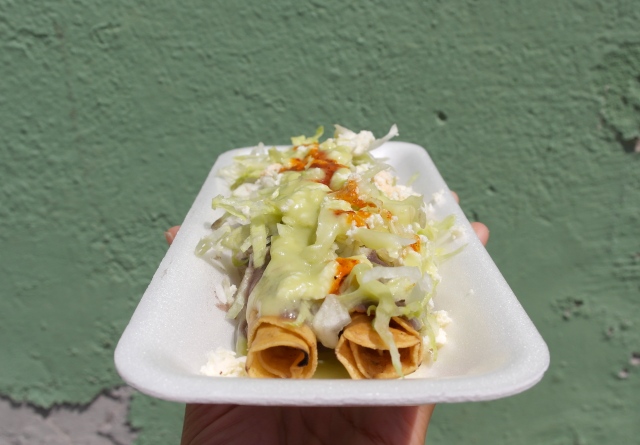 A flauta (also known as a taquito) is a crisp fried rolled tortilla stuffed with a meat or cheese, topped with refried beans, lettuce, guacamole and Mexican cheese.

My tres leches ice cream in the front

Oh how I wish we’d discovered this earlier. The ice cream stalls inside the Benito Juarez market are incredible. They make their own with local flavours including mezcal (a local spirit kind of like tequila), maracuya fruit and tuna, which is also a fruit and not a fish. 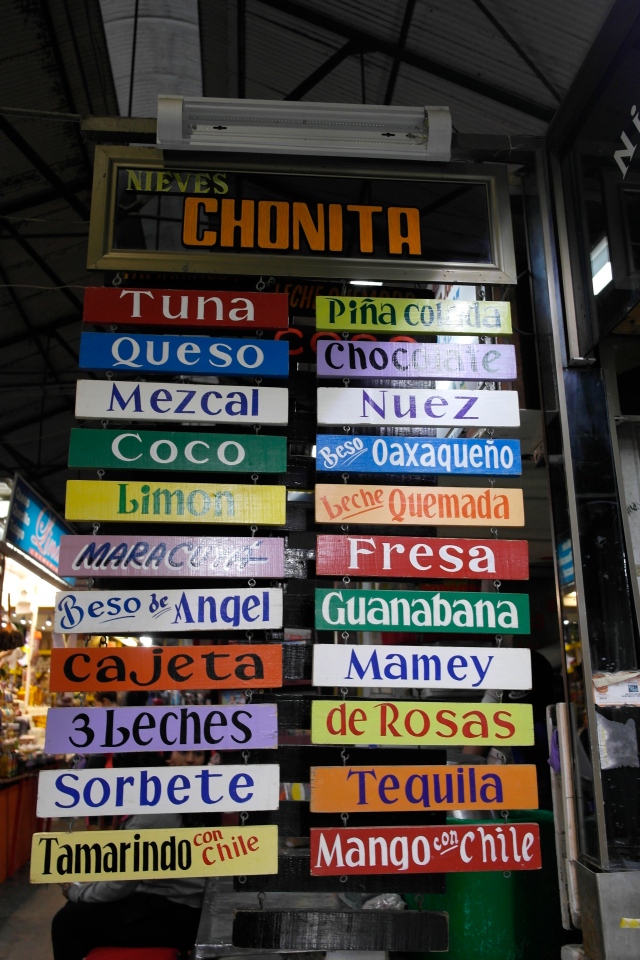 I should probably mention that all these amazing dishes and drinks were dirt cheap. It may have been a mistake to start in Oaxaca, as the food has not been as good and cheap anywhere else. Also I didn’t come close to trying all the foods I wanted. Definitely a reason to go back right?

4 Responses to 10 foods to try in Oaxaca, Mexico