We made it to Lima in the very early hours of Friday morning and after a very long immigration line and a very long taxi ride to our hostel, fell into bed.

The next morning we set out to explore our neighbourhood; Barranco. 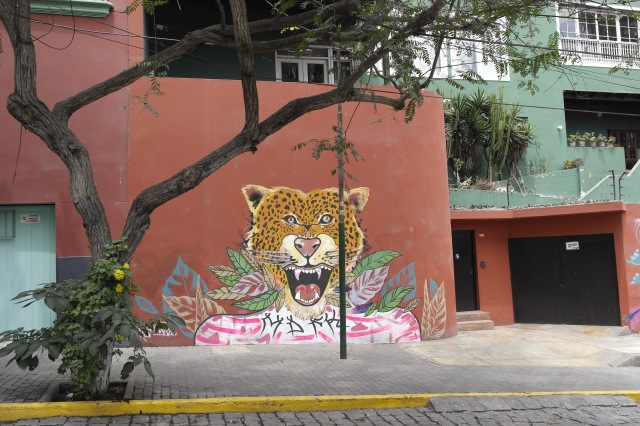 We had lunch at a place called El Muelle. As soon as we sat down our waiter brought over a bowl of salty, fried (giant!) corn kernels. They were so good and addictive, we quickly dubbed it ‘crack corn’.

Andrew decided not to test his shellfish allergy and went for beef and rice.

Which was delicious. I had two kinds of ceviche, which is raw fish cured in citrus juices.

Not a pretty photo

It was tangy and spicy and delicious.

A prettier photo, the difference an Instagram filter makes 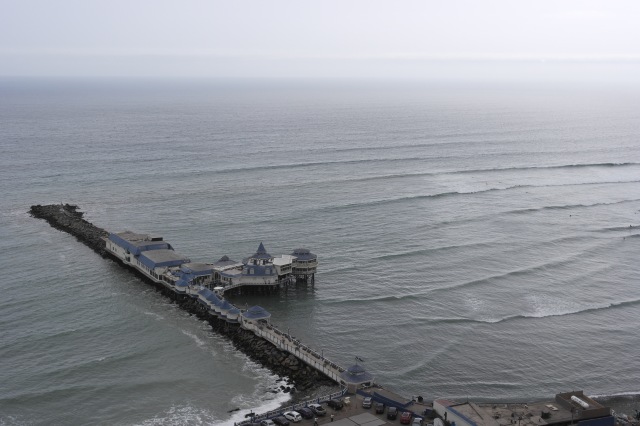 On our second day we ate in the tourist district in Miraflores, bizarrely dubbed ‘pizza street’ (it was all Peruvian restaurants?!). All the restaurants seemed to offer the same stuff, so we picked the one with pretty tablecloths.

A Pisco Sour is claimed by both Peru and Chile as their national drink. Its a combination of Pisco (local brandy), lime, simple syrup and an egg white. The first two we had were so strong it took me over an hour to finish mine!

Andrew had chicken and rice covered in a delicious coriander sauce.

It was so damn good.

We walked through Miraflores to some ancient ruins.

The Huaca Pucllana Pyramid is a complex of pre-Inca ruins dating back to 500AD. And it’s right in the middle of the city.

It’s basically a shrine to the ocean, which before the city sprung up could be seen from the pyramid.

The bricks are laid in what is now called ‘bookshelf style’, the gaps in between add flexibility for earthquakes. So clever. 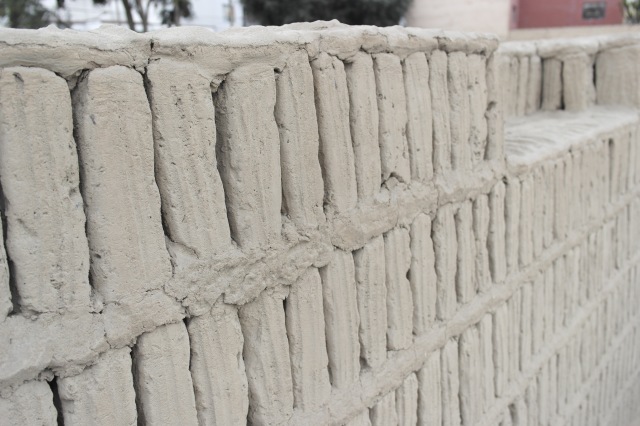 The remains of 26 young women were found in the square in front of the pyramid (see pic below), the victims of human sacrifice.

We had an nice guide who showed us around the ruins. They have gardens and animals there as they would have in the old days.

My obsession with cactuses continues

The amazing looking creation below is Suspiro de Limeña: 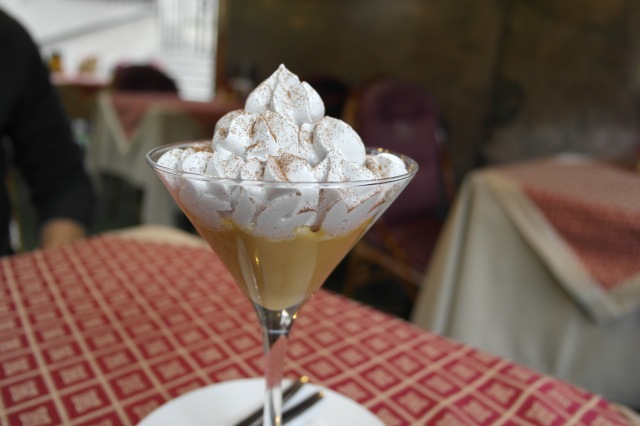 The name means ‘Lima woman’s sigh’. The bottom layer is dulche de leche (condensed milk and sugar boiled down into a thick cream) and the top is a gooey merengue. It was amazing, but sickly sweet, I’m glad we shared one!

Dinner at the hostel

Kind of a stir fry. 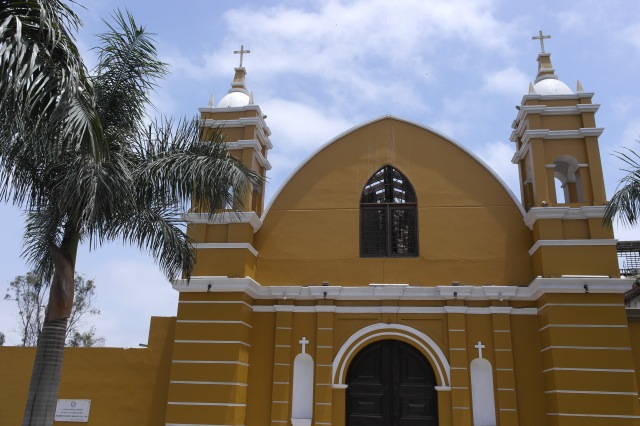 Which is destroyed at the back.

Looks can be deceiving 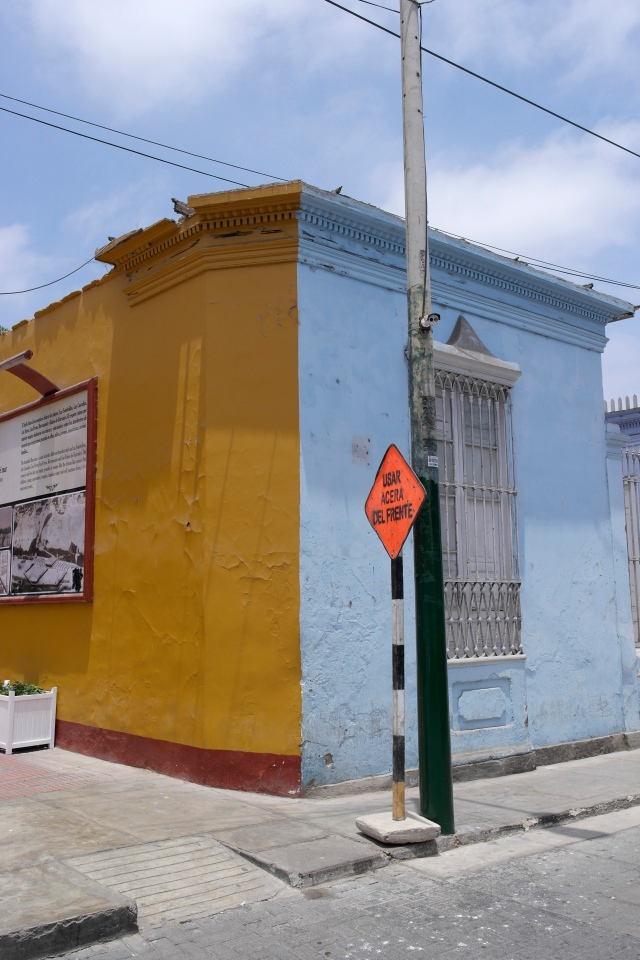 Lunch today was at Costa Sur in the Chorrillos district. 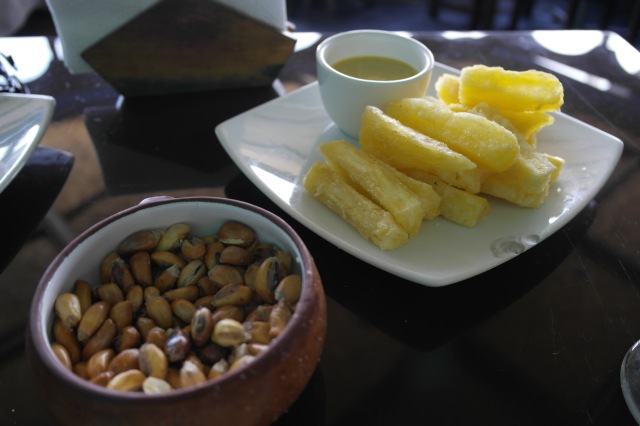 More crack corn! And some potatoes

More ceviche for me:

And some kind of fish dish for Andrew: 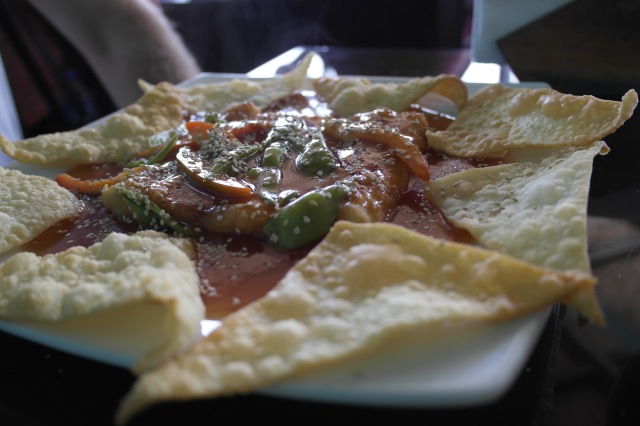 There was no English on the menu

We just had to say “no mariscos! no mariscos por favor!”. No shellfish. Andrew is allergic.

We got told to go and see a famous bridge. We thought this couldn’t be it: 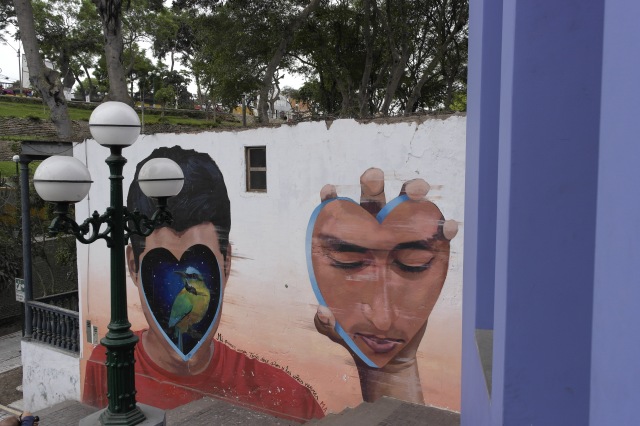 Tomorrow we fly to Cusco ahead of the Inca Trail on Friday! Hopefully altitude is kind to us.