On Wednesday I fell in love with Hearst Castle. Which is kind of odd, considering I’d only heard of it for the first time last week. William Randalf Hearst was a US newspaper magnate in the early 1900s. In 1919 he inherited more than 250,000 acres of ranch land and decided to build a house on the top of the hill as an alternative to camping” 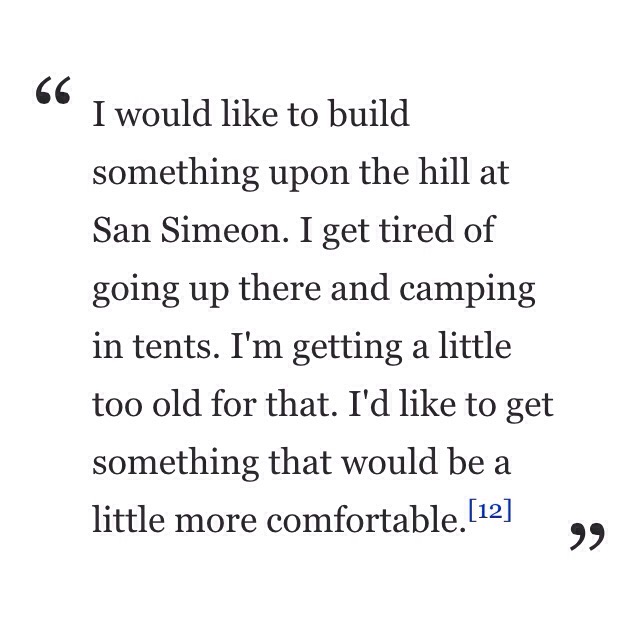 From Wikipedia, so this could be as fabricated as all Marilyn Monroe’s ‘famous’ quotes

What Hearst built with his architect Julia Morgan between 1919 and 1947 was a castle of 165 rooms, surrounded by lavish gardens, guest cottages, with an indoor and outdoor pool, a zoo (zebras can still be seen frolicking in the hills) and a tennis court.

So yeah, something a tad more comfortable than camping: 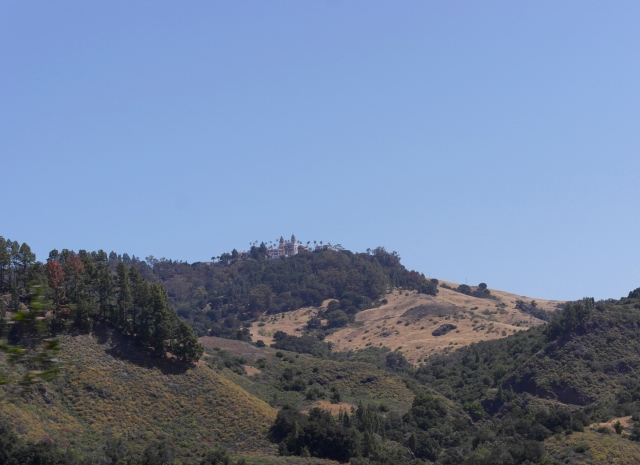 The castle on the hill

We booked a tour of the bedrooms, which took us through the guest quarters and Hearst and his mistress’ quarters. In the 1920s and 1930s, an invitation to Hearst Castle was the hottest ticket in town for Hollywood stars and politicians. We saw the room that Cary Grant stayed in. I think that’s why I loved this place so much, I was imagining vintage celebs draped over the chairs in the library or trotting down the spiral staircases to join a party in the gardens.

So here is where you’d be staying as a married couple: 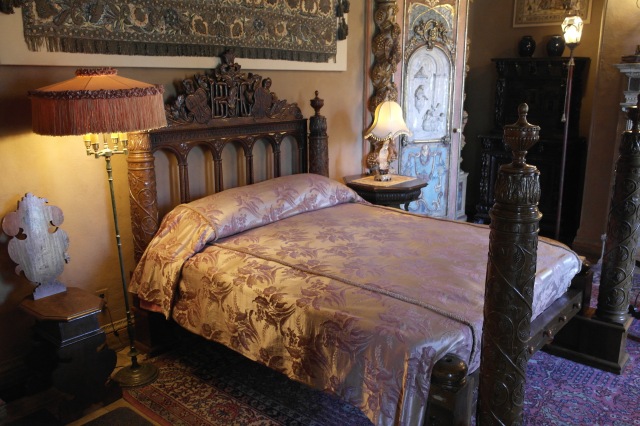 Franklin and Eleanor Roosevelt stayed here. One touch I really loved was that vintage clothes were draped over furniture in the bedrooms, as though laid out by staff for their occupying starlet or politician to slip on later. 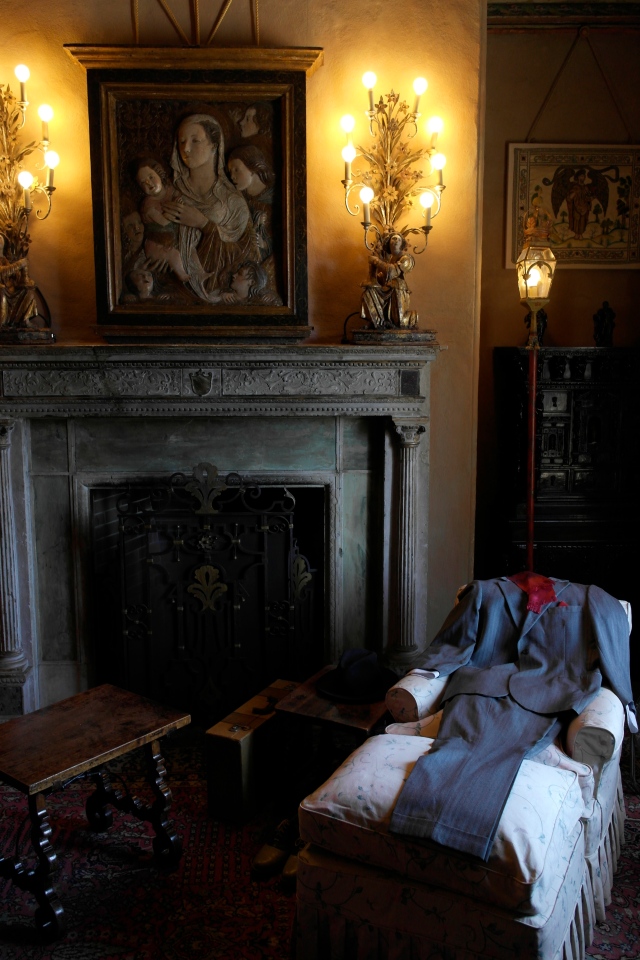 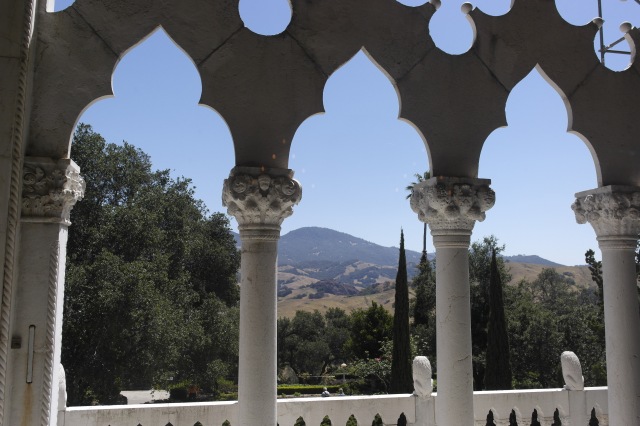 The view from the guest sitting room 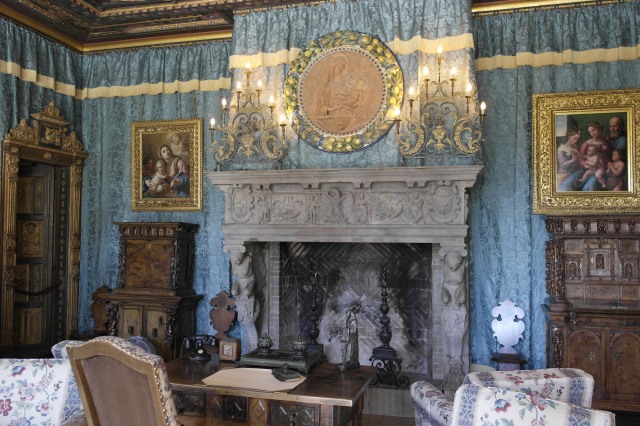 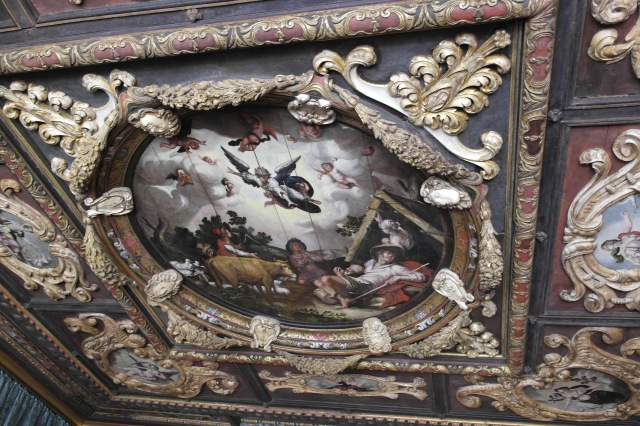 The ornate ceiling in the guest sitting room

Where a single or unmarried lady would have stayed: 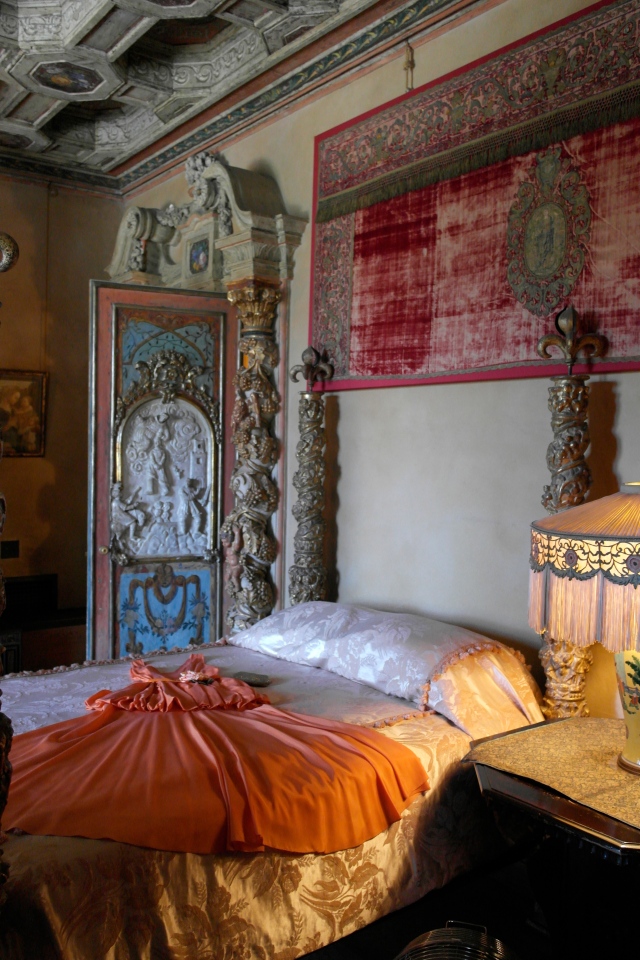 The other incredible thing about the castle is that none of the artworks or ornaments are recreations. That urn in the library that looks 1000 years old is exactly that. The sad thing is that most of these artefacts went missing/were stolen and were sold during the First and Second World Wars, so little is known about their origin. Our tour guide told us that if people can prove an item was stolen from their family or ancestors, Hearst Castle will give it back. Which has happened on a few occasions. 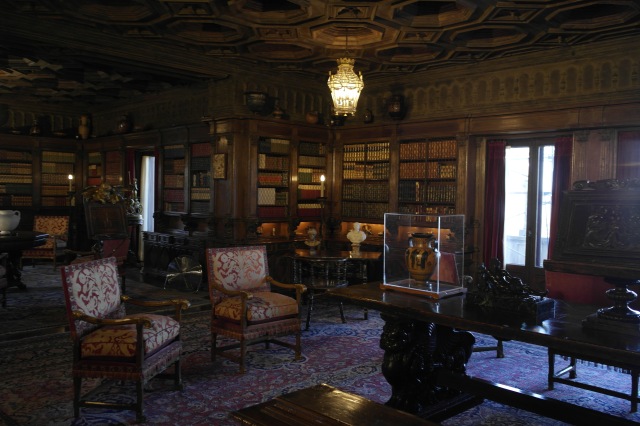 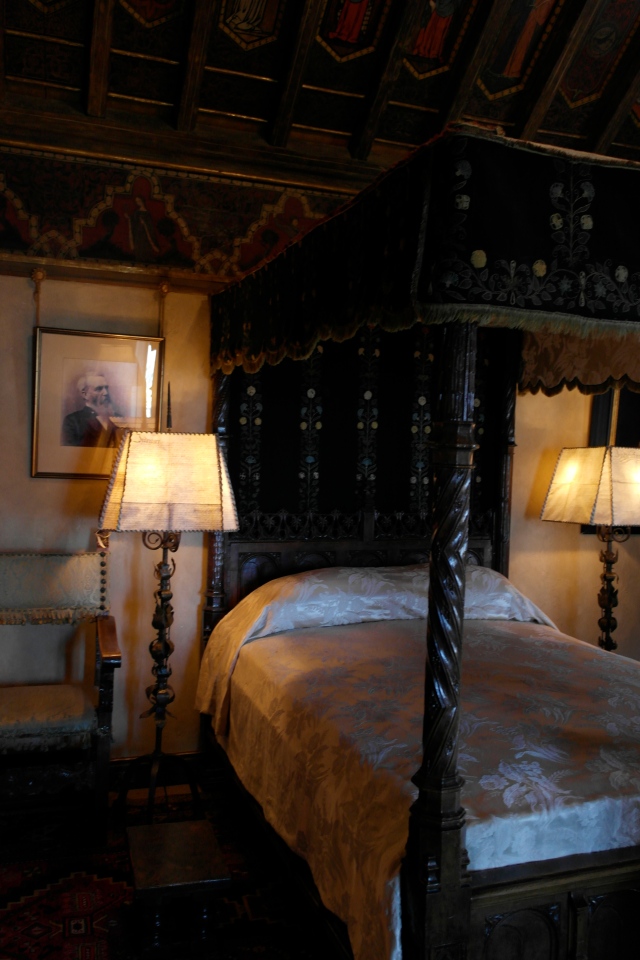 The photos were later added by California State Parks 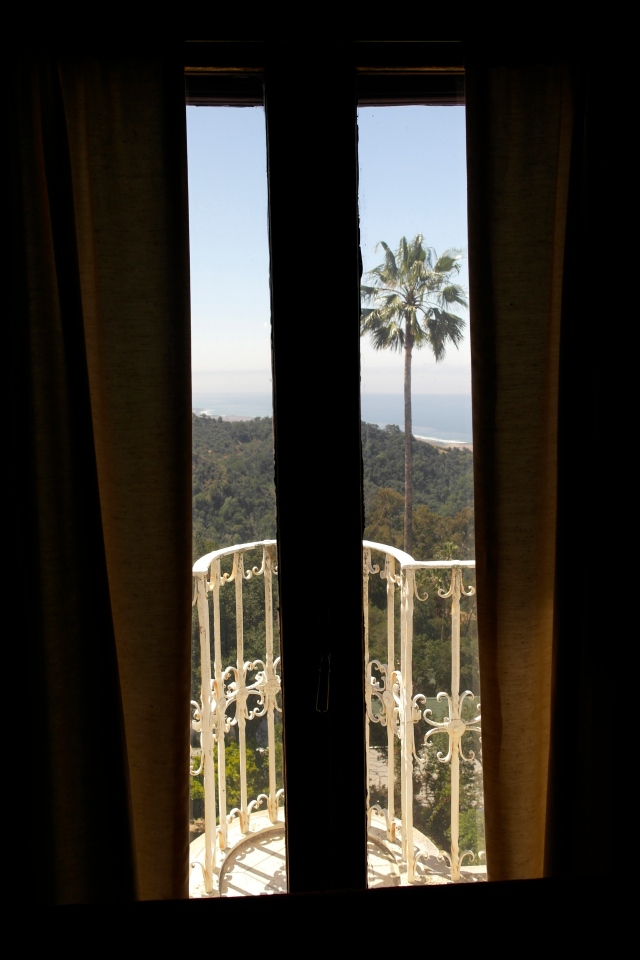 The view from Mr Hearst’s bedroom

Across the hall is the room where Mr Hearst’s mistress, actress Marion Davies, stayed. Mrs Hearst apparently stayed in New York raising the 5 Hearst sons and rarely went to California. If she did happen to make an appearance at Hearst Castle, or ‘the ranch’ as they called it, Marion would go and stay at Mr Hearst’s abode in Santa Monica. Easy! 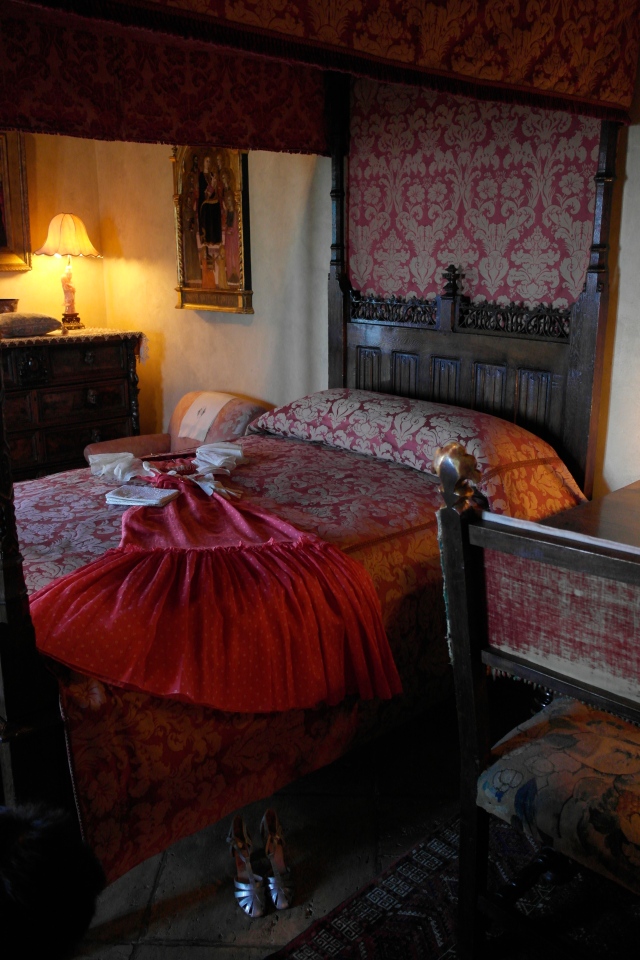 Marion’s room, the shoes under the bed! 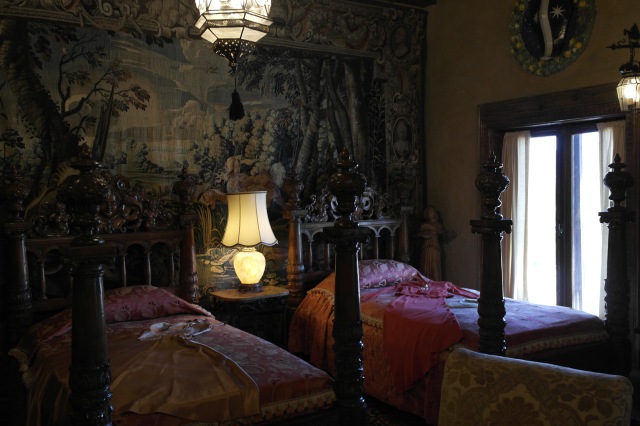 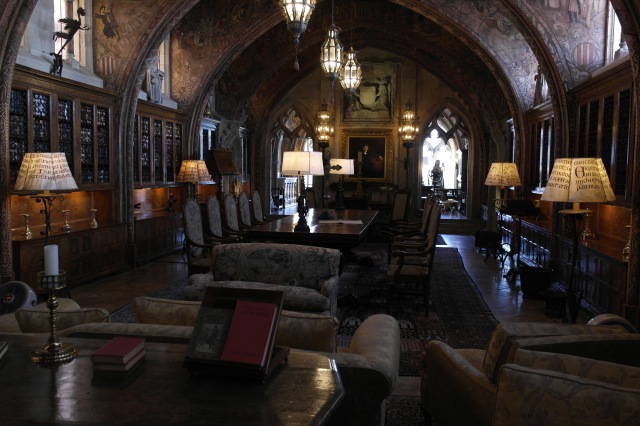 From here he ran his newspaper and movie empires

While the inside was jaw dropping, it was really the grounds of Hearst Castle that won me over. 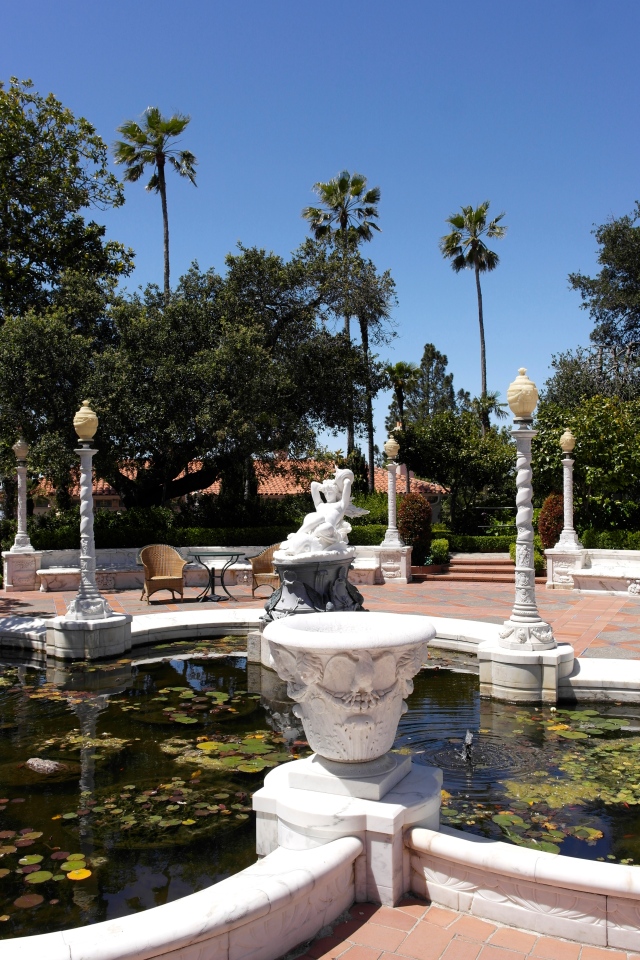 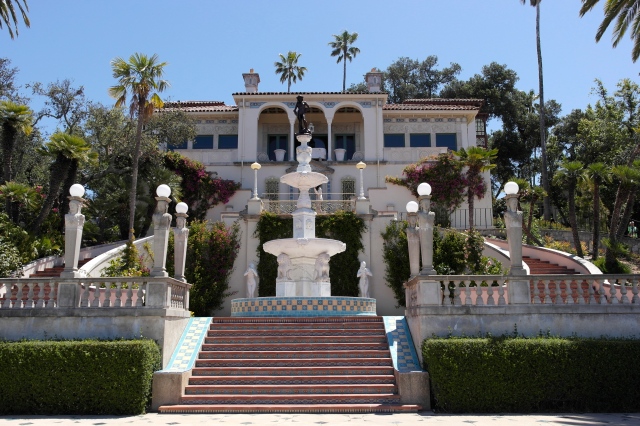 I was kind of devastated the Neptune Pool wasn’t filled was water. Apparently there is quite a large leak and with California being in a massive drought, they can’t keep it full until the leaks are repaired.

The Neptune Pool and the indoor pool are where Lady Gaga filmed a music video recently (watch it here, perhaps on silent…) and it just looks beautiful with water in it. Apparently Andrew and I are on an unplanned tour of Lady Gaga music video sets, because we’ve also been to Universal Studio where scenes for Judas were filmed. Bizarre. 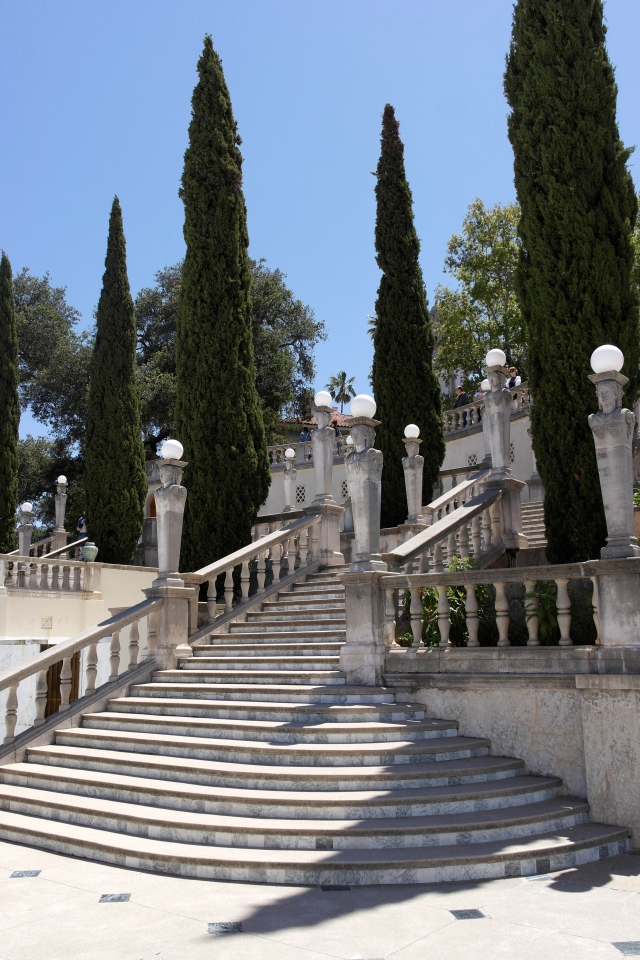 The stairs leading down to the Neptune Pool 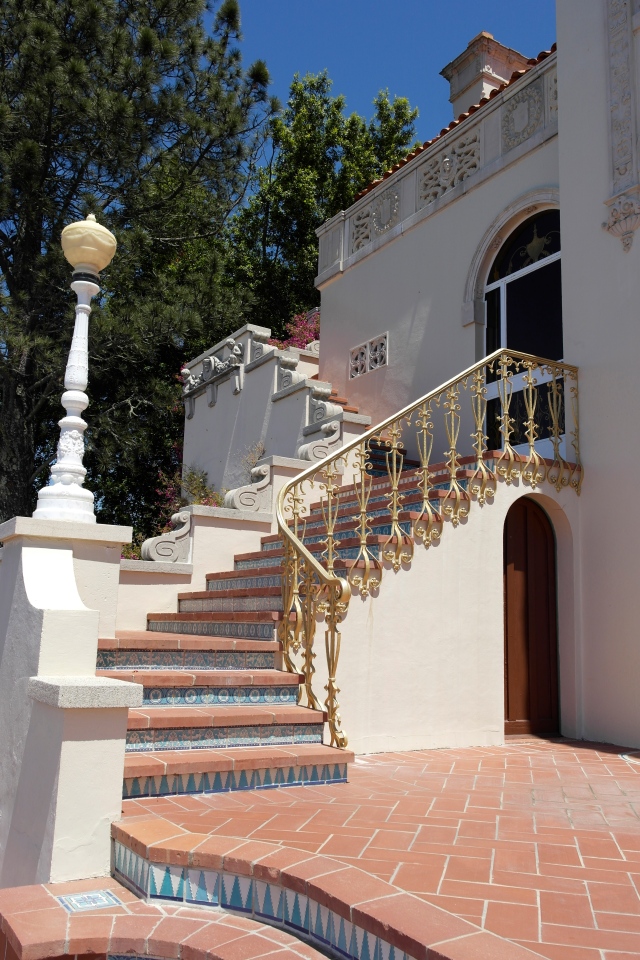 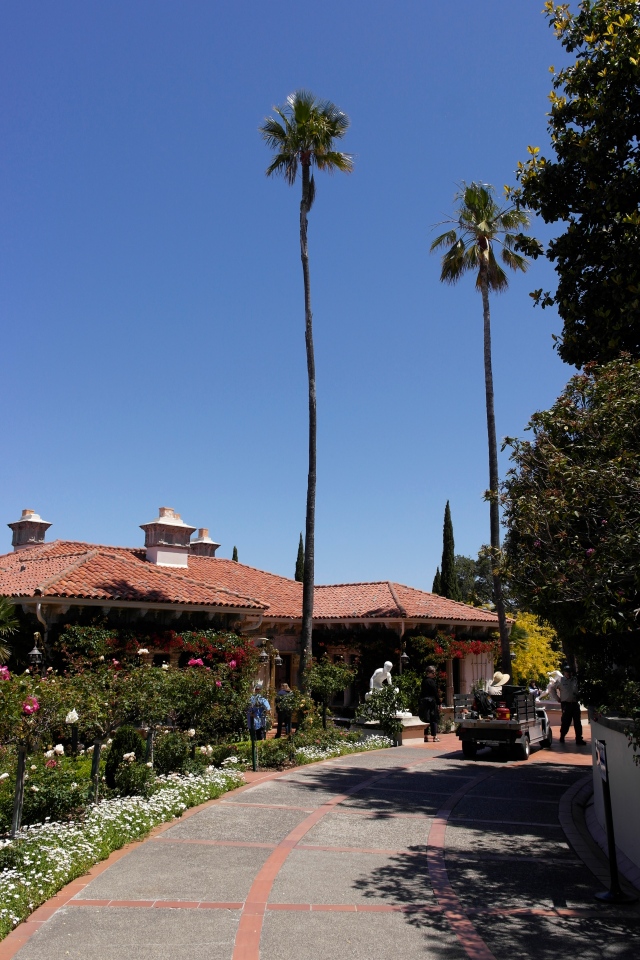 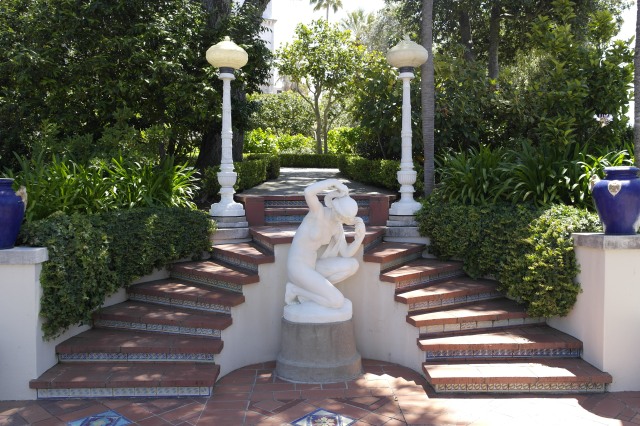 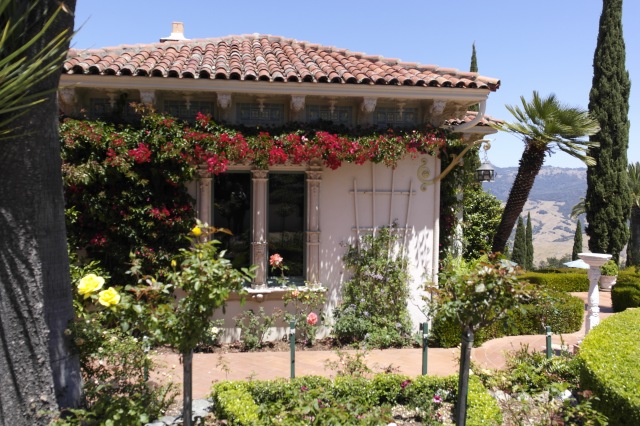 I love the pastel tennis court. 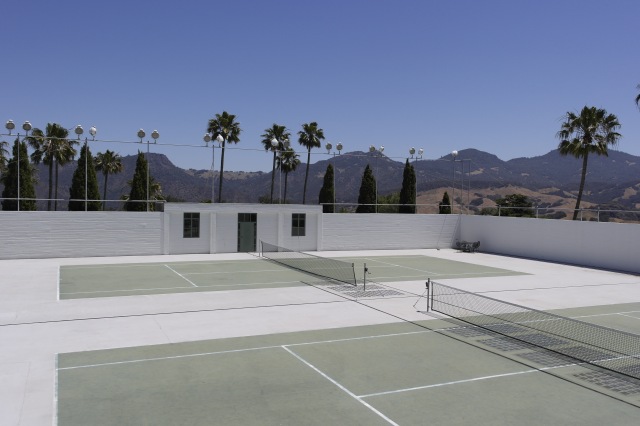 Care for a hit?

And behold, the Roman Pool: 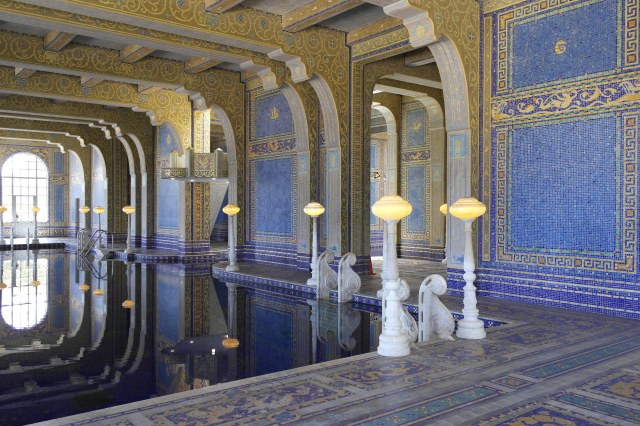 It was just so incredible, all the tiles, detail and intricate work. 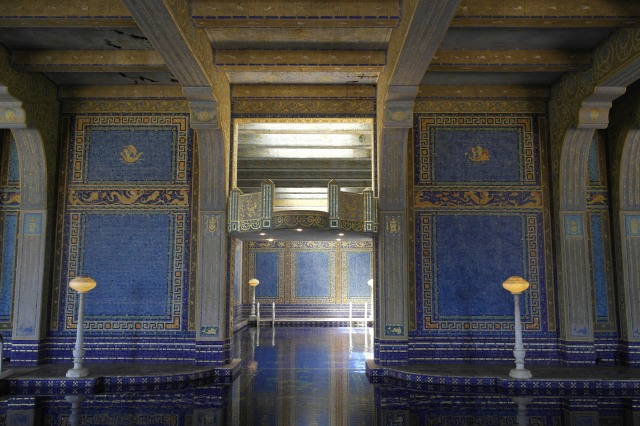 I’m starting to run out of adjectives. 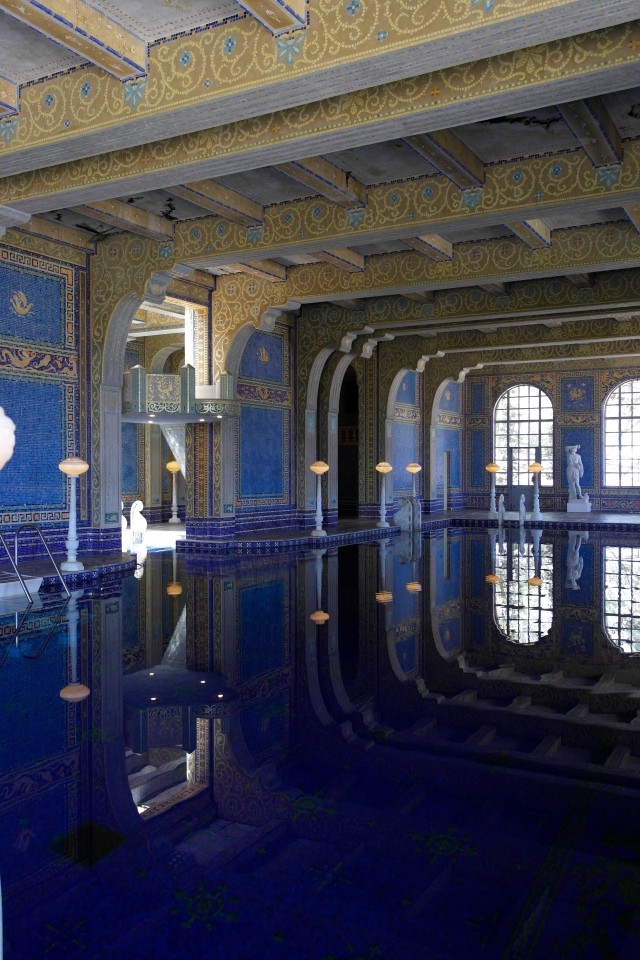 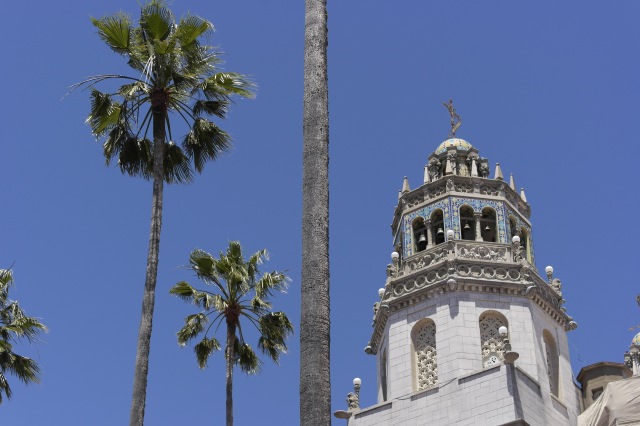 One of the castle’s towers 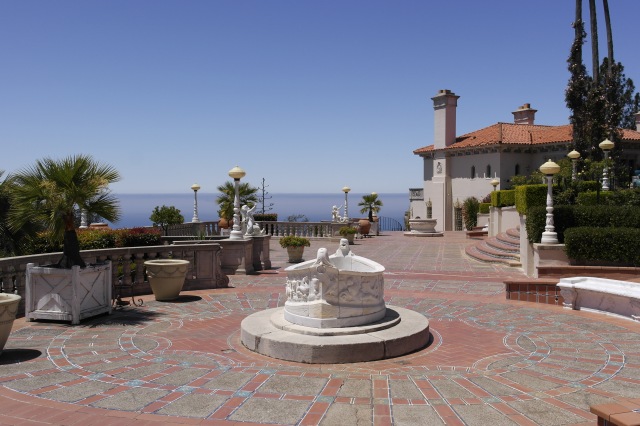 You can see the ocean from here 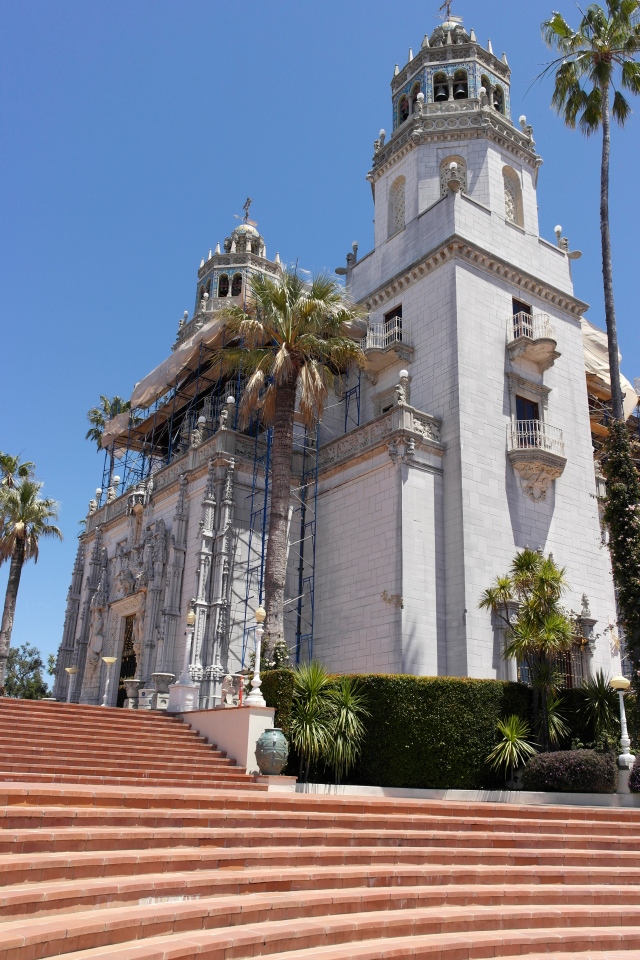 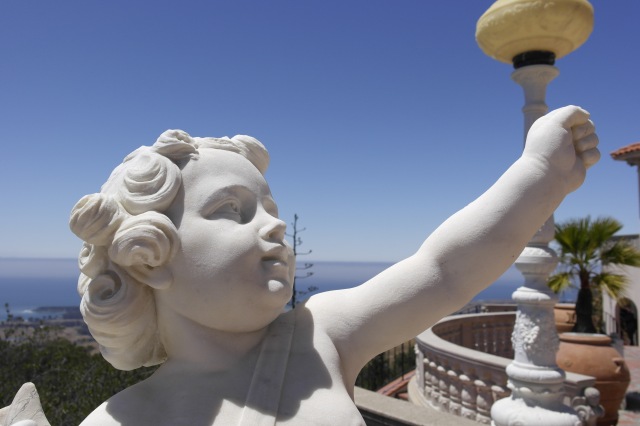 Apparently Hearst Castle does twilight tours where people dress up in 1920s-30s style. I can’t think of anything I’d rather do more! Seriously if you’re in the area, definitely go for a visit. I really didn’t want to leave.

Sorry for all the photos, but there could have been about 20 more, so count yourself lucky!

This entry was posted in Travel and tagged California, Hearst Castle, Travel. Bookmark the permalink.