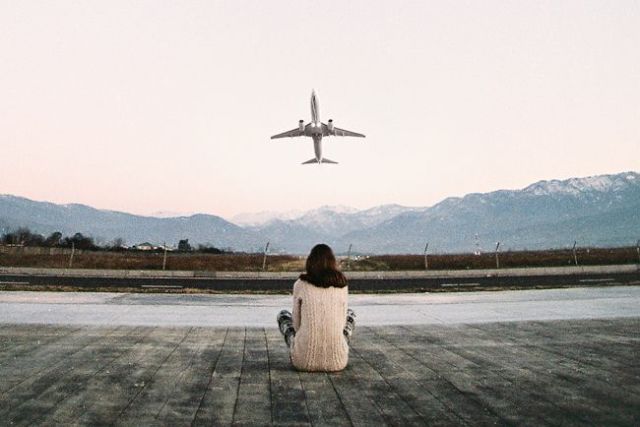 1. I have an irrational fear that the tail of the plane will scrape the tarmac upon every take off.

2. Hearing a dog bark from the luggage hold is rather disconcerting.

3. I like to put the tiny butter packets under the hot food container on my food tray to melt slightly and ensure premium spreading consistency for my bread roll.

4. The only flight I’ve successfully slept through was Bangkok-Melbourne after two vodkas and a sleeping pill offered by a stranger (sounds irresponsible but it came from a packet, and I was with my boyfriend at the time, and I feel a plane would be a very unsuccessful location to drug and harm someone).

5. I rarely salt and pepper my food, except on planes. Only to make the most of those free condiments.

6. Taking off from Coolangatta Airport in Queensland always results in the most painful of earaches. Not landing though.

7. I learnt the alcohol and sleeping tablet trick from my sister, who once managed to sleep all of the 24 hours from Melbourne to London (while I ate her food) despite a layover.

8. I never know whether to get the free (terrible) wine or the Diet Coke I know I will enjoy.

9. The best flight I’ve ever been on was Melbourne to LA with Virgin Australia. Their free snack stations are unparalleled.

10. I’ve not yet known the discomfort of travelling near a screaming baby on a long haul flight. I feel sorry for the parents who have.

11. The worst plane meal I’ve ever had was on Good Friday. I jokingly said to my travel companions “imagine if they served fish!” and they did. The entire cabin stank.

12. It makes me shudder when I see people go to the toilet on a plane in bare feet.

13. An Air France flight attendant once poured boiling water into a cup with paper towel so I could hold it under my ear and let the steam could sooth the stabbing pain. It works.

14. I cringe when people clap upon landing when the flight has experienced minimal turbulence.

15. I’ve never been on a flight when the oxygen masks have dropped. But I’ll be sure to fit my own before helping those around me if it does happen.

16. For a brief period when I was 15 I wanted to be a flight attendant.

17. Pegasus Airlines has the best (and cutest) safety demonstration video I’ve ever seen. And New Zealand, the most bizarrely sexual one.

Got some to add?

This entry was posted in Travel and tagged Air Travel, Airplane, Plane, Travel. Bookmark the permalink.

7 Responses to 17 musings on air travel