We had almost exactly 48 hours in Melbourne after arriving at lunchtime last Sunday from Hobart and flying out to Perth again at lunchtime on Tuesday. So I did what I love to do most in Melbourne; eat.

Mum picked my boyfriend Andrew and I up from the airport and we headed straight to the Gold Leaf in Preston for Yum Cha. After stuffing myself with dumplings I was worried I wouldn’t be hungry for an early dinner before the football, but my fears were misguided. I was able to chow down happily on curry at 6pm at Red Pepper on Bourke Street in the city. Phew.

We got to the MCG and I kept an eye out for the hot donut van but sadly, didn’t spot it. We took our freezing seats inside the G and were presented with this sadly optimistic banner from Carlton:

Everything? Except for perhaps, winning this game?

Australian Football League fans will know of the long standing rivalry between Collingwood and my beloved Carlton. This was the one match I will probably see all season due to living in the middle of nowhere and of course we lost. Carlton has been doing a lot of that lately.

Collingwood, who seem to be on some kind of mission to turn average mid-season AFL games into SuperBowl-esque extravaganzas, started with some pre-match fireworks and hip hop dancers gyrating away in hideous Beetlejuice/Robin Thicke style leggings. An assault to the senses, to say the least.

After losing we went home to defrost and sleep.

The only plan I had for Monday was to eat as much as physically possible. I had a cup of tea and a piece of toast before we headed into the city. We did some walking around, grabbed a coffee and I spotted a store on Swanston Street that sold South Melbourne Market dim sims, which are the best dim sims available in the world. And we didn’t have to traipse all the way to South Melbourne for them. First win of the day.

We did the ‘Melbourne’ thing and checked out some sweet lane ways.

Me without a head. 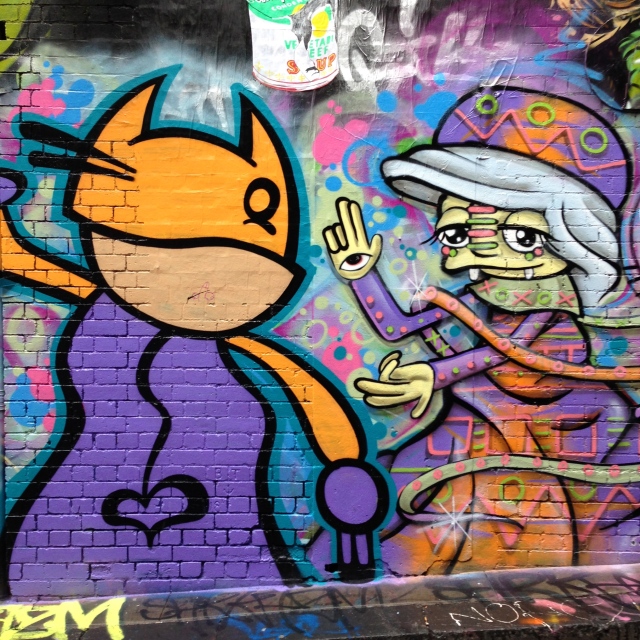 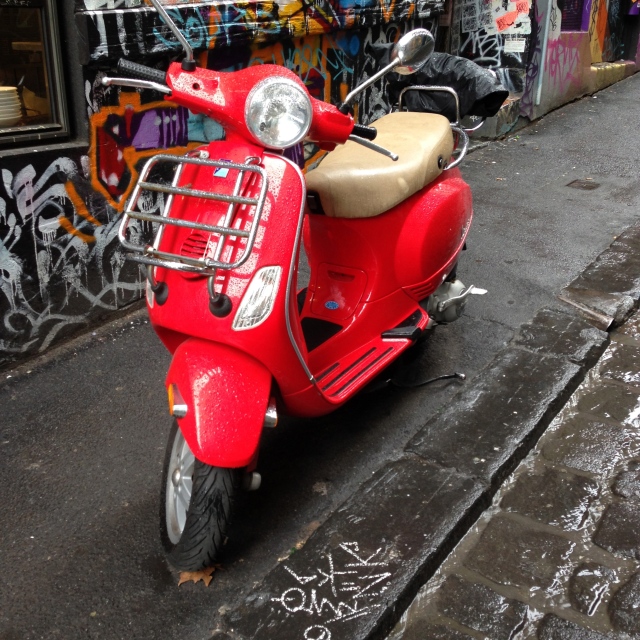 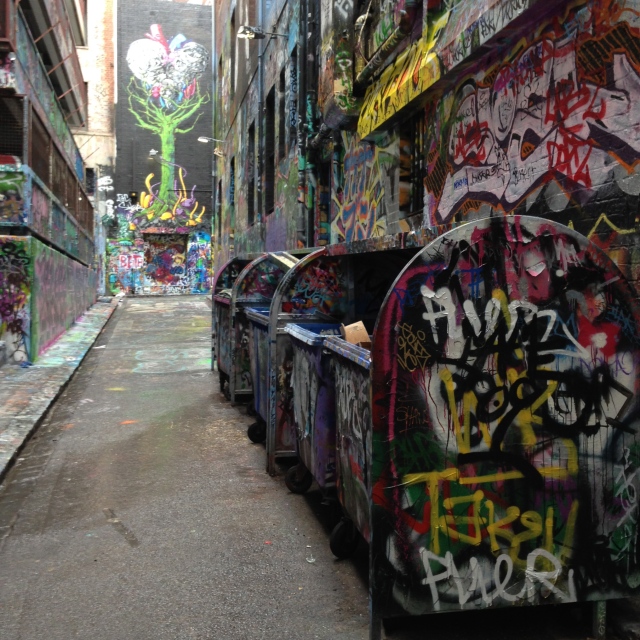 To work up a decent appetite we walked all the way to Phat Brats in Brunswick Street.

We quickly devoured the Phat Brat (bratwurst sausage, pulled pork, bbq sauce and apple slaw), the Chilli Dog (wagyu beef sausage, spicy beef, cheesy sauce, chilli sauce and spring onions) and the Salsa Fries. It was all delicious except for the wagyu beef sausage which was kind of dry and average.

It’s weird, I didn’t feel at all stuffed after eating all that, which probably says a lot about how much I had been eating in general. So we wandered up Brunswick Street in search of a shining beacon that would yield dessert.

And we found it.

N2 is a fancy gelato place that makes ice cream with all kinds of science that I don’t understand. Liquid Nitrogen etc. Andrew had the cookies and cream cheesecake, I had the Ferrero Rocher one. 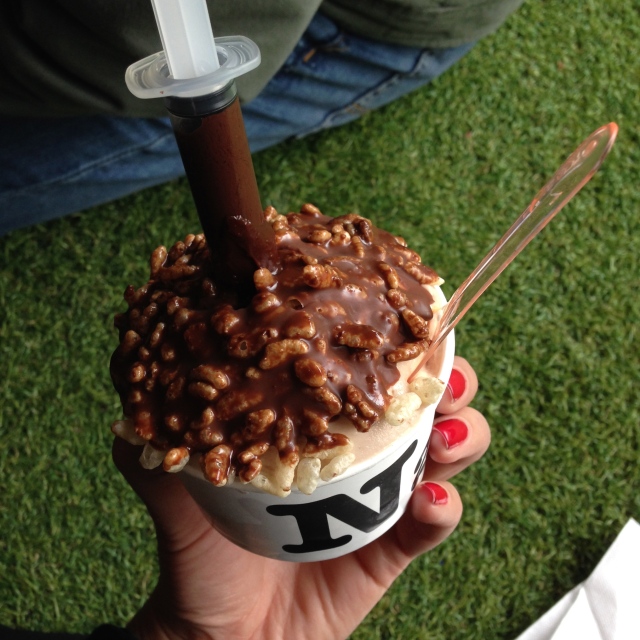 After that I was full. Finally. So we did some more walking.

Trams are way cuter when you don’t have to use them to get anywhere.

We stopped to say hi to a former colleague of mine. And to step inside St Patrick’s Cathedral, which I had never done. We also had a coffee at Melbourne’s iconic Pellegrini’s. Everyone in there spoke in Italian, it was glorious.

We then met one of my all-time favourite people, Tarn, at Chin Chin for dinner. I didn’t photograph dinner because my phone was pretty much dead by then but I managed to snap dessert:

Palm sugar ice cream sundae with honey comb in the foreground and sago behind it.

We then had a few red wines (for warmth mostly) at Bar Ampere before hugging farewell and jumping on our respective trams. The 109 tram didn’t disappoint and transported us along with some of its finest clientele who swore loudly and swapped fun tales of inflicting serious injury onto others. Delightful souls they were. I was most relieved when they alighted in Collingwood… how telling. My utter contempt for using the public transport system remains strong.

The next morning we walked down the road to Mr Hendricks, a delightful new(?) cafe in Balwyn, for the final meal. I had coconut rice porridge and a cup of English Breakfast.

It was just as delicious as the time I had it the weekend before. Andrew had an eggs/avo/feta combination.

After breakfast we jumped in a silver top (taxi) and headed to the airport. When we got to Perth I honestly felt like crying. But I cheered up when we sat in the exact spot in the departures lounge where we had met four months earlier and had a little re-enactment.

“So where are you flying to?”

Such an excellent trip. Need to start planning the next!

3 Responses to 48 hours in Melbourne